13 Guys in One Night at a Bath House in Cleveland 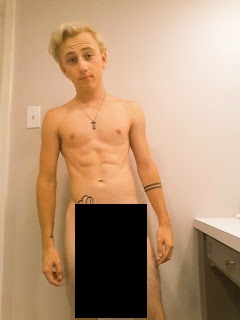 On the way back from New York earlier this week, we stopped in Cleveland.  I wanted to go to the Flex Club, a great gay resort/bath house.  Bob didn't want to go, but he said it was ok if I went by myself.

It's hit and miss.  Sometimes I can wander around the video room, the dark room, the leather room, and the saunas for two hours and get completely ignored by everybody and everything.  Sometimes I'm very popular.

I think of a night at the Flex Club as a success if I meet five guys in two hours.  But the other night, I was with 13!

1. Within a minute of going upstairs to the video room,  I was kissing a red-haired twink with a scrawny body but an enormous Mortadella. 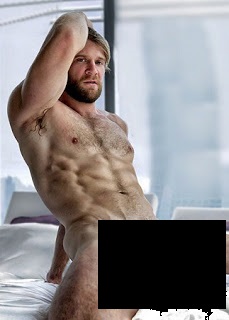 2.That wasn't unusual: I tend to attract twinks.  So I still didn't know if this was going to be a good or bad evening.

A few minutes later, in the dark room, I saw a very handsome, hairy-chested guy in his 30s with someone else, so I joined in.  The second guy left, leaving me with Hairy Chest.

3-5.  I sat on a bunk in the dark room, and an older black guy approached.   He brought his two friends and "ordered" them to pull it out and let me go down on them. 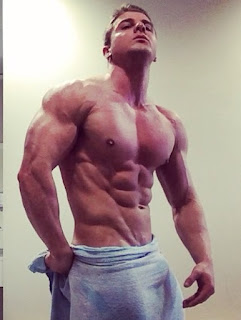 9. A very muscular guy in the sauna wanted me to go down on him, but it was too hot in there, so we went back to the dark room.

The full story, with 10 nude photos and explicit sexual situations, is on Tales of West Hollywood. 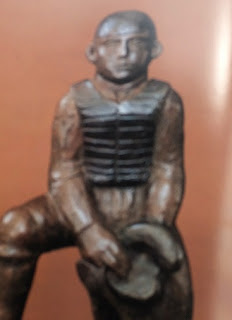 I saw it at the Baseball Hall of Fame, in a painting called The Baseball Player (1940), by William Zorach.

It's supposed to be a baseball glove, I suppose, but it's hard to see it as anything but a penis.

William Zorach (1887 to 1966) was a Lithuanian-American sculptor and painter. He and his wife Marguerite lived in Paris during the 1920s, where they befriended many of the gay expatriots, such as Gertrude Stein and James Baldwin.  Later they moved to Greenwich Village, and then to Provincetown as it turned into a gay enclave.

There aren't a lot of penises in his work. "Male Youth" is an exception. 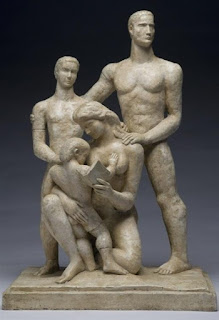 Usually it's discretely hidden, as in the nude "Pioneer Family." 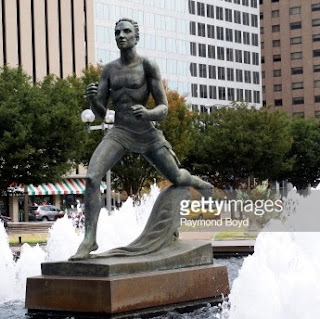 Or covered up altogether, as in "The Runner." 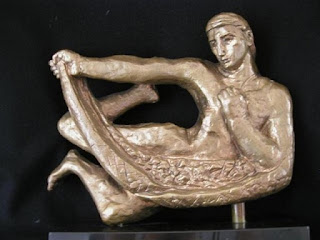 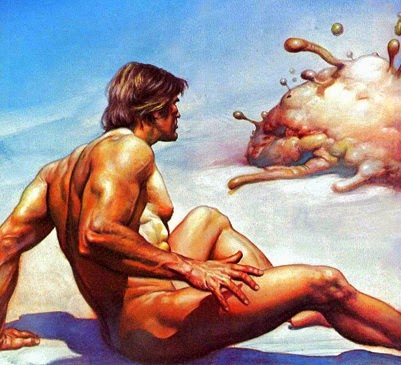 During the 1970s, the covers of your Conan, Tarzan, John Carter, Doc Savage, and miscellaneous barbarian hero books were likely to feature a heavily-muscled, naked or nearly-naked muscle-god fighting off monsters, giant snakes, or weird gods, usually with a naked steatopygous lady clinging to his feet (it's really hard to fight that way, but it keyed into the heterosexual fanboy's fantasy of conquest).

If they were comic books, the illustrator was Frank Frazetta.

If they were print novels, the illustrator was Boris Vallejo. 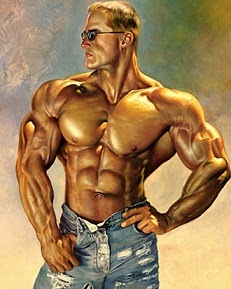 Both started out as bodybuilders, both began their careers in 1954, and moved into the field of fantasy illustration in the 1960s. They are neighbors, in Scranton and Allentown, Pennsylvania. 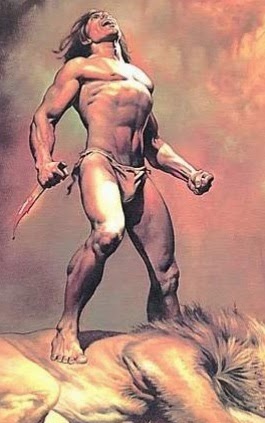 He drew covers for many paperbacks, as well as posters for such films as Barbarella (1968) and National Lampoon's Vacation (1983). 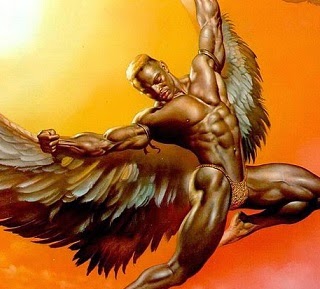 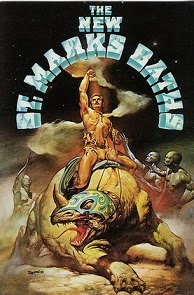 A friend of the gay community, Vallejo drew this poster in 1979 to commemorate the renovation of the famous St. Mark Baths in New York.

His wife, Julie Bell, is also a former bodybuilder and illustrator, who has a similar style, except her women aren't clinging to the legs of muscle gods: they're female bodybuilders and barbarian heroes in their own right. She has illustrated over 100 covers for science fiction novels since the 1990s.
Posted by Boomer 3 comments:

My Mother the Car 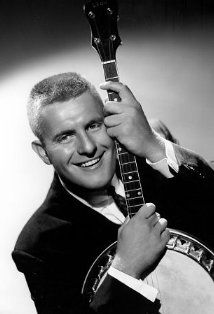 I don't know why people think of Jerry Van Dyke as a failure.  Sure, he never reached the Emmy-winning tv-classic status of his older brother Dick, but he's had a 50 year-long career, starting with beach movies in the 1960s (Palm Springs Weekend) and going on to starring roles in at least a dozen tv series, including eight years on Coach (1989-1997) and five years on The Middle (2010-2015). 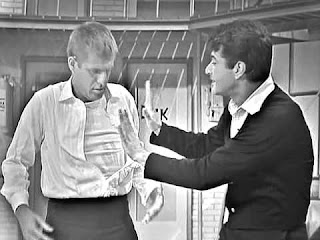 Besides, he was considerably more attractive than his gawky older brother. 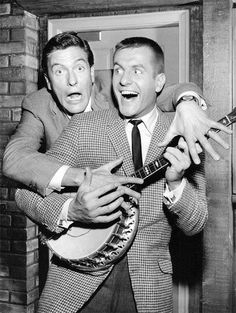 Plus, in spite of his two long-term marriages to women, there's a.bigger gay subtext in his work than you can find in Dick's, such as a starring role on The Judy Garland Show, and the big brother-little brother acts

Maybe because of a few poor decisions, like rejecting the roles of Gilligan on Gilligan's Island and Barney Fife on the Andy Griffith Show.

The program he chose instead, My Mother the Car, is universally lambasted as ridiculous, although really, was the premise any more far out than Bewitched, I Dream of Jeannie, Mr. Ed, or for that matter, Gilligan's Island.

A man discovers that a car is a reincarnation of his mother (or maybe her ghost is trapped in the car -- it's really not explained in any detail).

Men obsessed with their mothers: 1960s code for gay.

Watching it today, it doesn't seem particularly terrible, for a 1960s sitcom.  The mother thing is kind of creepy, but the main problem is, it's just dull.  Mom doesn't provide the comedic foil that Mr. Ed did, and the main antagonist, an obsessed car collector, isn't chummy enough to provide a gay subtext or evil enough to provide any conflict.