"A Jazzman's Blues": What happens when the writer/director tries to supress a gay subtext? 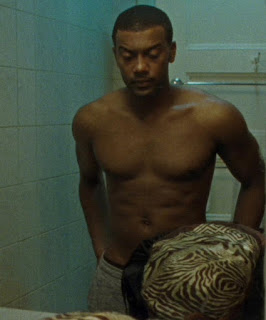 A Jazzman's Blues, on Netflix, has another of those icons that looks like it could be two guys about to kiss or about to fight.  It's set in the 1950s, so I don't hold out much hope of gay characters, but the blurb says "a tale of forbidden love."  I'll go through it on fast-forward to see if that forbidden love is gay.

42: A white guy wakes up in Jazzman's house, sick, muttering in German. Jazzman fetches him some soup.  He explains that he is a booking agent, hired to get Jazzman's brother a gig at the El Capital.

47: Later, at the bar, White Guy (Ira?) hears Jazzman sing and gets a swoony "love at first sight" expression.  Forget the brother -- I'm signing up the hunk!

Jazzman doesn't kiss any other girls through the course of the movie.  Maybe he's moved on to Ira? 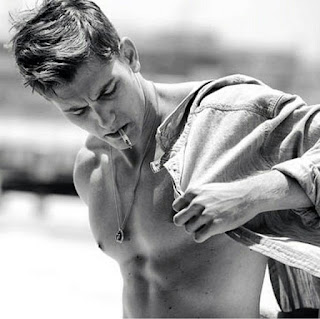 58: A white guy (Maybe Brent Antonello?) and his girlfriend kiss.

64: The white guy and his girlfriend kiss again, with tongues lolling around in each other's mouths for about 2 minutes.   I'm halfway through.  When will the two men get around to kissing each other? 76: Now it gets good.  Jazzman and Ira (Ryan Eggold?)  by their car in a field. Ira cries: "I helped many people.  You can help your mother."  Hand on shoulder, a hug.

78: They're at a jazz club.  It's time for Jazzman to sing (took him long enough), but he doesn't want to.  Ira talks him into it, touching his hand and shoulder.  "Think of Leanne.  Think of the woman you love.  Then you will sing."  Hey, that's no way to talk to your boyfriend!

"What should I sing?"  Jazzman asks.  Ira gazes into his eyes. "Anything that makes you think of me...um, I mean her." You're sending mixed messages!  He puts his arm around Jazzman and escorts him onto the stage.

80: Ira tells about how he lost his wife and kids in the Holocaust.  Can't let anyone think that he's attracted to Jazzman.

94: In his dressing room, Jazzman and Ira are arguing over performing in his hometown for his mother.  Ira offers to bring her here, but black people are not allowed in the club (except as performers).  But if he goes home, he's in big trouble for some reason.    "Is this about your mother or Leanne?"   Why, are you jealous?

104: Arguing again, this time because Jazzman's brother always interrupts his performances with his own songs.  Also he owes the club a lot of money. 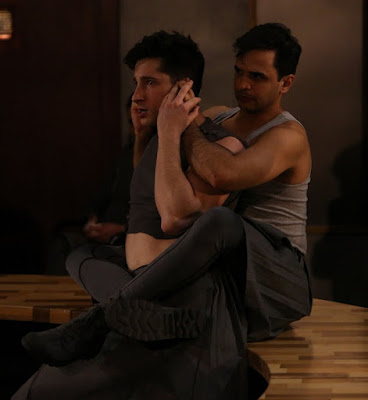 I can't tell who plays the brother, so here's cast member Kario Marcel  and Christopher Cassarino in a NYU production of Henry V.  Never saw the play, but it looks like Henry has a boyfriend.

108: Ira intervenes in a fight between Jazzman and his brother.

110: Jazzman has some sort of intervention with his brother, giving us the movie's only beefcake shot.

120: Spoiler alert: Jazzman goes back to his hometown, and is lynched.

Gay subtext:  Jazzman and Ira act like they are in love, but every "gazing into each other's eyes" moment is countered by a reference to a dead wife or "the woman you love."  Plus Ira does not appear in the first 40 minutes, or in the last ten minutes. It looks like writer/director Tyler Perry was trying to suppress the gay subtext, and almost succeeded.