Going to Movies in 1999-2000: Christian Bale kills, Matt Damon kills, Edward Norton fights, and I see (some of) the most homophobic movie of all time August: The Sixth Sense.  Psychiatrist Bruce Willis counsels a little boy who "sees dead people."  Unfortunately, they look like they looked at the moment of their death, gaping wounds and all.  No gay characters, but it's still the best movie of the year, with a plot twist that I didn't see coming. 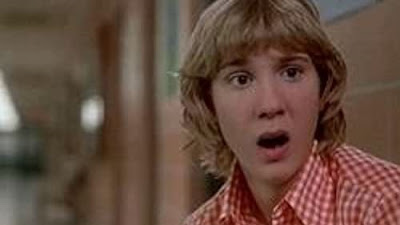 August: Detroit Rock City.  Four KISS fans try to make it to a concert while fighting Catholic-fundamentalist anti-KISS relatives and protesters.  One might expect some buddy-bonding gay subtexts, but in fact the boys are extremely homophobic.  I felt like I was back in the 1980s.

September: American Beauty.  Kevin Spacey perves on a high school girl and dies, a "homosexual" dies of self-loathing, and there's a plastic bag blowing in the wind.  It won six Academy Awards.

September: Breakfast of Champions.  An incomprehensible novel by Kurt Vonnegut transformed into an incomprehensible movie starring Bruce Willis and Nick Nolte.  Can't get more artsy than that, right? I don't remember what it was about, just that it appeared in only one theater in all of Manhattan, and only for three days.

October:  Three Kings.  Not a Christmas movie, a war drama.  Mark Wahlberg and his three friends are in Iraq, trying to steal some gold that Saddam Hussain stole from Kuwait. 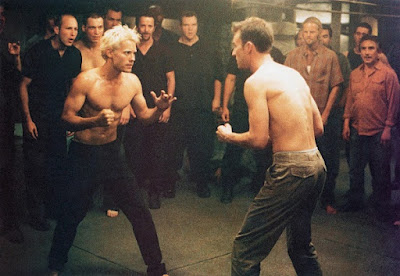 October: The Fight Club.  Edward Norton buddy-bonds with Brad Pitt through an underground fight club where guys wail on each other to demonstrate their masculinity.  Some nicely toned physiques fighting shirtless.   But the gay subtext is ruined when Norton finds salvation with The Girl of His Dreams.  By this point, I was thinking that, Oscar party or not, artsy movies were not my cup of tea,

December: Topsy-Turvy.  I know all gay men are supposed to be obsessed with Gilbert & Sullivan, but I've only seen one of their operettas, and that was a couple of years ago.  This is a backstage drama set during rehearsals for The Mikado.  It's not as zany as it sounds.

December: Man on the Moon, a biopic of the late comedian Andy Kaufman.  I liked him in the 1970s sitcom Taxi, but never realized that he was such a jerk, playing nasty pranks, deliberately antagonizing audiences, and pretending to be other people who were even greater jerks.  Sure, biographies are supposed to humanize their subject, but to make fans hate him? 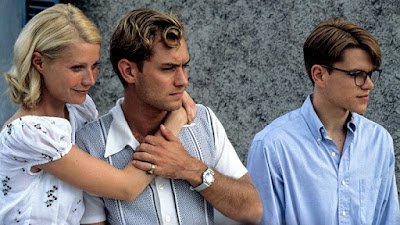 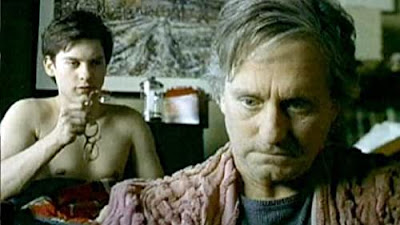 February: Wonder Boys.  No wonder boys in this movie, just a professor of creative writing with writer's block and a lot of clandestine heterosexual affairs. There's also a quiet, shy, closeted gay guy (Tobey Maguire) who doesn't get a boyfriend, but has sex with Robert Downey Jr.

May: Hamlet.  Ethan Hawke stars as the Prince of Denmark.

July: Chuck and Buck!  The most homophobic, insulting, and down-right terrible movie of all time!  I walked out halfway through.  Rant appears after the break.

Chuck and Buck were childhood buddies, see, and engaged in some same-sex activity, but then Churck grew up, which means turning heterosexual and getting a wife.  Buck (World Champion Homophobe Mike White) is still stuck in gay childhood.  "Gay" means arrested development, perpetual childhood, cut off from the mature heterosexuality of adulthood.  The blatant homophobia wouldn't have been nearly so grating except that this movie was advertised in gay magazines, inviting gay men to come to the theater to be insulted!  Plus writer/star Mike White is "openly bisexual" and massively self-loathing.  How did he find out that gay people have magazines?  Surely they're not mature enough for such a complex enterprise!

The message is loud and clear: mainstream media hates us.