"Murder is a Drag": Jonathan and Jennifer Don't Solve a Murder, Max Does "Some Like It Hot" 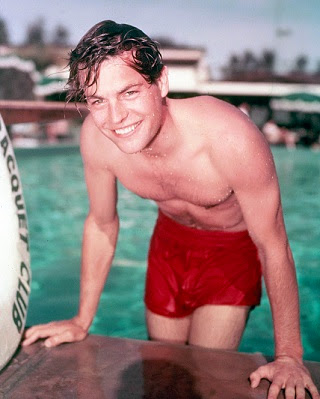 As promised, here is my review of Hart to Hart, the 1980s whodunit that just dropped on Amazon.  Decider promsed me bare chests, 1980s glitz, ridiculous plots, and lots of gay double-entendres.  I choose Season 2, Episode 9, "Murder is a Drag," because it's probably about a murder at a drag club.

Scene 1: Jonathan ("he's quite a guy") and Jennifer ("she's gorgeous") are getting ready for the opera, one of those lifelong passions that people have on tv for one episode, never to be mentioned again.  No hairy chest yet!  Jonathan hates opera, and tries to lure her into bed so they'll miss it, but no dice.  Then he tries "I have nothing to wear!", but she demonstrates his 350 suits.

Scene 2: An endless line of elegantly dressed male-female couples heading into the thteater.  Jonathan has lost the tickets!  They rush to buy replacements, but it's sold out.  Well, maybe someone has some extras.

At that moment a thief picks a man's pocket and finds some money and two tickets.  Jonathan thinks he's a scalper and buys them for $100. 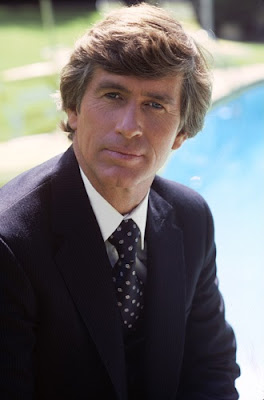 Scene 3:  Pan of the audience. Suddenly the man sitting next to Jonathan offers him "The first $100,000 now. Call this number on Friday for instructions."  Then he falls over, stabbed in the back.  A murder!  Must be Tuesday!

Scene 4: The theater has been cleared.  Jonathan, under arrest for murder, is being interrogated.  I guess they couldn't afford a police station set. "I'm no murderer.  I'm Jonathan Hart, self-made millionaire, quite a guy."  The cop is not impressed.  Then their police confidant, Lt. Kirkwood (Jim McMullen), shows up to spring them.

Kirkson explained: you got the seats of a hit man who was hired to assassinate an important person (we don't know who).  Harry Carney, a man connected with the scheme, tipped us off, and was murdered for it. Wait -- why would they murder him at the opera, in the seat next to the hit man? Wouldn't that blow his cover?

At the police station, they discuss the case further. Jonathan: "This whole night has been a disaster.  First I can't find anything to wear to the opera, and now a murder.."  I thought you'd be pleased ("their hobby is murder").  "And they'll be expecting me to make a hit."  "Make the call on Friday, and we'll trace it and find the baddies."

Scene 6:  Baddie Mr. Six, dressed in a silk bathrobe, playing solitaire.  His assistant informs him that the hit man has received his payment.  He'll call on Friday for the details, then kill the "courageeous district attorney," and you can continue with your drug business.

1. If there's enough evidence to indict, why would killing the d.a. change anything?  2. Why not just tell the hit man who to kill, without all the weird complications?  This is ridiculous. Then the real hit man, McGarity (James Luisi), shows up, blustering about the mixup.  "So I'll do the original hit, plus take care of the guy who got my seat.  On Friday we'll trace his call and find him and kill him."

Scene 7:  Jonathan at work.  Not a very elegant office -- where's the panoramic view of L.A.?   Detective Kirkson drops by for the call. Hit man McGarity: "You're invited to a costume party tomorrow night.  Your target will be there.  You'll be told who it is at the time."  Why not just tell him now?

Turns out that the trace worked for the baddies -- they know that it's Jonathan Hart -- but not for the cops.

Scene 8: Out in the parking lot, Detective Kirkson took Jonathan's assigned parking space.  He offers to move his car -- and boom!  It's only been a few minutes.  How did the baddies have time to plant a car bomb?

Scene 9:  The butler Max ("I take care of them") is serving breakfast.  There are three settings -- he ate with the bosses!  How egalitarian!  But now he vanishes.  Jonathan and Jennifer discuss all of the bigwigs who will be attending the costume party tonight.  As a L.A. bigwig, wouldn't Jonathan have been invited anyway?

Scene 10:  The Harts check out the mansion where the party will be held.  At the same moment, two new cops arrive ,on order to protect them:  Sgt. Ewell and Sgt. Tate (Norm from Cheers!)  How did the cops know that they were going to the mansion?  If they were tailing the Harts, they would certainly notice, right?

Inside, the hostess provides them with the party guest list.  Not much help, there are 500 names on it (not the Harts?  these people aren't as fancy as they think. She gives them the names of several guests with enemies who might want them dead.

Uh-oh, the Big Bad Mr. Six and his assistant are working as caterers.  Wait -- why would they infiltrate the party?  They hired a hit man to do it.

Scene 11:  Time for the party.  The Harts are dressed as Rhett Butler and Scarlett O'Hara.  Max wants to go, too, but Jonathan says no, too dangerous.  He leaves.  Suddenly the Big Bad's assistant arrives to take Mrs. Hart hostage and force Jonathan to do the job.  Wait -- the real hit man said he would do the job, and then kill Jonathan. Why force a random stranger to do it?  He wouldn't  have the skill set. This doesn't make sense.

Max returns to find the Harts missing.  Deducing that something is wrong, he heads to the party.

Scene 12:  Assistant takes Mrs. Hart to a very roomy, well-lit caterer van and compliments her gorgeousness.  She counters that "she is one lady who knows how to take care of herself," but not to worry, he's just going to tie her up.  But after Jonathan is killed and she's a widow, maybe....  So he only rapes single women?

Inside the party: a very small room, 15 or so heterosexual couples in ridiculous costumes disco-dancing.  The cops have come as Laurel and Hardy. Where's the vsst ballroom with 500 people?

Scene 13: Max isn't allowed into the party -- no costume.  So he sneaks into the service entrance -- unguarded -- and up the stairs to a bedroom, looking for a bedsheet to become Julius Caesar.  He has to hide in the walk-in closet when Batman and Wonder Woman come in for sex.  Batman: "It's ok. Robin and I are separated."  He means a female Robin, no doubt, but it's still a gay reference. 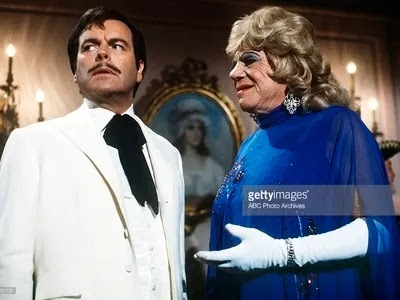 Next option: the closet contains dresses, a wig, and and a makeup table, so Max dresses in drag.  He exits, past the kissing couple.  "Where did you come from?" Wonder Woman shrieks. "I came out of the closet."  Har-har.

Meanwhile,the real hit man/bartender drugs the cops' drinks. Another cronie, dressed as Red Riding Hood, asks Jonathan to dance so she can hand him the gun and tell him that the target is the District Attorney.  Why not just tell him...oh, never mind.  This is ridiculous.

In order to talk to Max, Jonathan asks him to dance.  "I do this every night," Max says.  "You lead."  So Max dances with men a lot?  Or is he joking?

The Tin Foil king does a Some Like It Hot, importuning Max with plaints of love.  "She's not who you thnk she is," Jonathan warns.  "What woman is?"

Scene 14: At 10:00 pm, Jonathan pretends to shoot the Courageous District Attorney.  Then Hit Man shoots at him and misses (very inept hit man, innit?).  Everyone runs out in a panic. Presumably more cops are on hand to arrest the hit man and the Big Bad.  Jonathan and Max rush to rescue Jennifer, but she has already freed herself.

The Tin Foil King follows and asks Max to dance.  He consents. The party is still going on after the shootings?

Scene 15: After-party milk and cookies.  How wholesome!  Max comes in fuming, because the Tin Foil King was "all lovey-dovey" while drunk, but when he sobered up, he dumped Max.  "Not even cab fare home."  Wait -- Max drove to the party.  Did they go to the Tin Foil King's place for a make-out session?

They stare, thinking that Max has come out as gay. Jonathan gives him tips on how to deal with a broken heart. But I doubt that this will ever be mentioned again.

Glitz: None.  The Harts live rather modestly.  Maybe they get glitzier in later seasons.

Gay References: The whole Some Like It Hot homage.