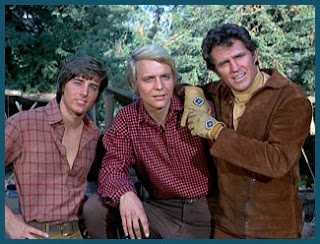 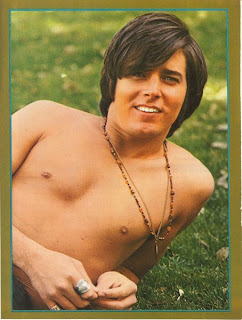 Here Come the Brides (1968-70) was a quasi-Western that delivered lots of bare chested bravado and created two teen idols. In the back story, the idyllic frontier Seattle of the 19th century is inhabited by hundreds of tall, broad-shouldered men in tight jeans, but no women except the matronly Lottie (Joan Blondell), who runs the local saloon. So far it sounds like a homoerotic Eden, but then the three Bolt brothers, Jason (Robert Brown), Joshua (David Soul), and Jeremy (Bobby Sherman)  get the idea that some of the men might be interested in women, so they arrange for some to be transported from Boston. These aren’t mail order brides, however; they live in a dormitory with chaperones, waiting to be courted nice and proper.

Few courtships and fewer marriages actually occurred during the show’s two-year run. Instead, plots mostly involved the brothers facing shady lumber dealers, crotchety prospectors, decadent Shakespearean actors, wannabe Mormons, snake-oil hucksters, and miscellaneous scalawags. Bobby Sherman played youngest brother Jeremy, a shy outsider and a stutterer, as cuddly as a teddy bear, yet muscular enough to wander around Seattle with his shirt off. Although he was sweet on one of the brides, his plotlines were never heterosexist. He rescued boys from marauders and evildoers, or else got carried off by the marauders and evildoers himself, tied in a back room while his older brothers mounted daring rescue. And sometimes he sang. 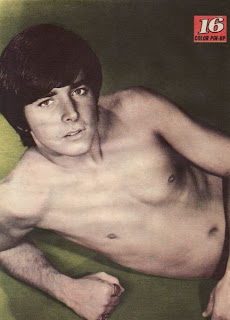 Born in 1943, Bobby Sherman had been performing since the mid-1960’s, but his career didn’t take off until he became Jeremy Bolt. Within a year he had four charting singles, and his anthem, “Julie, Do Ya Love Me?,” hit #2 in September 1970. His first two albums were boring: most songs had “girl” as every other word and even a titular protestation of Bobby’s heterosexuality, such as “Little Woman” or “She’s a Lady.” 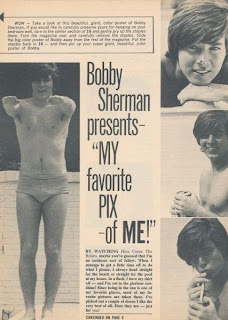 The only gay content was in “Hey, Mr. Sun": the lonely singer notes that “I've been running all my life / In search of something I can't find,” but then he looks up and realizes that “Mr. Sun” will always be beside him. It is only a small step from the sun to a human boy who will “tap me on the shoulder and whisper to me from behind / Remind me of the yesterdays I tried alone.”

With Love, Bobby (1970) and Portrait of Bobby (1970) were more interesting, with gender-neutral songs like “Spend Some Time Loving Me” and “Message to My Brother,” as well as the strangely seductive “Sweet Gingerbread Man,” originally sung in the gay-friendly Magic Garden of Stanley Sweetheart, starring Don Johnson (1970).  Pop music aimed at preteens often associates sexual desire with food, as in Archies’ "Sugar Sugar" (“You are my candy girl”) and the 1910 Fruit Gum Company’s "Yummy" (“I’ve got love in my tummy”). And in this case the object of Bobby's desire is “all tasty and tan, sweet gingerbread man.”

In 1971-72 Bobby starred with Wes Stern in the gay-subtext Getting Together.   When his teen idol star faded, he became a EMT.

Married and divorced twice, Bobby is reputedly bisexual.  According to a 2011 biography, he and gay actor Sal Mineo became lovers during the 1970s, before Sal settled down with his long-term partner.
Posted by Boomer

Email ThisBlogThis!Share to TwitterShare to FacebookShare to Pinterest
Labels: 1960s, all my fans, brothers, Western