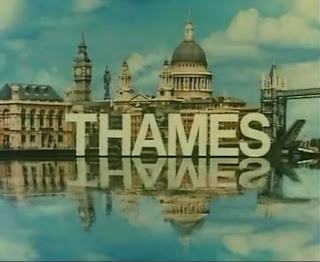 In the spring of 1977, during my junior year in high school, I couldn't wait for 10:00 pm on Thursday nights, for the logo of Thames TV, with Parliament, Big Ben, St. Paul's Cathedral, and London Bridge rising from a cloud-covered Thames, and the Britcom Father, Dear Father (1968-73).

Although I don't remember it fondly as "good beyond hope," I have never laughed so hard at a tv series.  My parents finally forbade me from watching it in the living room, where they would be disturbed in their bedroom nearby. 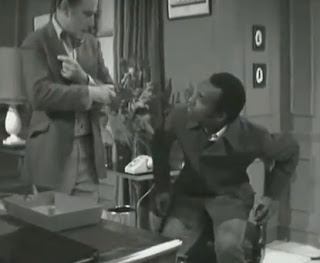 Anna and Karen are looking after the pregnant cat of their friend Andrew (Clifton James), who is black, and Patrick thinks one of them is pregnant.  He interrogates Andrew, who says that when the babies come, he'll "keep the black ones and give the rest away."

Anna takes her own apartment, but when Patrick calls, neighbor Justin (Richard Fraser) answers the phone, and he thinks they're living in sin.

Karen and her boyfriend Howard (Richard O'Sullivan, a future Dick Turpin) are going camping, but Patrick thinks they're going to get married and live in a tent. "But what if children come?"  "We'll just chase them away." 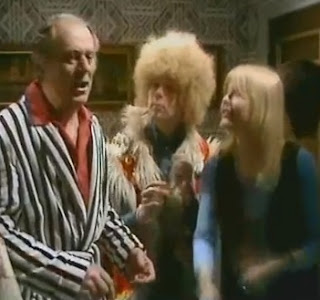 Patrick disapproves of Anna's hippie boyfriend Dumbo (Brian Godfrey, who has made his career in drag) and tries to hook her up with a more conservative boy, but instead the boy's mother thinks he is proposing marriage.

Not a lot of beefcake, and a lot of hetero-shenanigans going on.

But there were three points of interest:

1. The other British Invasion series were science fiction or anarchic comedies, but Father, Dear Father was set distinctly in modern Britain.  Patrick and his family live in Hampstead, a northern suburb or London.  I had not yet been to Britain, or anywhere outside the U.S. except Canada, so the glimpse into another country was fun and exciting.

2. Patrick displayed no heterosexual interest of any sort.  He had a number of male friends, including a ne-er do well brother, but the women in his life consisted of his housekeeper, his agent, and his draconian ex-wife.

3. Anna and Karen were gleefully tolerant of anyone and everyone.  None of their friends every specified that they were gay, but many could have been.
Posted by Boomer