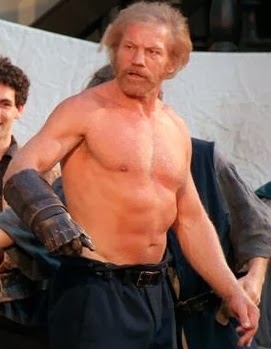 Jules Verne is most famous today for his science fiction novels, like 20,000 Leagues Under the Sea and The Mysterious Island, but during his lifetime his biggest fame came for a romance, Michel Strogoff, or Michael Strogoff: Courier for the Czar (1876).

It was translated into a dozen languages, and there are film versions in English, Spanish, French, Italian, and Turkish. The 1970 French-Italian version starred counterculture beefcake icon John Phillip Law (the nude angel in Barbarella), and the 1975 German version rugged bear Raimund Harmstorf (left). 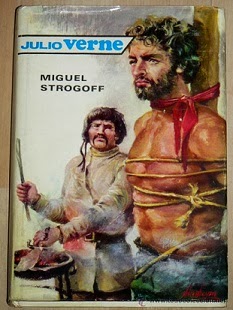 The plot sounds unrelentingly heterosexist:  In "contemporary" Russia, Tartar rebels have taken control of Siberia, and the governor, brother of Tsar Alexander II, is trapped in the besieged city of Irkutsk.  Michael Strogoff is assigned the task of traveling across enemy-occupied territory to warn him of a plot to blow up Irkutsk.

On the way he meets and falls in love with Nadia, who is traveling to meet her exiled father.  They are captured by the Tartars, who decree that Michael be blinded (in a shirtless scene that appears on almost every book cover and movie poster). 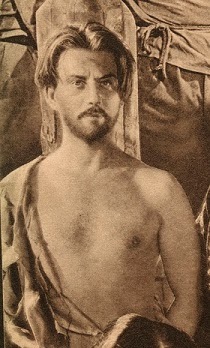 But the blinding doesn't work, and Michael and Nadia escape and continue on to Irkutsk to save the day.  Then they are married. The end.

But there is also a gay-subtext couple, French and English reporters Alcide Jolivet and Harry Blount (played by Donatello Castallaneta and Christian Marin in the 1970 version), who accompany Michael on his journey.

They meet as jealous rivals for the same "scoop," but then they must work together.  They help Michael fight off a giant bear.  Harry is shot, and Alcide tends to him.  They are captured by the Tartars, and escape together. 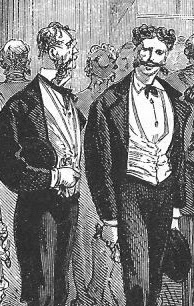 At the end of the novel, they attend Michael and Nadia's wedding, with an exchange that sounds very much like a marriage proposal:

"And doesn't it make you wish to imitate them?" asked Alcide of his friend.

"My cousin isn't to be married!" answered Alcide, laughing.

"So much the better," returned Blount, "for they speak of difficulties arising between London and Pekin. Have you no wish to go and see what is going on there?"

"By Jove, my dear Blount!" exclaimed Alcide Jolivet, "I was just going to make the same proposal to you."

And that was how the two inseparables set off for China.