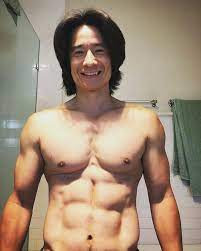 An animated supernatural crime drama set in the Philippines?   I'm there!  Who cares if it's called Trese, which evokes long girlish tresses, or if it the icon shows a heavily made up girl  -- I'll be able to hear people speaking Tagalog.  Besides, one of the voice actors is the uber-hunk Matt Yang King.

Scene 1: Naturalistic animation of a big city, night.  Suddenly a train breaks down.  The passengers exit, including three young women, who complain that this is the third breakdown this month.  They see an eerie dark figure on the track ahead, then a pack of growling, pointy-eared zombies.  They scream.  Darn, I thought the ladies were going to be kick-ass heroes.  They're victims.

Scene 2: Establishing shot of Manila.  Alexandra tells us that, although it's a beautiful city, at night there are monsters: "kidnappers and thieves are the least of your worries."  We see some of the winged monsters, fangs dripping blood. "Dark forces are getting stronger.  There is no light to keep the darkness in check."  Sounds like Gotham City.

Scene 3:  Alexandra Trese, the hunky Captain Guerero (Matt Yang King in English),  and the eyeglassed Lt. Tapio arrive at a crime scene.  The White Lady of Balette Drive, a famous ghost, has been murdered.  Wait -- how do you murder a ghost?  And why would you want to?   Suddenly the ghost springs back to life, vomits white light, and explodes.

Flashback to the child Alexandra examining a dead bird.  Her Mom tells her that death is nothing to be afraid of; it just leads to another plane of existence.  While drawing magical symbols, Mom continues: "Our family has always been a link between worlds. Your father is the lakan, protector of the accords, and we are babaylan, assigned to help lost souls find their way to the afterlife."  The bird's ghost flies away.

Back to the crime scene: only a few stray bits of ectoplasm are left.  Alexandra collects some to study.

Scene 4:  To find out who has enough magic to kill a ghost, Alexandra summons an earth monster that looks like the Thing from The Fantastic Four, who leads her to a green goblin named Nuno.  He tells her that "the dizzy dame" was trying to join the answan gang -- in order to join, you have to sacrifice someone.  But she ended up becoming someone else's sacrifice instead.  Wow, a whole afterlife underworld.

After examining the ectoplasm, Nuno states that the ghost was killed with a ghost-poison made from ground mermaid bones.  The murderer must have gotten it from the aswang gang that controls the pier.

Scene 5:  Alexandra bursts into a slaughterhouse where aswang (pointy-eared vampire things) are processing human carcasses.  She bursts into the office, where clan chief Ibwa is examining human offal, and points out that, according to the treaty the aswang signed with her father, he must cooperate with her investigation.  He disagrees, and sends in his goons.  Alexandra dispatches them.  He still refuses to tell her who he sold the ground mermaid bones to, so she cuts out his eye. 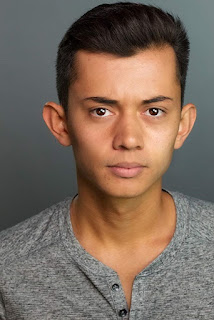 Scene 6:  Alexandra driving with her "boys": pale men with blank eyes, wearing suits (The Kambal, voiced in English by Griffin Puatu).  She dunks the eye in a glass of water and utters an incantation.

Flashback to Mom summoning the Great Spirit of the Binondo Fire.  Alexandra is scared, but Mom reassures her: "His face is scary, but he's not a monster."  Uh-oh, Dad calls, and is cut off amid scary music.  A startled Mom tells Alexandra that she has to run and hide. Hey, what happened to the Great Spirit?

Back to the car.  Captain Guerero calls and tells her to get over here, pronto.  Hey, I thought the eye was going to give her a clue. 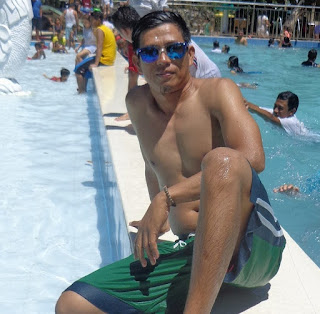 Scene 7:  A subway platform.  The Mayor (Rene Tandoc in Filipino) being interviewed by a flurry of reporters: "Crimes like this cannot wait for due process.  I promise to find and punish the guilty party myself!"  (Um...that's a tad fascist).  "This is why the people elected me."  (No, they didn't!  You're executive branch, and criminal justice is judicial!).  Captain Guerero, Alexandra, and the Boys stand on the sidelines.  She shows the Captain a handkerchief with the information the eye provided:  The Mayor shaking hands with an aswang!

More intel: in life the ghost was Gina Santos, the Mayor's mistress.  She died in 1995 -- it was officially a suicide, but everyone knows that the Mayor had her murdered.  And now he has killed her ghost in order to gain the favor of the aswang.

The Captain cautions Alexandra to not rile the Mayor: he can make people disappear.  But she approaches anyway, and accuses him of killing Gina Santos -- twice!  He scoffs. "You have no proof, and anyway the aswang don't even exist."

Scene 8: Finally they can investigate the crime scene: a subway car, lots of blood but no bodies.  The aswang gang must have been processing the bodies of the passengers they attacked in Scene 1.  But why was there blood inside the subway car?  They all exited.

Alexandra summons a fiery presence, the Great Santelmo, and asks him to investigate.  He says that the souls of the dead people are still in the car, plus three girls who don't belong, and some people who died in a fire.

When he leaves, Alexandra performs an incantation, and sees the ghosts standing in the car.  Plus an emissary of Ibu, the Goddess of Death, who tells her that she's ferrying their souls to the Underworld.  Alexandra asks about the three girls who don't belong:  they didn't die on the train; they were captured by the aswang and taken back to their lair to be killed.

Alexandra: "Can you show me where they were killed?"  Emissary: "Sure.  Just let me vomit some moths."  Is this another plotline?  What does it have to do with the ghost's murder?

Scene 9: Alexandra and her Boys follow the moths to a cheesy Chinese Restaurant and Hotel.  A big bloody room, some girls in cages, another tied up and about to be sacrified.  Apparently they kill some humans for food, but the special ones --  I guess the ones who are cute girls -- get their souls removed.  Cute-girl souls are worth more than cute-girl meat.

Just as Alexandra starts to dispatch the evil aswang, the Big Bad Xa-Mul arrives with about 300 hench-demons.  "The accords don't apply in this situation.  The humans were a payment, so we can eat their souls if we want."    Alexandra disagrees, so the hench-demons attack.  She dispatches them, with a little help from a deus-ex-machina: two guys wearing smiling face masks, whose guns shoot rays of purple light.  One, whose name is Crispin, quips: "Couldn't let you have all the fun, could we?  Oh, and we freed all the girls in the cages." Are they her Boys? 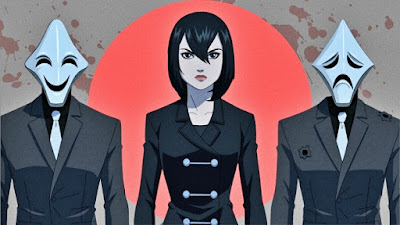 Scene 10: Aftermath, with ambulances and "Thank you for saving my daughter!"  And an explanation of the fire plotline: The Mayor wanted them to leave their apartment so he could build a condo, but they refused, so he set the place on fire.  Many died.  He took the survivors to the cheesy Chinese Restaurant and Hotel, where the aswang captured them and kept them in cages.  "And we weren't the only ones."  Oh, hell, no, not another plotline!  "The Mayor has been crashing trains and burning down buildings all over the city to provide them with humans to eat."

Captain Guerero: "Great!  Now we have enough evidence to arrest the Mayor for human trafficking and arson."

But Alexandra is sad: "There are monsters among us, and some of them are human."

Scene 11: Alexandra and her Boys arrive at the Diabolica Club.  The bartender, Hank, pours her the usual, while the tv news tells us about the Mayor being arrested.

The Captain calls. "Get over here, now!"  The end.

Questions: What mistake did the God of Death make?  Why were the three girls on the subway special?  If the aswang are eating the humans on the spot, what's with the warehouse where they are processing human carcasses?  And why are they trying to extract souls, too?  And why did the Mayor kill Gina's ghost?  He didn't need to appease the aswang, as he was already supplying them with lots of humans.

Gay Characters:  No one expresses any heterosexual interest.  Apparently one of the dead people is a Gay Man in Drag, but I didn't notice. Lead actress Liza Soberano has a history of homophobic comments, so I doubt that she would take the role if Trese was gay or bi.