Love and Monsters: It's a Beatiful Day in the Neighborhood, Except for the Monsters 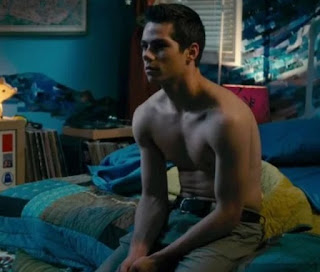 "In a post-Apocalyptic world, a boy travels across a monster-infested wilderness to reunite with his girlfriend." Heteronormative garbage!  Why did Bob order it for Netflix movie.  Besides, we've both been vaccinated.  We can leave the house.  Why even have a movie night?

Seven years ago, a giant asteroid threatened to destroy the Earth, so we sent missiles to break it up.  But 16-year old Joel and his girlfriend Aimee were too busy smooching and contemplating sex to pay attention.  Then chemicals in the missiles rained down, not hurting mammals or the environment but instantly transforming many cold-blooded creatures into gigantic carnivorous monsters.  Joel and Aimee rushed home, where their parents were rushing to evacuate the city -- Fairfield, California, near Sacramento, was "ground zero."

Seven years have passed, but Joel is still a teenager, living in an underground bunker.  All of his bunker-mates have paired off, leaving him without a romantic partner (they are introduced so quickly that I can't tell if any are gay, but in the last scene two women are sort of hugging).  He is also frustrated because he has been assigned the "worthless" jobs of cook and communications officer, while the others get glamorous jobs like supply run and bunker defense.

Suddenly Aimee's voice appears on the radio -- she's living in a colony 85 miles away (about a week's journey) -- so Joel decides to drop by and pick things up where they left off.  Joel's bunkmates object -- he's never left the bunker, he doesn't know how to fight monsters, and besides, he's sort of a coward.  Besides, seven years have passed, and the world has ended -- how does he know that Aimee has just been sitting by the radio, waiting for him?  Joel dismisses their objects.  With inadequate supplies and a hastily-scrawled map, he's off.

Fortunately, the outside isn't as bad as everyone says.  It's bright and sunny, there are no corpses, food is plentiful, and the 1950s sci-fi monsters, although big and scary, are not numerous - and some are friendly.

This is not a Walking Dead world full of Negans waiting to steal your stuff and shoot you -- the sentients Joel meets are all exceptionally helpful.  A dog named Boy drags him away from danger, a robot named Mavys shows him photos of his dead mother, and clones of Tallahassee and Wichita from Zombieland give him survival tips: "you can get a hot meal or a good night's sleep, but never both." 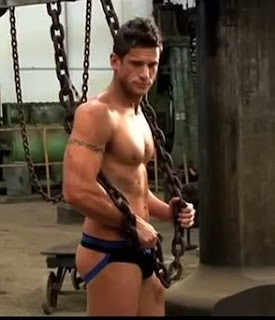 Aimee is in charge in a seaside commune full of elderly hippies.  She didn't realize that Joel was coming, or that he'd want to pick things up -- turns out that she moved on with her life and dated someone else, whom she lost last year (no, it's a guy).  No sex, sorry!

The whole commune is packing to join the bigger-than-life Australian sailor Cap (Dan Ewing), who lives on a yacht towed by a giant crab.

Wait -- why would Cap want to bring a lot of people who are too old to work, and require constant care, to come aboard his yacht?  And why would they want to go?  Aimee says something about the commune being "unsafe," but it looks fairly well fortified.

Joel immediately resents Cap as competition -- he's goodlooking, muscular, charismatic, he has a sexy Australian accent, and he makes his own beer!

Turns out that it's a plot complication to push Aimee and Joel back together -- Cap is planning to poison everyone in the commune so he can steal their supplies.  How about just threating to shoot them?  With his newly developed survival knowledge, Joel wins the girl and saves the day -- the newbie is a much better fighter than the girl who's been in charge of a survival commune for years.

Then Joel realizes that he misses his bunkmates back home, and leaves.  So he came all this way to reunite with his girlfriend, and leaves after one kiss?  I'd stick around for the sex, at least.

In the end Joel becomes the leader of the "leaving your bunker" movement, convincing colonies all over the West Coast that the outside isn't as bad as they thought. Humans can move out into the daylight and reclaim the world.   But they go outside for supply runs all the time -- wouldn't they know how bad it is? 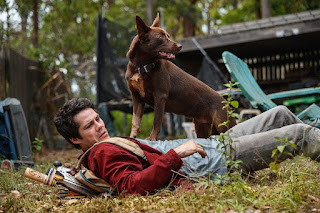 This movie has an infectious optimism, a belief in the innate goodness of humanity that serves as a remedy for the incessant gloom-and-doom of the Walking Dead franchise. The monsters are beautifully drawn retro 1950s -- the  human-giant crab battle comes directly from Mysterious Island  (1961).  And no one dies!

You can almost forgive the ridiculousness of the premise.