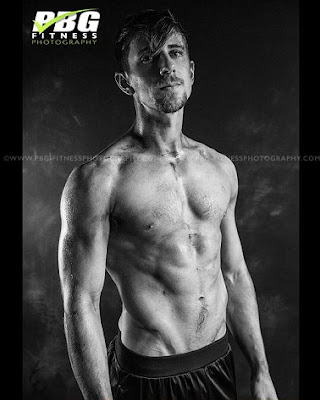 Drowning in Sunshine: "a profanity laced, indie, brutal, chirpy, fun, and weird story" about a woman named Lucky who is shot in Miami and washes up on the shore at Brighton.  She meets Jack and David, and....

On the off chance that Jack and David are a gay couple, I watch Episode 4: David is "kidnapped," and Lucky and Jack must go on an "epic quest" to rescue him.

The opening credits are animated: Lucky falling off a boat, while the evil Black {Alexander Huetson, left) looks on. Candy and Cameron look sinister outside a mansion.  Lucky shoots a gun, which changes intoa squirt gun on the beach, aimed at Jack and the belching, beer-guzzling David. Meanwhile Sophie looks annoyed while Jeremy plays with a sword.

Nice to have all the character and actor names spelled out.  Unfortunately, most of them have no other credits on IMDB, and are very hard to find.  No Cameron (Sergio Carbello) anywhere. 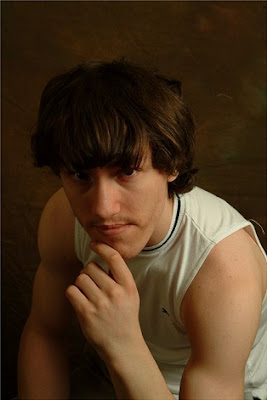 Scene 1: Stephanie, who has a pony tail and leather gloves, is on a couch, furiously texting while Jeremy plays video games. He seems to be autistic, and has a hairlip, but he's still cute.  I'd date him.

I looked up the actor, Steve Wallace: very impressive talent agency page, lots of paid and unpaid jobs, testimonials about how nice he is. It hasn't been updated since 2014.

Vera drops by to snarf at Stephanie for not getting work.  She is apparently a paid assassin, but unemployable after some disgrace. 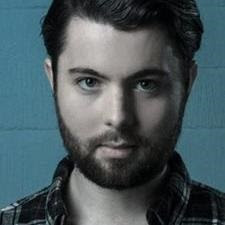 Scene 3: Flashback to Miami, where Lucky and her friend are discussing Mr. Black, who wants to kill her.  Detective Rodriguez, FBI interrogates her on the party last night, where she shot a drug lord.  He wants her help in tracking down Alvarez, but she refuses.

Rodriguez is rather hot, too.

Scene 4:  Back at the apartment, Lucky discovers a ransom note: David has been kidnapped!  But it's ok: Jack points out that the note is humorous; their "bad ass and super cool best friend David has been kidnapped by an evil wizard." They must figure out the clues to rescue him.  Apparently this is a role-playing game you can arrange at Brighton.

Scene 5: Back on the couch, Sophie is ruminating over her failure in the paid assassin business.  Jeremy -- her brother -- suggests video games to take her mind off it.

I get it -- this show juxtaposes real brutality with the whimsy of Brighton. 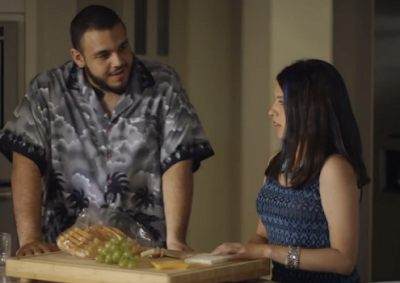 Scene 6:  The riddle on the back of the "ransom note" leads Lucky and Jack to the Pavilion.

Flashback to Miami, where Suit Guy tells Cameron that the paper trail is too long, he can't hide all of his illegal assets.  They decide to transfer everything to someone else, who will then take the fall.

Lucky tells Cameron that she doesn't like Black hanging around.  He offers to kill him, as a favor.  Lucky hints that she might want to find another job.  Cameron gets irate: "I didn't hire you to be my cook, I hired you because you're the only one I can trust!"

.Scene 7:  Lucky and Jack arrive at the Pavilion, a faux Arabian Nights palace with a "cheap Chinese restaurant inside."  A pirate asks them a riddle: "the poor have it, the rich need it, and if you eat it, you'll die." (Answers at the end)

Scene 8:  Sophie loses the video-game battle. She complains that it's all nonsense; she knows how to kill people in real life.  Jeremy wants to learn real-life killing techniques, so she brings out her weapons. He touches a stun-gun dart and collapses.

Immensely cute, and a basket!

Scene 9:  Lucky and Jack go to the Pier (nice location shot) to get the next clue from the giggly Green Fairy. Her riddle: "I am the beginning of eternity, and the end of time and space. I am essential to creation, and surround every place." They are under surveillance from an out-of-place narc, who thinks something nefarious is going on and warns his superior.

Flashback to Miami, where Black has brought Lucky along on a hit.

Flashback to Miami: Black beats up the hit, Leon,then asks Lucky to finish him off.  When she refuses, he puts his arms around her until the gun goes off. 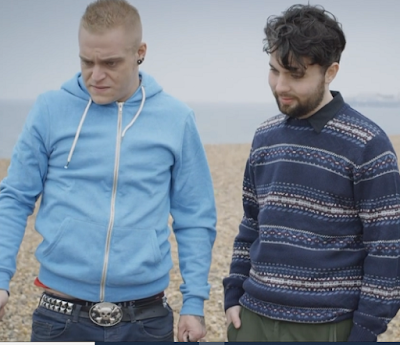 Scene 11:  On the beach, they rescue David from an evil wizard: "If only I hadeth a friend as badass and bitchin as thee!  Thou friends should stop blowing thee off when they do cooleth things!"

They go home, where Jack puts the ransom note in a drawer with the others.  Evidently David plays this game a lot.  I get the impression that he's a little needy.

Beefcake:  No body shots, but lots of cute guys, and a couple of bulges.

Gay Charactess:  No one specified.  Jack and Lucky aren't dating, so maybe he is gay.  David is a scally dude, probably not.

Heterosexism:  No one expresses any heterosexual interest.

The Descent into Traumatizing, oul-Destroying Horror:

After the break.  I suggest you stop here.  I would give a lot to be able to turn back time and never watch the last episode.


I watched the last episode to see if Jack turns out to be gay.  Cameron captures Lucky and Jack, while David rushes to the rescue.  Then...then....then...

They are murdered.  They both die.

What kind of evil, sadistic monster gives you lighthearted comedy for six episodes, and in the seventh has the main characters killed?

I have to go write a dozen 1-star reviews of this abomiantion.