"Louder Milk": Sobriety Can Be Funny, Sort of. 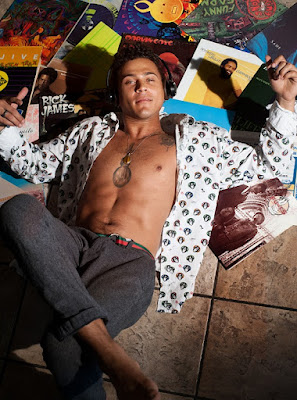 Amazon Prime has pushed a tv series called Louder Milk at me.  Curious about how milk can be loud, I checked out the promo:  It's actually one word, the name of focus character Sam Loudermilk (why?), a substance abuse counselor "with an extremely bad attitude."  Sam is played by American actor Ron Livingston.

Wait -- it's not British?  But only Britcoms feature jerks.  In America, they may be grumpy and even bigoted, but they always have a heart of gold, under the theory that you wouldn't want to invite a disagreeable person into your home every week for several years.

Nope, it's American, actually set in Seattle.  And rather obsessed with boy-girl stuff, according to the episode synopses.  In the first season, Sam lets a young addict named Claire stay on his couch, plus starts a romance with Allison.  Plus boy-boy stuff appears to be abusive: group member Tom (who, in his late 50s, hardly qualifies as the "new kid in town" in the episode title) gets a sponsor named Cutter, who "makes his life a living hell."

LGBT people have higher rates of substance abuse than the heterosexual population, due to the stress of living in a homophobic society; generally they have their own support groups to avoid harassment from homophobic members, but maybe the tv series has some gay characters. I reviewed the Season 2 episode "Iron Man," in which "Claire learns a secret."  Secrets on tv are usually about someone being gay.

Previously:  Claire's mother and a priest telling Loudermilk that she is a "good girl," interspliced with scenes of her working as a stripper (yuck!).  Then the group is annoyed with her because she talks too much: "We've heard this story a hundred times.  Your Mom was cheating on your Dad, back when you were still a lesbian."  So Claire was gay, but then got cured?  That's way retro-homophobia. 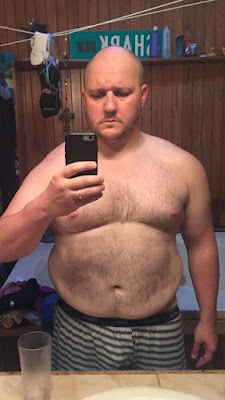 Scene 1:  Loudermilk tags along while Claire shops for shoes before their sobriety meeting.  He flirts with the blond woman sitting next to him (why isn't she trying on shoes?), but is turned off when she starts bteastfeeding her ten-year old son.

Scene 2; Back home, Ben (Will Sasso, left) and Claire or a lookalike (every woman on this show is blonde!)  wonder why Loudermilk is making groaning noises.  Is he getting laid?  No, he hurt his back lifting weights (very light dumbbells).

Scene 3: At the coffee shop/record store, a song about Lois Lane plays, and Claire the ex-lesbian criticizes 1990s grunge music with her long-haired coworker.  Loudermilk hobbles in (still injured) and orders a coffee.

A male-female couple comes in, and Claire shrieks and hides.  They see her anyway, so she is forced to be polite: "Hello, Mr. and Mrs. Enderby."  They offer condolences about her Dad; they miss seeing her parents at the club. So Claire's family is rich.  Figures.

She claims to be the manager of the coffee shop/record store, but the boss blows her cover by ordering her to take care of a toilet emergency! Why do dead-end jobs on tv always involve cleaning toilets?  I'd rather clean toilets than go back to some of the "better" jobs I've had.

Later Claire tells Loudermilk that Mr. Endersby is the one Mom was having an affair with, back when she was a lesbian.

Scene 4: A Catholic church.  The sobriety group is meeting. Not a lot of beefcake here: the guys are all rather unattractive, except maybe for Cisco (Tyler Layton-Olson, top photo).  And apparently heterosexual, as they are discussing hockey and women's breasts.  A woman named Brooke comes in and wants to join.  Loudermilk says it's a men-only meeting.  But what about Claire?  "Oh, she's a guy."  So gay men are "girls," and lesbians are "boys"?  But you forgot that Claire isn't a lesbian anymore.

Loudermilk lets her join anyway.  Her story: she been sober for three years, she's run a suber-living group for the last two years, and she owns a chain of "wellness franchises."  They specialize in Eastern medicine, but also do chiropractic.  Isn't she a little advanced for this group?  She also lost her husband due to her alcoholism.  Of course, it's heterosexuals all the way down.

Next up: Claire.  The night her dad died, she was at a sorority party and missed his final phone call.  If she hadn't been drinking and talked to him, maybe he wouldn't have....

Scene 5: The meeting is over. Loudermilk is putting away chairs, when he collapses due to back pain.  Brooke rushes over to help, but he rebuffs her.  I thought for sure they would start dating. Father Michael, the priest at the church where the group meets, summons Claire to his office...

Where her estranged Mom is waiting!  With news: she's going to sell the house: it's too big, and she can't take care of it all by herself.  This upsets Claire.  Why would she care?  She hasn't lived there in years.  She has to come and pick up her things.  "Hell, no, growl, growl, growl."

Scene 6:  Claire helps the injured Loudermilk into the house.  She then goes to her room, sketches a picture of her father, and looks up the University of Washington website.  How are these activities connected?  I don't know, but doubtless a regular viewere would.

Scene 7: Morning. Loudermilk on the floor in the kitchen.  Claire convinces him to call Brooke the Wellness Expert.  Then she bikes over to the opulent mansion, hoping to get her stuff while Mom is out.  Why would Mom need to take care of the mansion by herself?  Surely she has an army of housekeepers and gardeners to do it.  Mom comes in and asks why Claire hates her so much: "Dad killed himself when he discovered that you were fucking Mr. Endersby."

But that's not it at all.  Mom reveals that Dad was having an affair with Mrs. Endersby!  And his suicide had nothing to do with the affair: his company was going under, so he was bankrupt.

So now Claire hates Dad, not Mom.  Rather a judgemental type, isn't she?

Scene 8:  Claire leaves.  Biking through town, she runs into her old dealer, who says "we've missed you" and asks if he can get her anything: "my treat."  She looks torn.

Meanwhile, Brooke the Wellness Expert is doing chiropractic on Loudermilk.  She cures him; they flirt.  Ok, so the dating is happening.

Scene 9:  On her way to the sobriety meeting, Claire sees Brooke and Loudermilk outside the church. She grins,  delighted that he's dating someone.

In the meeting, they all complain about Cisco getting a job as a bartender. Ever see "Cheers"?   Then Claire shares that she got into substance abuse due to guilt over her father's death.  She understands now that she had nothing to do with it, but she's still stuck.  She is unable to move on.  Well, it's only been a couple of hours...

Scene 10: Claire at home, going through the box of stuff she brought back from Mom's house: pictures, an old record album, a snow globe.  Loudermilk comes in and sees the University of Washington website on her laptop.  "I got in," she announces.  I guess she still has a trust fund to pay for it.

Heterosexism: To be a man is to be interested in women, as we see from the group meeting.  Loudermilk does a little flirting. 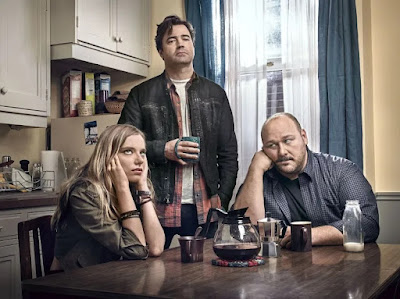 Gay Characters: Only Claire the ex-lesbian, and she doesn't express any romantic interest.

The "ex-lesbian" thing comes only from one line in the prologue.  Googling Claire always has her identified as gay or bisexual.

Disagreeable:  True to American sitcom tradition, Loudermilk is grumpy but has a heart of gold.

Comedy: This is not a comedy, it's a drama with jokes.  Granted, the jokes are witty, although usually a bit vulgar.