"Boss Baby: Back in the Crib": Is Boss Baby Gay? 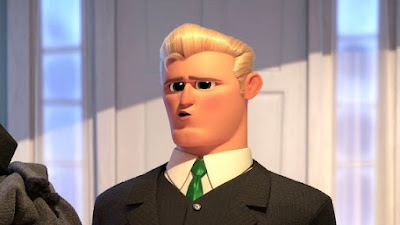 Boss Baby started as a children's book, then became two movies (2017, 2021) and a tv series (2018) about a secret baby-run corporation (the babies actually behave more like secret agents than business people).  In spite of the Hollywood mandate that every boy, regardless of age, meet the Girl of His Dreams, Boss Baby displays no heterosexual interest.  In the 2021 movie, he's all grown up; his older brother Tim has a wife and kids; but Boss Baby (aka Ted) never mentions a wife or girlfriend (at least, none are mentioned in the wikipedia profile).
Now, on Netflix tv, Boss Baby is Back in the Crib, grown-up but reverting to a baby again. The promo is not promising:  he has a female counterpart, no doubt a girlfriend.  Has he finally given in to the heterosexist mandate?  To find out, I reviewed Episode 1.

Scene 1: The adult Boss Baby, real name Ted (JP Karliak), the CEO of an adult-run corporation, suddenly discovers that FBI wants to arrest him for embezzlement.  He calls around to see which of his employees is the real culprit.  Jaron?  "Yes, but I can't go to jail.  I have a wife and five kids."  Ted; "I respect your weird choices."  A guy married to a woman?  How bizarre!

Bradley?  "All we did was take corporate money to buy stuff we wanted.  We didn't want to go to jail, so we framed you.  Is that cool?"

Ted runs.  There's no place to hide -- or is there/  He has a formula that turns adults into babies for 48 hours! 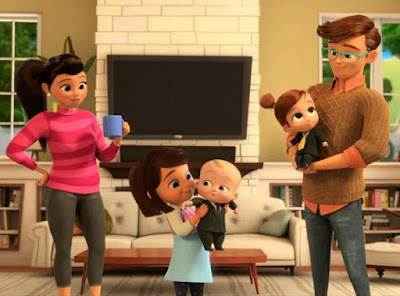 Scene 2:  Now a baby, Ted approaches his grown-up brother, Tim (Max Mittelman), and his kids (baby Tina, preteen girl Tabitha), asking for a place to hide out for a few years (why doesn't he name his employees, who have all confessed?).

He also needs a job at Baby Corp, so he can get more formula and stay a baby.   Tim is hesitant; his wife is not aware that babies can talk, and finding out usually scrambles adult brains.

Scene 3: Baby Ted gradually tells Tim's wife his secret, in spite of the brain-damage danger.  Bottom line: "I'm either a baby here, or a grown-up in jail."

Scene 4:  Baby Ted and his baby niece Tina (not a girlfriend, sigh of relief) head to Baby Corp, where he's a legend.  Lots of hand-shaking.  He hugs Amal (Kevin Michael Richardson), an old co-worker. (Wait -- why didn't his co-workers from 30 years ago grow up?).

Back when he was CEO, Ted tried to increase the love for all babies, but new CEO Nannycam is only interested in the top 5%, the cutest babies.  Especially the Ultra-Baby Omega (UBO), whose cuteness level is actually toxic: after about eight seconds, you run away screaming.  Only authorized personnel are allowed to see her.  Reminds me of the Star Trek episode with an alien who drives anyone who sees it mad.  Is it too ugly, or too beautiful?

CEO Nannycam refuses to give Baby Ted a job, since he's actually an adult.  To win her over, Niece Tina, the head of field operations, invites him along on a mission. 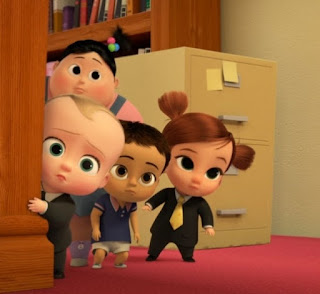 Scene 5: A rogue cheek-pincher has invaded a library, producing grumpy, fussing babies and thereby reducing baby love.  Tina and her team, try various strategies to stop her, but fail.

One of the operatives, Pip (Karan Soni), appears to be non-binary: both pink and blue in their jumper, never referred to with a pronoun.

Ted goes home and asks his pre-teen niece, Tabitha, to help him get Tina demoted, so he can take her job.   She's a computer expert, and offers to hack into the Babycorp system. He's going to sabotage his own niece?

Scene 6: Back at the library, Baby Ted tricks the Cheek-Pincher into seeing the Ultra-Baby Omega on a nanny cam.  She runs away screaming.  Now the CEO will think that Tina hacked into their system, and demote her!  An eerie parallel to Ted's staff framing him.

Scene 7:  Baby Ted has a change of heart, and takes responsibility (naturally).  The CEO is so impressed that she makes him Co-Vice President of Field Operations -- he'll be Tina's partner.  But she's his niece, so there still won't be any heterosexual subtexts.?

"Now go home and make time for what matters -- family."  Ugh, I hate the "heterosexual nuclear family is everything" rhetoric. 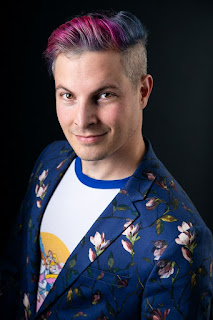 Is Boss Baby Gay?  Obviously for  plot logistics, the adult Ted can't have kids of his own, or he'd be adventuring with his own daughter.  Only the avuncular relationship will work.  But he could easily have mentioned a girlfriend.  He doesn't.

When Ted becomes a baby, baby interests kick in, so he could conceivably meet a potential partner at Baby Corps.  But he doesn't seem interested in the female CEO or the female members of the field team.  And what are we to make his statement that his employee's wife and kids are the result of "weird choices"?

The voice actor, John Paul Karliak, has purple hair, a queer identity, and a twitter account full of fundraisers for trans youth.  That doesn't mean that his character is canonically gay: he's also voiced Wile E. Coyote.   Wait -- Wile E. Coyote was obsessed with "eating" the Road Runner, a boy....

Update:  When Ted remembers all of the birthdays he celebrated as an adult, he goes out to dinner and an improv club with his two "best friends," a man and a woman.  I think he's canonically aromantic/asexual.