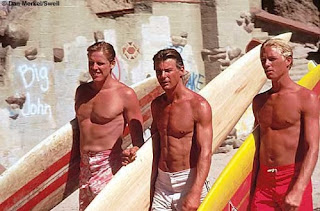 Beach scenes in most movies involve slow-motion close-ups of bikini-clad women,  with an occasional guy in the distance, but Big Wednesday lingers over shots of glistening male bodies so tight that you can see the veins running across biceps and count the vertebrae on backsides.  Even scenes set far from the beach are populated chiefly by gorgeous muscleboys.

The trio shares a quiet, subdued homoerotic bond from the first moments, when they awaken on the beach in 1962, wrapped in each other’s arms under blankets, then surf “the morning glass” on a single board.  But Leroy goes even farther, eschewing the girl-grabbing that most buddy movies emphasize to “prove” that the protagonists are all heterosexual.  When they invade the Star Burger Café (still shirtless) and flirt with a pretty waitress, Leroy pointedly ignores her, horsing around with Matt instead.  Later, at a party, dozens of (still shirtless) muscleboys locate girls to grab and kiss, with the exception of Leroy – he’s in the kitchen, half naked, being oiled up by some male friends (to facilitate sexual congress, I presume). 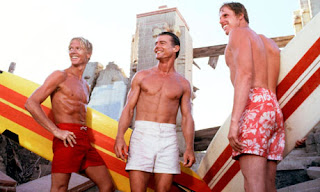 When Matt and Jack get girlfriends, they all head down to Acapulco, and Leroy remains a “fifth wheel” who doesn’t even flirt with the local girls.
Years pass, and the water grows cold.  Matt battles the bottle, Jack goes to Vietnam, and Bear (Sam Rockwell), the South of Market leatherman who runs the beach surf shop, becomes a wealthy surfboard magnate.  All of them (except Leroy) abandon the homoerotic paradise of surfing for marriage.  Yet at Bear’s wedding, he proposes a toast:
Jack: What are we drinking to?
Bear: Only to your friends.  To your friends, come hell or high water.

It is an odd toast for an occasion that usually marks the end or severe circumscription of same-sex friendships in favor of heterosexual bondng, and striking when one notes that Bear’s fiancee appears only in that scene.  It is as if he married simply to celebrate his love of his friends, “the most important thing you got.”

The trio concurs.  Heterosexual practice comes and goes; there are flirtations, sexual interludes, marriages, and divorces (except for Leroy, whose romantic interests are never specified).  But their most important, most permanent bonds are with each other.

In 1974, at the end of the movie, they gather for another “Big Wednesday” at the beach, and the camera lingers again (for a full ten minutes) on their bodies glistening and straining under the bright summer sun. 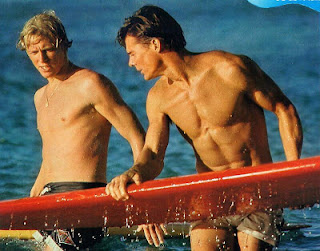 We don’t have to look far for clues about how the possibility of same-sex desire became so overt into this plot-riddled extension of Endless Summer (1966): director John Milius, a surfer in his own right and sometime workout buddy of Arnold Schwartzeneggar, specialized in the bonding of brawny, heavily-muscled buddies in Conan the Barbarian (1982), Red Dawn (1984), and Flight of the Intruder (1991), and here he cast three goldenboys who would play much the same roles throughout their careers.  Jan-Michael Vincent plays troubled, aging muscleboys. Gary Busey has played soldiers, villains, lunatics, rock stars, and heavily-muscled regular guys, pairing with Willie Nelson in Barbarosa (1982), gay-friendly Corey Haim in Silver Bullet (1985), and Fred Williamson in South Beach (1992), but he is almost always a lost soul aching for love.