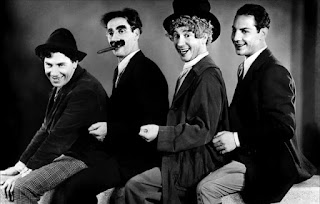 I first saw the Marx Brothers at a Film Festival during the Summer of 1978 (along with Animal House, Grease, and The Rocky Horror Picture Show: it was a memorable summer).  The anarchic comedians came from Vaudeville, moved onto Broadway, and started spinning their bits into movie comedy with Cocoanuts (1929).  Three of the greatest comedies of all time followed: Animal Crackers (1930), Monkey Business (1931), and Horse Feathers (1933).  Then they made some movies that were merely great.

Zeppo, the youngest, played the "handsome leading man" for a treacly romantic plot. 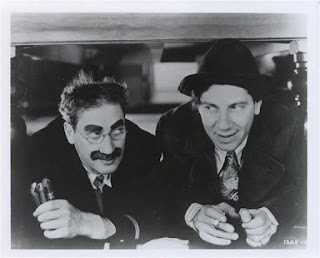 Chico (right)  played an Italian-accented musical virtuoso planning cons of his own.

Harpo played his mute, addled sidekick, who liked to chase women while honking a horn. He also handed  random people his leg.

Not at all. You can queer a Marx Brothers movie as easily as Making Love.

1.  You don't expect a lot of beefcake in movies from the 1930s, but there was some. Mostly from incidental players. 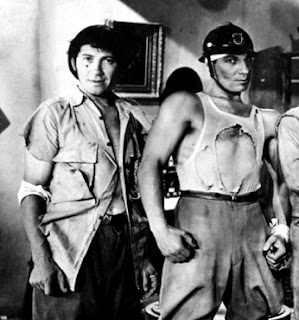 In this still from Duck Soup, Zeppo looks pleasantly muscular for the 1930s, and Chico positively buffed.

2. In the heart of the Pansy Craze, there are no pansy jokes  No screaming queens, no effeminate waiters, none of the overt homophobia evident in other movie comedies of the era.

3. Zeppo's hetero-romance is ludicrously over-the-top; it is one of the social institutions that the Marx Brothers are mocking.

Harpo hands his leg to women and men both.

All of the Marx Brothers demonstrate an easygoing nonchalance about same-sex desire that is remarkable for the period. 4. In real life, Groucho stated that he was "straight but curved around the edges."

My friend Randall claimed to have been with him at a party in Hollywood in 1958.


Near the end of his life, the 80-year old Groucho fell in love with 30-year old Bud Cort -- who starred in Harold and Maude (1971), about a romance between a teenage boy and an elderly woman.  Bud moved into Groucho's mansion, where the question of whether they became physically intimate is nobody else's business.  "I loved him, and he loved me.  He was my fairy godfather."