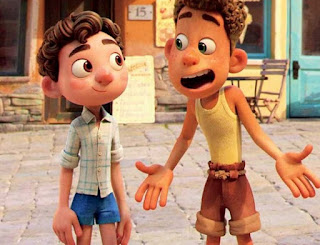 In the new Disney/Pixar Luca, teenage sea monster Luca (Jacob Tremblay) lives beneath the sea in Italy.  He is forbidden from going above the surface, because the humans who live there are savage monsters, killing and eating the sea creatures. One day he goes Above anyway, and magically turns into a human  (sea monsters always appear as human on land, but revert back when they go underwater, or get wet).
He meets Alberto (Jack Dylan Grazer), a sea monster living as human in a ruined tower.  They quickly become boyfriends.  Montage of them trying on clothes, dancing, working on a Vespa, arms around each other watching the sunset.

I'm starting to think that they're canonically gay.  As they lie on the ground, talking about their dream of owning a Vespa, Luca says "I never would have experienced any of this without you."  I swear that they're about to kiss.

By the way, Jack Dylan Grazer is playing a gay kid in the the HBO series We Are Who We Are.

Meanwhile life under the sea becomes increasingly repressive; Luca's parents are going to send him away to the Deep, so he won't be able to see Alberto anymore.  Alberto suggests that they hit the road together: they'll go to the human town, track down the guy who builds Vespas, and ask him to build one for them (their knowledge of humans is rather limited).  Of course, they can't get wet, or the humans will discover their secret, and they'll be gutted and eaten. 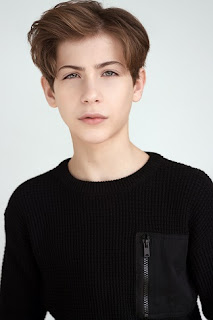 In the town,they encounter the bullying braggart Ercole, who has won the Portorosso Cup five years in a row, and a girl named Giulia, who intervenes when Ercole tries to push them into a fountain  (and reveal their secret). Uh-oh, I smell hetero-romance.  At least there's no slack-jawed gazing.  She tells them that kids "who are different" need to stick together.  Like to compete in the contest and win the prize -- Vespas!

She brings them home for dinner, where her Dad, the bulkitudinous Massimo  -- gulp -- is a fisherman: "I gut and cook anything that swims."  But Alberto cozies up to Massimo by offering to help out: "We know a lot of fish."

That night, in the moonlight, Massimo calls Alberto away, leaving Luca and Giulia alone.  He shoots back a worried look -- is Giulia going to make the moves on his boyfriend?

Not exactly.  They look through a telescope at the stars, and then Giulia shows him a lot of books about science and human culture ("The stars aren't fish?  Alberto was wrong!").

Alberto interrupts.  Glaring at Giulia, he drags Luca away.  "It's time to go...." 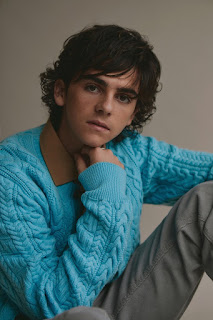 Luca is all excited about his new knowledge of stars and planets, but Alberto will have none of it: focus on the Vespa, and the two of us together forever....

"Giulia has a big telescope at school in Genoa.  We could visit her...."

"Why the heck would we want to do that?"

The bullies appear and start to beat up Alberto.  Luca rescues him. Whew, back to the romance.

While they're training, Giulia puts her hand on Luca's.  Alberto jealously pulls him away.  This will not end well for Alberto.

Later, Alberto tries to put his arm around Luca, but Luca pushes him away.  He doesn't want to go on the road anymore.  He wants to go to school.

They fight.  Giulia interrrupts.  Alberto snippily gets wet, so he appears as a sea monster.  Giulia screams; Luca pretends to be human, and afraid.  The bullies arrive and throw harpoons.  Betrayed, Alberto disappears into the ocean.

Covering didn't work: soon Giulia deduces that Luca is a sea monster, too!  "You have to leave, even though this is the happiest I've been since..."  Gulp, lo-oo-oove is in the air!  "Why did you come to a town where the main economy is killing sea monsters?"  Luca explains: "We did all of this to win the Vespa, so we could be together.  But that's all over now. Alberto is gone."

Well, not quite yet.  Luca finds Alberto in the ruind and apologizes for betraying him.  "Ok, you're sorry.  Whatever.  Just leave me alone."

He approaches, tries to hug Alberto, and is swatted away.  "Just leave me alone."  "Ok, I'll go win the race without you, and bring back the Vespa, and we can be together again." Um...Alberto has made it pretty clear that he doesn't want to date you anymore.

Luca enters the contest by himself.  He wears a diving outfit during the swim section to avoid outing himself, but then it starts raining during the bike race!  Alberto tries to distract everyone so Luca can still win, but it doesn't work.  They end up on the bike together, out as sea monsters, being chased by harpoon-wielding bullies.  Still, they manage to cross the finish line, and technically win the contest.  Except....here come dozens of harpoon-wielding townsfolk!

Bully: "No, but we're afraid of you!  Everyone is horrified and disgusted by you, because you are monsters!"  Lots of gay symbolism here!

Massimo: "They are not monsters.  They are Luca and Alberto." Wow, his homophobia faded away quickly.

Turns out that there have been sea monsters in the village all along, hiding among the humans.  Now they have the courage to come out of the closet.  Although, as Luca's Grandma says, "Some people will never accept Luca, but others will."

The boyfriends, now reconciled, have to decide if they're going to hit the road or go to school in Genoa.  School it is.

Wait -- only Luca is going to school.  Alberto is staying in the village with Massimo. Boo!  I don't care that they hug and cry, and Alberto says "We'll always be together...in our hearts."  They should both be at that school!

The homophobic director has explicitly stated that Alberto and Luca are heterosexual: they're too young to have sex, so obviously they can't have "turned gay" yet.  But non-homophobic fans aren't so sure..  You can have romantic feelings long before you have any interest in gettng physical.  Dennis the Menace is in love with Gina, at age five.

Deny it all you want.  Luca and Alberto are obviously, inntentionally portrayed as boyfriends, regardless of what the official party line says.  And in spite of the break-up at the end.