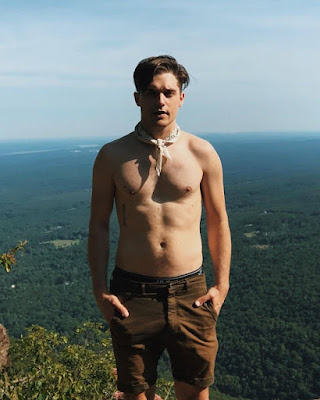 I knew that Dolly Parton was gay-positive, but I had no intention of  watching her Netflix series, Dolly Parton's Heartstrings: "Eight stories celebrating family, faith, love, and forgiveness," each inspired by a Dolly Parton song.  Sounds like Sunday morning services at the First Baptist Church, all set to country-western music.  I was shocked to discover that the episode "Two Doors Down"  won a GLAAD Award in 2020.  So let's take a look.  It might not be horrendous.

Intro: Dolly explains that when she wrote "Two Doors Down" in 1977, she was on the road a lot, away from her family, but she found a new family with her crew, which was composed of "all kinds of people: different colors, gay, lesbian, transgender, different faiths, but we all loved each other.  Love is love."  It goes on like that.

Scene 1: Singing "Two Doors Down," naturally, Ty (Broadway actor Andy Mientus) drives down country roads "to the place I belong" (sorry, wrong song). Switch to Mom Amelia busily micro-managing his sister Lee's upcoming wedding, and wondering why she looks so miserable. Could it be...Mom butting in? 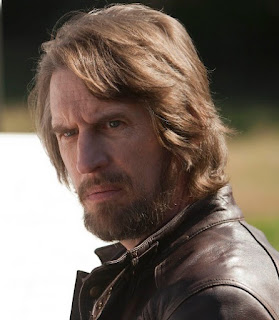 Scene 2: They all arrive at the elegant hotel.  I thought they would be hillbillies, but Mom is loaded!  Mom tells Ty that he's sure to get a lot of attention from the ladies at the wedding, because she's given "her gay" his clothing sizes: "that's the one thing gays are good for, right?  Fashion!"

Estranged Dad Roy (Ray McKinnon) arrives.  Now that's a hillbilly!  He looks like he just finished huntin' possums with Jed Clampett (there actually is a dead deer in the back of his truck). 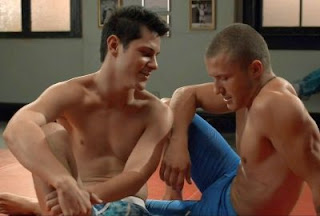 Scene 3: Ty discusses his secret with his boyfriend, the uber-swishy Cole (Michael J. Willett): "As you know, Dear, I'm not out to my family, due to Mom's homophobia.  When marriage equality arrived, she said it was the end of the world.  But I'm going to tell them all this weekend." Cole notes that Sister, his bff, already found out by accident, but she wants Ty to tell her in person.
Also, they are having a long-distance relationship problem. Cole lives in Atlanta, and Ty lives in Athens, 72 miles away.

Ulp, Cole hides in the closet as Mom comes in.  She discusses the life-threatening Steel Magnolias disease that she had last year, which left her "a sentimental puddle," so she really wants Ty to find a girl and "settle down." 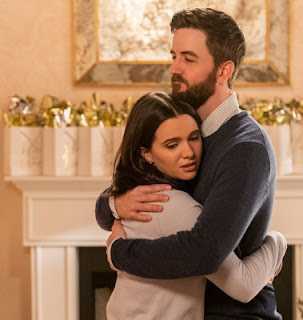 Scene 4:  In the absurdly elegant parlor, Sister and her fiance Digby are discussing their secret: "As you know, Sweetheart, after the wedding we are leaving small-town Atlanta for Los Angeles so I can pursue my acting career.  Don't tell Mom!  She thinks acting is one step up from street-walking!"  Digby?

Scene 5: Mom and Dad discuss their secret: "As you know, Dumbbell, we hate each other.  I think you're a country bumpkin, and you think I'm a rich snob.  We're going to get a divorce.  But don' t tell the kids: they'll be devastated!"

Scene 6: Ty comes out to Sister in the stupidest way possible: "Seeing you and Digby so happy has made me realize that I'm happy, too.  So happy that you might say I'm...gay."  Sister is proud of him for having the courage to come out. Digby?  How did the poor guy survive middle school?  "You can tell Dad, but don't tell Mom.  She'll stick her head in the oven."

Sister tells Ty her secret about moving.  Whoops, for a wedding present, Mom and Dad bought them a house in Atlanta!  Complications! 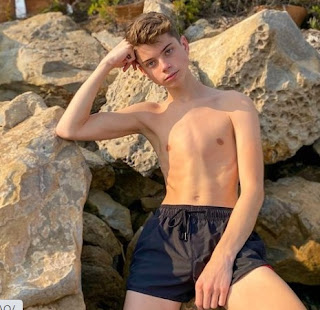 Scene 7:  Sister trying on wedding dresses with Cole and her gal pal, Mim Tinkelpaugh (and I thought Digby got bullied a lot!).  Mim is trying to get with Ty.  Sister explains that he's...um...seeing someone.

Mom comes in to complain about Lee's cousin Renee doing something weird "with her bridesmaid's dress."  Sister explains that they have come out as nonbinary, and prefer the name Ren (Aiden Langford, cisgender gay).  Mom huffs: "More LGBT XYZ nonsense!  You give me one week with her, and I'll straighten her out!"

Scene 8:  The rehearsal dinner.  Ty is upset because women keep hitting on him.  Mom tells her friends that Ren is now her nibbling, a gender-neutral term for the child of a sibling.  They smile politely.   Wait -- why are the guests all there?  Rehearsals are only for people in the wedding party, who have to know what to do).  While rehearsing the vows, Sister becomes so stressed about the various secrets she's hiding that she blurts one out: "Did y'all know that Ty is gay!"  Horrified, she runs out.

Mom takes charge, clears the room, and apologizes to Ty: "She was just stressed.  She didn't mean any of those horrible accusations."  Ty says that he actually is gay, but Mom won't have it: "You are not that way!  Don't talk such nonsense!"

Scene 9:  Minutes after discovering that his son is gay, Scary Redneck Dad grabs a gun and asks if he wants to take a drive into the woods to relax.  Um.... no, thanks, Dad, I'd rather live.  But it's ok, they've been going hunting together since Ty was a kid, and Dad is fine with him being gay.  He actually wants to talk about his marital problems.

Scene 10:  Mom visits Cole the Boyfriend: "You're a real gay, as swishy as the night is long.  But Ty is  normal.  Could you talk some sense into him, show him what real gays are like?"  Cole: "You don't have to be swishy to be gay."  Mom: "But I just can't imagine Ty choosing your lifestyle."  Cole: "You don't choose to be gay."  I had conversations like this with heterosexuals a lot, back in the 1990s.  Not in 2020.  But I guess the intended audience -- who tuned in for a story of "faith and forgiveness" -- hasn't had them yet.

Scene 11: Uh-oh, Dad accidentally shot Ty during their late night hunting expedition!  He's ok, just grazed, but everyone rushes to the hospital, and and Mom sees Cole kiss Ty!  Plus they all see Sister playing a vampire on tv! (Remember, she was keeping her acting career a secret.)  Mom doesn't know which secret to be more horrified by.

Scene 12:  After calming down a bit, Mom asks Ty if Cole had been flattering him to confuse him, make him think that he might be gay.  Ty says "No, I made th first move. He didn't want to get involved someone who was in the closet, but I won him over."  Mom: "I could set you up with a therapist who works with confused kids."

Ahh, there's a live possum in the parlor!  Shoot it!  But they're not concerned: "Maybe it's your spirit animal."  Now I know these people are from the South.

Scene 14:  The wedding.  But before it starts, Sister and Digby (Digby?) clear the room and say that they already got married, downtown.  They just didn't want any more drama. (Maybe do this before you rent the hall, buy the outfits, and invite 500 people?).

Mom  takes the top of the wedding cake to her room to eat while being depressed.  Meanwhile, the other problems are resolved: Ty and Cole's long distance relationship (they move in together), Digby and Sister's move (they'll stay in Atlanta, where there is lots of film and tv work). 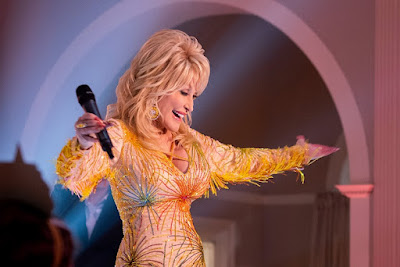 The reception goes on as planned.  Surprise!  Dolly Parton performs!  "Two Doors Down," naturally.  Ty goes to Mom's room and convinces her to come down to the party.  Everyone hugs.  Then Dolly sings "Aud Lang Syne."  Did you know that this wedding was scheduled for New Year's Eve?  Yeah, me neither.
Beefcake:  No.
LGBTQ Characters: 3
Anachronisms:  A weird juxtaposition of time periods.  One moment they're in 2020, and the next they're having a conversation right out of the 1990s: "How do you know you are that way?"
Problems for the Sake of Drama: 4
My Grade:  C
Posted by Boomer