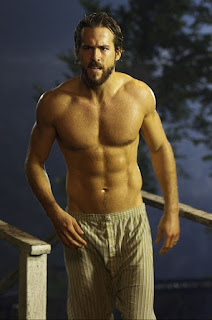 The Croods (2013) is an animated comedy about a family of crude, not-quite-evolved homo sapiens who experience a generation gap caused by teenage daughter Eep's boyfriend, a more-evolved teen idol-type named Guy (voiced by Ryan Reynolds).

I didn't watch the movie, worrying that it would show a ridiculous ignorance of prehistory, like humans co-existing with dinosaurs (over 50% of the U.S. population believes that they did).  But apparently there are no gay subtexts. 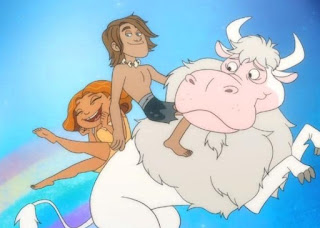 A prequel tv series, Dawn of the Croods, streamed on Netflix from 2017 to 2020, with younger, cuter Croods immersed in an entire community: rich, poor, intelligent, stupid, bureaucrats, workers, sentient animals.  Yes, there are dinosaurs.  Guy isn't around, but not to worry, there's a Guy-like "dreamy boy" whom Eep gets a crush on (they don't date).

In the last episode of the series, "This is an End," a meteor is headed toward the valley so everyone will die unless they come up with a plan.  We see flashbacks, strategic sessions, psychedelic drugs, a pteradactyl-powered space ship. Finally they accept their fate:  "Death is a part of life.  But it doesn't matter.  What matters is spending your life with family."

Then they get the idea of rolling a boulder into the volcano and shooting it at the meteor.  It works! 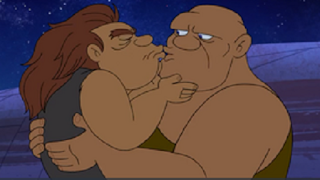 Everyone celebrates by kissing and hugging.  Mostly boy-girl, but also two girls (hugging only), two men, a man kissing a pile of meat, a boy kissing his own image, and a man trying to kiss a dog monster, which eats him.

The producers confirm that they are indeed a gay couple, not one of the ridiculous kissing objects.

So who are these guys? Did they pop up out of nowhere, just to add gay representation at the last minute?

They are definitely not regular characters.  They appear in three episodes, and get only one line between them. 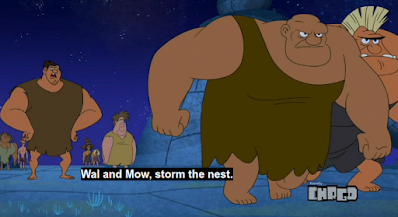 In "Voice Fail," Wal, the bald guy, appears alone in a crowd scene.    Later he is paired with fellow muscleman Mow for a hunt.

Wal and Loo appear together in "Weighting is the Hardest Part," but only Loo, the little guy, speaks.  He wants to know if he has made the hunting team, and gets marked down as "predator chow." 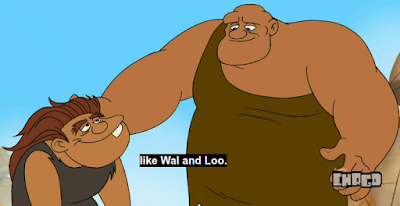 In "Flowers for Munk," two guys are slacking off, and the boss, Amber, tells them to get back to work.  "No make Amber separate you two, like Wal and Loo."  (She's the only cave person who talks that way)

The two are standing on opposite sides of a line drawn in the dirt.  Loo "texts" an unhappy emoji on a slate, which Amber threatens to share with the whole hunting party.

So there's was blink-and-you-miss-them non-speaking gay couple on Dawn of the Croods.  Is that enough representation for an entire tv series?