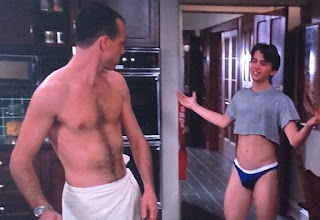 I already covered the years 1984-85 and 1986, so this is filling in the blanks.  I move to West Hollywood in June 1985, found a small apartment (actually a one-room cottage) and three part time jobs, and began the whirl of life in a gay neighborhood: gay church, bookstore, supermarket, gym, laundromat, cookie place.  Apparently I had not yet been socialized into the rule of never setting foot outside a gay neighborhood, if you can help it, so I left often: 11 movies in theaters, as many in six months as I would see in a whole year later on.
August: Weird Science. Two nerds use weird science to build a woman, who becomes a big sister rather than a sex toy (not to worry, they both meet the Girls of their Dreams).  Lots of male nudity, including an underwear scene with Ilan Mitchell-Smith, who would go on to become a history professor.

August: Teen Wolf.  I had just met Michael J. Fox, so I was curious to see if there were any gay subtexts in this story of a boy who "comes out" as a werewolf.  Nope: "I'm not a fag, I'm a werewolf."

September: After Hours,  which would become one of my favorite movies. Griffin Dunne (previously seen in American Werewolf in London) get swept up in the bizarre, surreal world of New York City after hours.  Gay characters are presented matter-of- factly, and even kiss.  I guess the producers thought it would be ok if they only inhabited an underground night world.

October: Dreamchild.  The elderly Mrs. Hargreaves, who inspired Alice in Wonderland when she was a girl, deals with reporters, tabloids, and her conflicting memories of Lewis Carroll.  I went with a guy who had no idea what was going on, since he never heard of Alice in Wonderland.  How is that possible?  (He also didn't know that the Wizard of Oz movie was based on a book series.)

October: Mishima: A Life in Four Chapters. It was nice to be able to go to a gay-themed movie without having to drive 50 miles to a theater in a different city.  Unfortunately, this one closets the gay novelist, making his obsession with muscles irrelevant to his heterosexual identity. 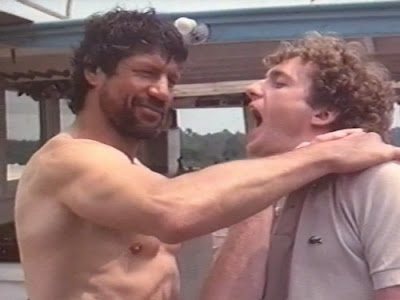 October: Remo Williams: The Adventure Begins.  Obviously the producers were expecting a blockbuster, followed by numerous sequels and an action hero as iconic as Rambo.  But Fred Ward (Remo) was no Sylvester Stallone. Hint: have him take off his clothes!

October: The Silver Bullet. I may have seen this one on tv later.  Teen idol Corey Haim, in a wheelchair, fights werewolves and wins the Girl of His Dreams.

November: My Beautiful Laundrette. A gay couple in modern Britain fight homophobia, racism, and culture clashes.  I don't remember much about it; maybe I was planning to see it, but didn't, for some reason.

November: Bad Medicine. Steve Guttenberg (sigh) goes to med school in a racist-stereotype Central American banana republic, butts heads with the evil Dean, and wins the Girl of His Dreams. It's hot down there; why doesn't he take off his shirt now and then? 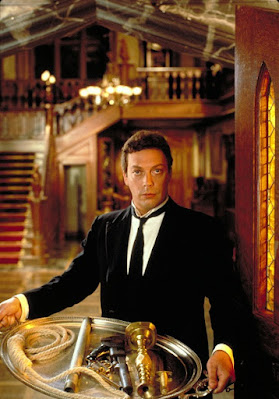 December: Clue: The logical-deduction murder-mystery game brought to life, with six strangers played by recognizable 1980s stars.  All have dark secrets, and of course Mr. Green's dark secret is being gay (except, in one of the three variant endings, he turns out to be a straight undercover cop).  Tim Curry plays the butler Wadsworth, who is also straight.

December: Legend: In a fairytale world, a princess and a bad boy (Tom Cruise) fight a demon played by Tim Curry.  Why did we keep expecting him to play gay characters?  He was obviously trying to disassociate himself from Rocky Horror by playing as many straight/masculine guys as possible.