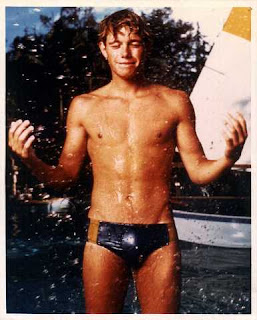 Why is Christopher Atkins a gay icon?  To the best of my knowledge, none of his characters have been gay, although he did have a part in It's My Party (1995), about a gay man (Gregory Harrison) with AIDS.

And his character on Dallas (1983-84), Peter Richards, a psychology major who mentors Ewing heir John Ross Jr., can be read as gay-vague, even though he is bedded by an older woman 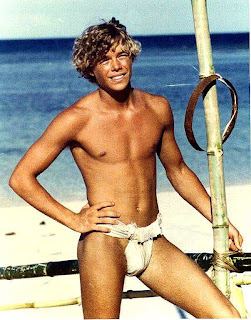 Blue Lagoon (1980), the movie that made him a superstar, is entirely heteronormative.  Boy and girl grow up on a desert island together, Adam and Eve in Paradise before the fall, with no need for anyone or anything else.

Then he played a swashbuckler (The Pirate Movie), a stripper (A Night in Heaven), a lifeguard (Wet and Wild Summer), a sexy vampire (Dracula Rising), a professional gambler (Shoot), and. . .well, just about every profession that has been featured in a Harlequin Romance, always with a fade-out kiss. 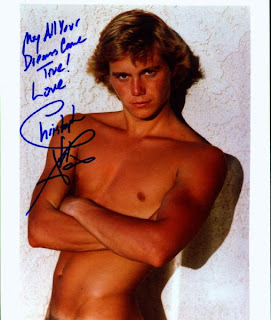 Is it because of his body?  It was not muscular, but it was slim, toned, tanned -- and visible.  During the 1980s he was  more comfortable displaying himself on camera than any other actor in legitimate film, and he's still going strong. He's had so many nude scenes that it's hard to keep track of them all.

But is beefcake enough?  Arnold Schwartzennegger has appeared nude a lot, also, but he's hardly a gay icon.

Maybe it's because of how his body was displayed.  Men on display on screen are usually in instrumental poses -- they are fighting or having sex.  We're not supposed to be desiring the bodies, we're supposed to be admiring their utility.  But Christopher's poses were usually ornamental -- he was standing, or dancing, or lying on a bed, doing nothing, displaying his body for its own sake, as an object of beauty. 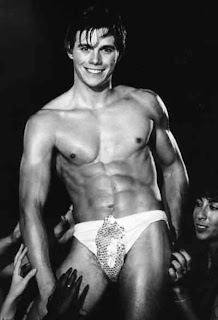 Chris thinks it's his penchant for nudity (what other major star has nude pictures of himself on his own website?).  In a recent interview, he stated: "The 80s was a big time for the gay movement and here came a movie (Blue Lagoon) where it was male nudity being prominant rather than female nudity and so [I] became sort of an iconic poster child at that time."

Maybe it's his amazing gay-friendliness.  During the 1980s, most male actors refused to acknowledge that they had gay fans, or acknowledged them with a hysterical protest of their own heterosexuality, but Chris genuinely liked and supported his gay male following, and that in itself helped not a few come out: "It's ok to think Chris is attractive -- it's ok to be attracted to men." 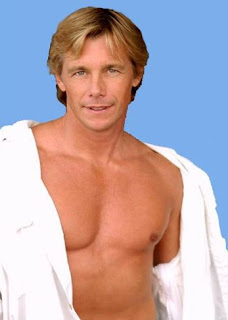 There are nude photos of Chris Atkins on Tales of West Hollywood.