Ask any male boomer when he realized that he was gay, and he’ll most likely say when he saw Robinson Crusoe on Mars (1964). I saw it in the spring of 1968, on the family’s brand new color tv set.

The plot is obviously a version of Robinson Crusoe: after crash landing on the frigid Red Planet, astronaut Kit Draper (Paul Mantee) builds a cave habitat so warm he can walk around shirtless or in a tight-black t-shirt, displaying an amazingly buff, hairy chest. 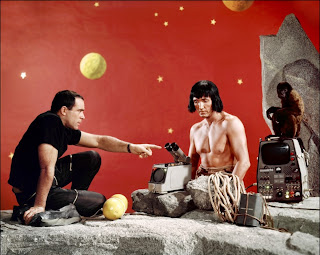 He has food, water, and a pet monkey, but he is intensely lonely. Then an alien mining company establishes a beachhead nearby, and he helps himself to one of their slaves. “I prayed for a companion,” Kit exclaims, “And I finally got one!”

Somewhat Aztec in appearance, “Friday” (Victor Lundin) is so accustomed to the Martian cold that he can comfortably walk around in nothing but a kilt, displaying a massive, sculpted body, with golden skin, thick arms and shoulders, and a smooth, hard chest.

The two men are extremely physical in their interaction. Shortly after they meet, Kit takes Friday’s hand and places it on his own knee, an image that is intensely intimate and sensual. Kit is buried in a shower of space debris and nearly suffocates, and Friday rescues him. As they walk away, Kit wraps his arm around Friday’s waist.  At the end of the movie, they are rescued, and go back to Earth together, permanent partners. 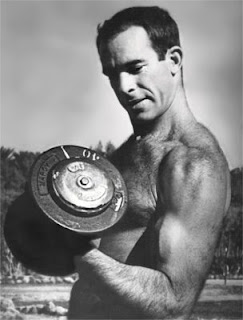 Who would produce such a film, about two men who love each other and build a home together, in the dark homophobic days of 1964?

This was Paul Mantee’s first credited acting role; he went on to make dozens of two-fisted movies, sometimes with “man” in the title to emphasize the intended audience, such as A Man Called Dagger (1967) and That Man Bolt (1973), and he then settled down to write novels about heterosexual Italian-American adolescents.  And he obviously stayed in shape.

Victor Lundin played a series of Klingons, Indians, savages, and bad guys, and cut some country-western records. Today, on his website, he sells a cd with a song about how much he likes girl-watching. 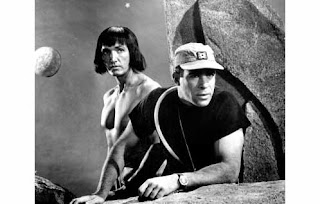 Neither of the writers seem obvious gay allies, but when we look at the director, Byron Haskin, we find movie after movie set in steaming jungles, where men wear next to nothing and fall into each other’s arms a lot: Man Eater of Kumaon (1948), Tarzan’s Peril (1951), His Majesty O’Keefe (1953), Little Savage (1959). That explains the beefcake; what explains the bonding?