Looking for Muscles on The Andy Griffith Show

On a 1960 episode of Make Room for Daddy: nightclub entertainer Danny Williams (Danny Thomas), traveling through the rural South, is arrested by corrupt sheriff Andy Taylor (comedian Andy Griffith).  His sponsor liked the episode so much that they spun Andy off into his own hayseed comedy, The Andy Griffith Show (1960-1968).  Now the slow-talking but wise sheriff of Mayberry, North Carolina, Andy rarely did any police work; he was a single dad, busy with the humorous catastrophes of his friends and family.

I know we watched; my parents were big fans of hayseed comedies, and it was sandwiched between some of their other favorites, Family Affair, and Carol Burnett.  But I don't remember a single episode.  I must have been rolling my eyes and saying "Can't we watch Felony Squad, starring former Physique Pictorial model Davis Cole (left) instead?" 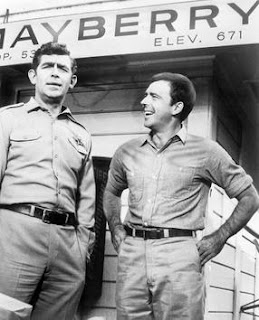 When Andy Griffith left the show in 1968, it was renamed Mayberry RFD (RFD stands for "Rural Free Delivery," a mail service).  Most of the other regulars stayed on board, and the focus became single dad Sam Jones (Carol Burnett Show regular Ken Berry, right).  It lasted until 1971.

I've watched a few episodes recently for research. No shirtless shots, not a lot of beefcake (although Ken Berry has some beneath-the-belt things going on in some scenes).  But quite a substantial gay connection, for a hayseed comedy:

2. Ron Howard (his son Opie) went on to the gay-subtext Happy Days, and then became one of the more homophobic directors in Hollywood, heterosexualizing gay characters and adding homophobic jokes. 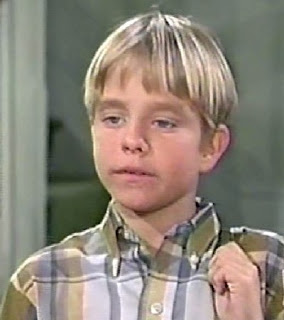 3. Jim Nabors (gas station attendant Gomer Pyle), spun off into his own gay-subtext series) and is gay in real life.

4. Buddy Foster (Sam Jones' son) is the brother of lesbian actress Jodie Foster, and played several gay-vague roles, including episodes of Chips and The Mighty Isis, before he retired from acting. 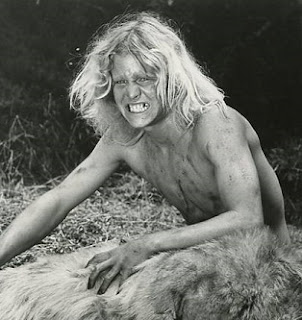 Here he shows some muscles as a feral Wild Boy on a 1975 episode of The Six Million Dollar Man.

6. The character of Howard Sprague (Jack Dodson) was a gay-stereotyped mother-obsessed milquetoast with an interest in music and art and no interest in women, one of the few gay-coded characters in hayseed comedies (or in any 1960s comedy, for that matter).