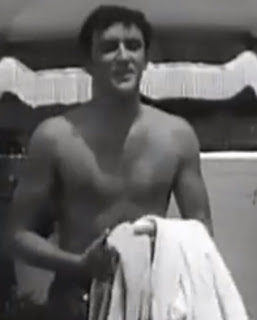 The comedy team George Burns and Gracie Allen spent years on Vaudeville and in movies about George being exasperated by Gracie's daffiness, but anxious to date her anyway.  They moved into radio in 1932, and onto television in 1950, playing "themselves" in The George Burns and Gracie Allen Show.  They were technically famous comedians who had celebrity friends and occasionally had to go down to the studio to film something, but otherwise they had "ordinary" problems like a burnt roast or a late car payment.

Attuned to growing numbers of teenagers in the potential audience, the duo added their real-life son Ronnie to the cast in October 1955, and made him gay. 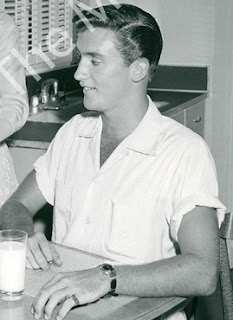 Ronnie was soft, sweet, and sensitive, studying to become a serious actor at the Actor's Studio (with alumni including the gay couple  Paul Newman and James Dean). He expressed a haughty disdain for his parents' lowbrow comedy, and briefly changed his name to Cobb Cochran, a parody of the macho name changes that casting agent Henry Willson mandated for his stable of gay, bi, or gay-friendly clients (Rock Hudson, Ty Hardin, and so on).

He had an ongoing "friend," fellow actor Jim Boardman (Hart Sprager), with whom he took an apartment in the bohemian Greenwich Village. 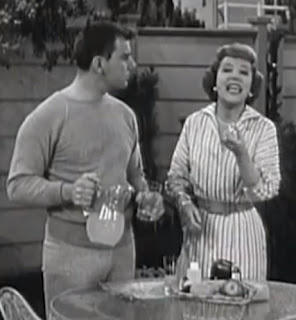 Several plotlines involved people being shocked when they stumbled upon Ronnie kissing a girl or discussing marriage with a girl -- what's Ronnie doing with her?  He's not...you know....

It was always a misunderstanding: the two were rehearsing a play, or the girl was confiding in Ronnie about her boyfriend problems.

The gay Ronnie lasted for only about a season and a half.  In the spring of 1957, for unknown reasons, he suddenly became an ordinary college student, with a new best friend, Ralph (the very bulge-worthy Robert Ellis, also seen on Meet Cloris Archer).  Both were obsessively girl-crazy. 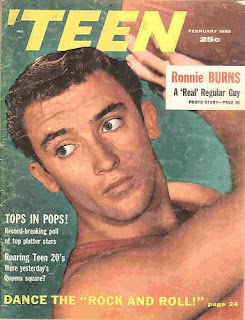 Maybe the network couldn't handle such a strong gay subtext.

Trying to quash the gay rumors, George arranged for his son to become a "heterosexual" teen heart-throb like Ricky Nelson, but he only recorded one song, "She's Kinda Cute" (1958), which didn't chart.  He got little exposure in teen magazines, just this article that insists that he is a "real regular guy," not. . .um. . .you know, gay.

When the series ended, Ronnie starred in Happy (1960-61) and Anatomy of a Psycho (1961), and a few other projects.  So closely aligned were tv personalities with their characters that he was the subject of gay rumors throughout his life.  He never made any public statements, but he wasn't part of the 1950s gay Hollywood scene, and he had two long-term marriages.