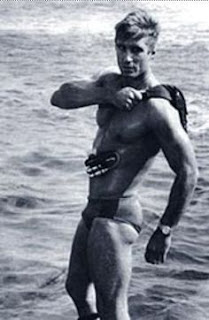 When I was living in West Hollywood, half the guys I met were aspiring actors, and the other half had dated or hooked up with actors.  If you were gay and in show biz, I knew you, or had met you, or had at least heard about you in a conversation.

But I never met, or even heard of, Antony Hamilton.

Born in 1952, he danced for the Australian Ballet and modeled in Europe, both for fashion magazines and for physique photographers like Bruce Weber, before hitting Hollywood. 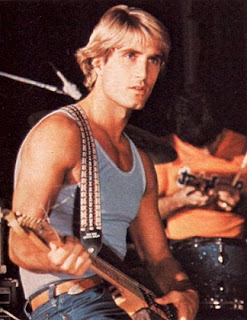 His first role was the vampire-disco comedy Nocturna (1979), starring John Carradine as Dracula and Yvonne DeCarlo as someone named Juglia Vein.

But his big break was as the legendary muscleman in the tv movie Samson and Delilah (1984).

Then he was offered a role as model-secret agent Jack Stryker, a replacement for the deceased Jon-Erik Hexum in the last seven episodes of Cover-Up (1984-85).

In Mirrors (1985), sort of like Chorus Line with ballet dancers, he plays the dancing great Gino Rey.

He was considered for the new James Bond in The Living Daylights (1987), but he was gay in the homophobic Hollywood of the 1980s.  What if he was outed?  They went with a heterosexual.

I watched The Charmings, but don't remember his episode.

And a couple of horror movies..

He played Max Harte in Mission: Impossible, a remake of the classic 1960s tv series that lasted for two seasons (1988-1990).  Peter Graves reprised his role as Jim Phelps, leading a team of experts engaging in top-secret government operations, but now they were more likely to capture criminals than interfere with the political structures of foreign countries.

On Sunday nights in 1988-89, I was watching Family Ties and Married...with Children.

He has two more tv guest spots listed on imdb, plus a minor role in Fatal Instinct (1992). 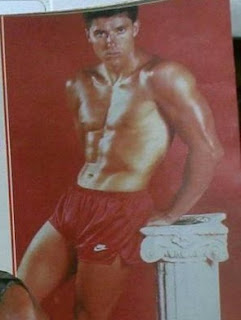 So an exceptionally hot gay actor was wandering around West Hollywood the same time as me, but our paths never crossed.

What other treasures did I miss out on?