"Inspector Manera": A Dazzling, Dreamy Guy Solves Murders with the Help of 10,000 Women 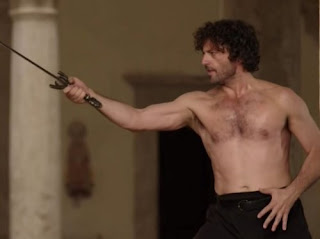 I've never in my life read a blurb describing a male protagonist as attractive.  It's always "That's my boss, Jonathan Hart.  He's quite a guy.  That's his wife.  She's gorgeous!"

The male protagonist is described as "dreamy" and "dazzling."  I don't dare imagine that Inspector Manera himself will be gay, but certainly there will be gay representation.  And dazzling Italian countryside.  I'm in.

.Wait -- the opening shows Manera kissing two women and gazing into the eyes of four, not to mention a slow closeup of a lady's legs.  Before I commit to a full hour, I'd better go through it on fast forward.

The plot: Manera starts his job as inspector at a small-town police station, spars with the new lady detective (with whom he has a history), and starts work on his first case: a wealthy professor (there are wealthy professors?) is shot in what is apparently a suicide.  But Manera thinks that it was murder.   As Boris Badenov would say, Of course is murder! Otherwise be lousy story.

Suspect #1: A lady from town who found the body.

Suspect #2: The professor's gardener (professors have gardeners?)  Could she have been secretly in love with him?

Suspect #3: His ex-wife, who broke into the mansion later and took something from his safe.  Something incriminating?

Suspect #4: His doctor. who never actually graduated from medical school.  Could the professor have threatened to reveal his secret? 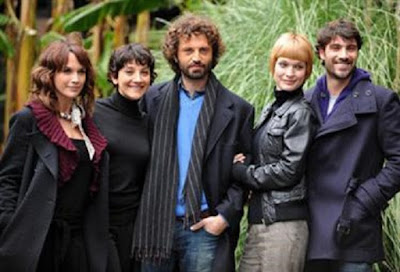 Beefcake: Manera takes his shirt off twice.  There are a few other cute guys wandering around, but in the background.  The main cast is all ladies.

Other Sights: Not nearly enough Italian countryside, and no street scenes in the city.

Women gazing at Manera as if he's a popsicle: 6.

Kissing scenes: Only the fade-out kiss.

Will I Keep Watching: Heck, no: