"Soul": Almost a Gay Subtext in the Afterlife 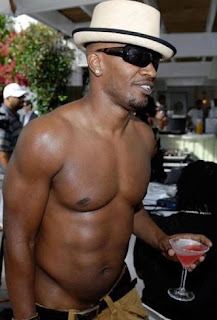 In the Disney-Pixar animated Soul (2020), Jamie Foxx plays Joe Gardner, a middle school band teacher who dreams of making it big as a jazz pianist.  On the day of his big audition, he falls into an open manhole and dies.  But instead of going to the Afterlife, he accidentally ends up in the Before-Life, where human (or post-human) mentors help newly-created souls find their "spark" so they can be born.

Mistaken for a mentor, Joe is assigned 22, a soul who doesn't want to be born, and has terrorized such previous mentors as Copernicus, Mother Teresa, and Muhammad Ali.  They manage to sneak back to Earth, but 22 ends up in Joe's body, and Joe ends up in the body of a cat!  They have to find some way to get to Joe's big jazz performance, deposit Joe's soul in the correct body, and send 22 back to the Before-Life before anyone in the soul-creating bureaucracy notices. 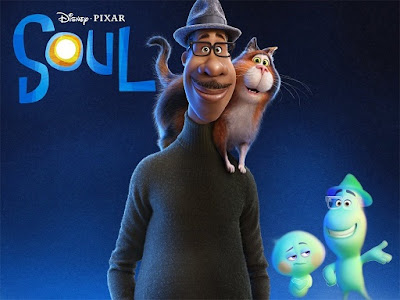 Throughout, Joe doesn't express any heterosexual interest.   He doesn't flirt with the female principal of his school, or with the female jazz saxophonist who gives him his big audition; there are no pictures of girls in his apartment; his mother berates him for being a "middle aged failure," but doesn't mention his lack of a wife and kids. 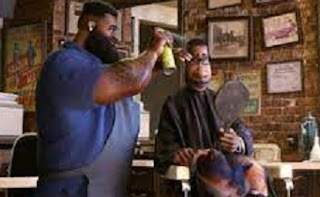 He visits his mother's dress shop, where the middle-aged ladies fawn over him, and hangs out at a barber shop with men.

Originally unborn souls don't have a gender -- they are unvariegated round blue blobs who can use whatever voice they want.  Then the premise changes, and unborn souls have a gender after all: 22 is female.  But when she's inhabiting Joe's body, there are no gender-norm jokes or sudden expressions of heterosexual interest.

Jamie Foxx doesn't have a great track record on gay rights, nor does one expect  fundamentalist Christian writer/director Peter Doctor to be an ally, so certainly Joe isn't canonically gay.  Nor is anyone else in the movie (Joe's barber shop friend specifically mentions a daughter to establish his heterosexual identity).  But the absence of expressed heterosexual desire and hanging-out-with-men is sufficient to read Joe as gay.

While inhabiting Joe's body, 22 has access to all of his memories.  She asks "Who's Lisa?"  Joe doesn't answer.

Later, 22 says "I think you should call Lisa."  Joe responds: "I don't have time for a relationship right now.  I'm busy working on my music."

At least, at the end of the movie, when Joe learns the meaning of life, he doesn't call Lisa.

By the way: the meaning of life is: enjoy the small things.