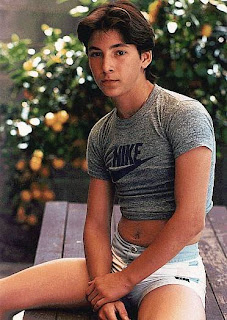 After starring as the barbarian Atreyu in The Neverending Story (1984), Noah Hathaway got the full teen idol treatment. His cut-off t-shirt and skin-tight white shorts became a common sight in the teen magazines, and every time he went to the gym, a photographer was there to show the world his biceps and abs. 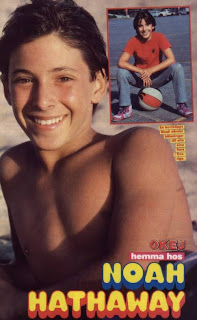 He couldn't compete with super-hunks like Robby Benson and Scott Baio, but he was cute enough to inspire many romantic fantasies. 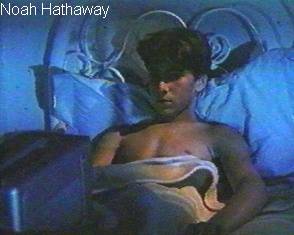 His roles were rather scarce, but memorable.  In Troll (1986), he plays Harry Potter (not that Harry Potter), a teenager who displays a muscular chest and has no interest in girls.  Instead, he must save his sister.  No wonder gay boys found a kindred spirit in him, and speculated that he might be gay in real life.


Unfortunately, his response to the speculation was not always gracious; he tended to become livid with rage and shout his denials.

In 1986 Noah retired from acting.  He studied dance and martial arts, and competed in the sport of motorcycle racing.  Recently he has starred in the independent films Sushi Girl (2012) and Mondo Holocausto (2012).  Mellowing as he pushes past 40, he has become more accepting of his gay fans.