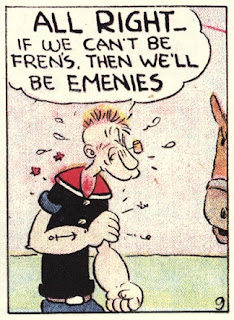 During the 1960s, Captain Ernie's Cartoon Showboat often showed Popeye cartoons.  They were awful, nothing but heterosexist morality plays.  In every single one of them, the absurdly macho sailor Popeye and Bluto vied for affections of sexist stereotype Olive Oyl, they fought, and Bluto was pulverized (even though he had a far superior physique).

Then in 1979, I stumbled upon a book called Popeye: His First Fifty Years, which talked about Castor Oyl, Ham Gravy, King Blozo, Tor, and Oscar.  Who were these people?

I discovered that the cartoons were the latest incarnations of  E.C. Segar's "Thimble Theater" comic strip, which began in 1919, starring get-rich-quick schemer Castor Oyl and his wise-cracking sister Olive.  In a 1929 continuity, Castor hired gruff one-eyed sailor Popeye for a sea voyage.  He became so popular that Segar added him to the cast, honed down his rough edges, and eventually made him the star of the strip.  It continues to run in some newspapers today.

There have been Popeye comic books almost continuously since 1948, published by Dell, Gold Key, Charlton, Harvey, and IDW.

There's a lot of gay content in the comic strip and comic book Popeye: 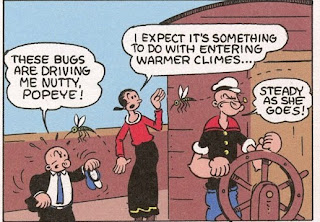 1.  He's sweet on Olive Oyl, but his main emotional bond is with Castor.  They run a detective agency together, rescue each other from danger, argue, break up, and reconcile.

2. Popeye has no interest in women other than Olive, but he develops several gay-subtext male friendships, notably with King Blozo.

Similarly, he becomes the object of desire of several men.  Reformed villain Tor keeps trying to kiss Popeye and saying that he loves him. 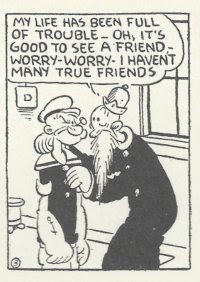 3. The comic strips and comic books mostly occur in male homosocial spaces -- ships, boxing rings, detective agencies.  But Olive constantly disrupts those spaces.  The other characters keep telling her to "wait here" or "stay home where it's safe," but she is a full participant in every adventure.  And when there's trouble, she proves herself a competent fighter, as good or better than Popeye himself.

4. Popeye has no qualms about gender transgressions. He frequently dresses in women's clothing to accomplish some plot point.  When he becomes the ward of the infant Swee'Pea, he joins a women-only parenting class.

All that changed in the heterosexist "every man's fantasy" world of the cartoons.

See also: My review of the 1980 Popeye movie.
Posted by Boomer