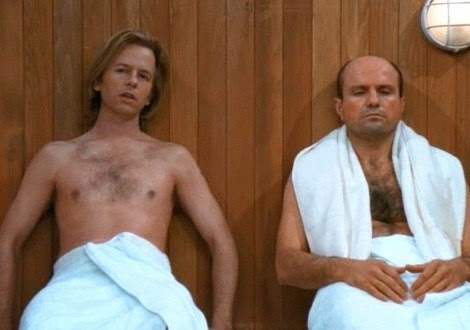 Beginning with The Mary Tyler Moore Show, many, many sitcom have featured a gung-ho female journalist paired with a stick-in-the-mud male boss.  Usually a romance develops.  But not in Just Shoot Me (1997-2003). 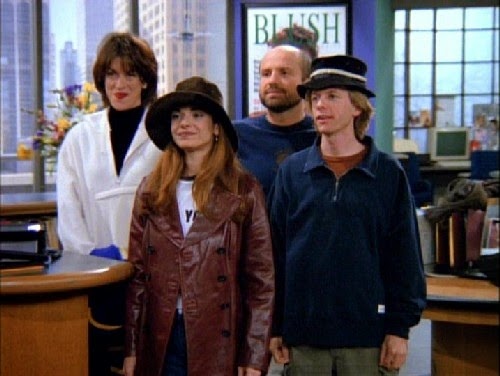 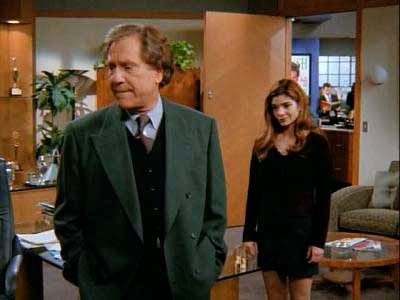 There are episodes about the clash between hard-hitting journalism and froth, but mostly the series is about relationships.  Maya bickers with her Dad, clashes with his new wife, and gets boyfriends, eventually Elliot.

Nina competes with other supermodels, falls in love with the wrong man, pretends to be things that she's not, and gets her comeuppance.

They all become close friends.

There was some gay interest:

Nina Van Horn was an outrageous, boozy, profane type, the sort gay men like to emulate in their drag queen personae.

Enrico Colantoni,  hairy and rather muscular, took off his shirt often (he even posed semi-nude for Playgirl).

Gay people were referenced on occasion, the usual "mistaken for gay" and "pretending to be gay to enjoy the tremendous advantages gay people have" episodes.

Only two actual LGBT persons: the high school buddy who had a sex change; and a female model has a crush on Maya.

Typical for how the 1990s handled gay "issues," as a problem for the heterosexuals to solve.

You'd think they could do better, and have an actual gay character in a recurring role.  But it came on just before or just after Will and Grace, and network execs probably figured that viewers couldn't stand two programs with gay characters on the same night.