Donelan: It's a Gay Life 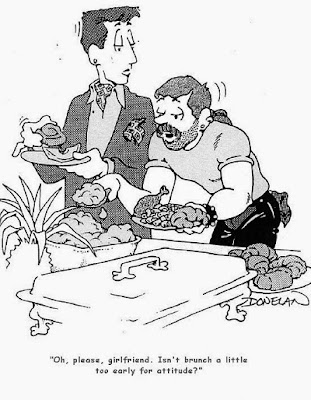 When I was in grad school in Bloomington in 1982 and 1983, I was able to get copies of The Advocate at the adult bookstore.  One of my favorite features was a series of single-panel New Yorker-style cartoons, "It's a Gay Life," by Donelan,  lampooning the culture of 1970s gay neighborhoods: brunch, boyfriends, leathermen, queens, cruising, decorating, activism.... 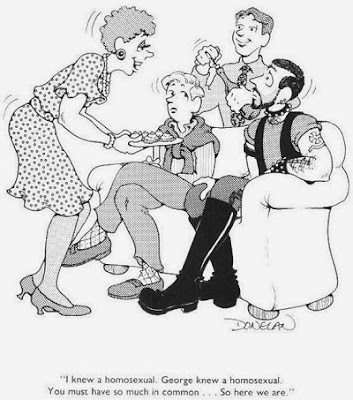 Some cartoons were about the reaction of straights, those who knew -- and were ok with it.  In a clueless, stereotyping way. 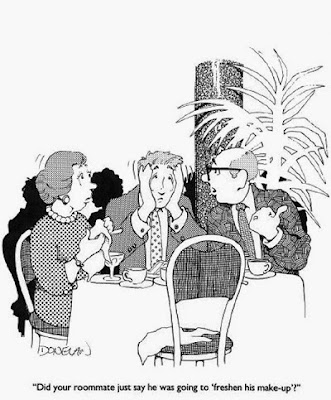 Others who didn't know, and didn't want to know.

"Did your roommate just say he was going to 'freshen his makeup'?" 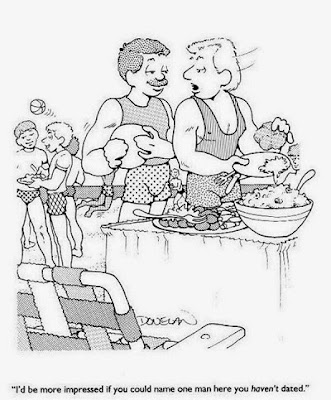 I was most drawn to the cartoons depicting gay men in pairs and groups.  There was a whole society out there somewhere, a place where being gay was commonplace, even expected, where straights were the interlopers and strangers.

"I'd be more impressed if you could name me one man here you haven't dated."

I wanted that world. 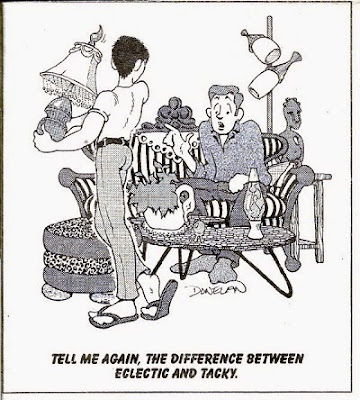 Gerald P. Donelan grew up in Plymouth, Massachusetts, and moved to San Francisco in the 1970s.  He published "It's a Gay Life" from 1978 to 1993.  There were two  reprints of his cartoons: Drawing on the Gay Experience (1987) and Donelan's Back (1988).  His work also appeared in Frontiers and in the Meatmen series of gay comic anthologies.

Today his work seems a bit dated, keying into feminine stereotypes a bit too much.  But in the height of the homophobic 1980s, it was a revelation.

"Tell me again the difference between eclectic and tacky."

See also: Do You Have Anything Gay?; Howard Cruse.