"Ginny and Georgia": "The Gilmore Girls" with More Sex and Murder 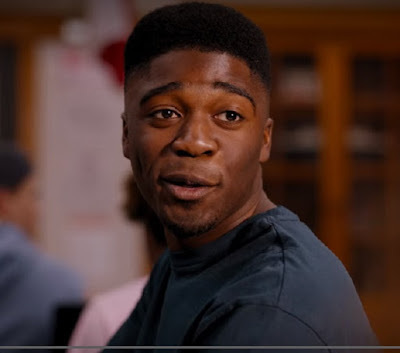 When you log on to Netflix, a promo immediately starts blaring at you: a high school girl takes down the teacher for assigning 16 books this semester, but only two by women and one by a person of color. Is he teaching literature or white male privilege? I could use some woke characters, so I started watching Ginny and Ginny or something like that.
Scene 1: Ginny is in a classroom, narrating: "My Mom had me when she was my age, 15, so I got the "sex talk" at age 7."  Hunkoid turns around to flirt with her.  She continues: "Sex.  Men want it, and they think you should give it to him."  Ok, all men are interested in sex with women.  No gay people exist.  Strike 1.
Hunkoid goes off to flirt with some girls with their hair blowing in the wind in slow motion (how do they get the wind to blow inside the classroom?)  Ginny seethes with jealousy.
A teacher calls her out of class to say that her stepfather has been killed in an accident.  Whoops, I thought this was a comedy.  Strike 2.
Scene 2:  The open-casket funeral.  Ginny overhears two women talking trash about her mother and accidentally on purpose bumps into them.  To be fair, Mom is dressed in a Black Widow outfit and being overly dramatic about her grief.  She's obviously delighted that the geezer is dead: she inherits all of his money, and his own son gets nothing.
Scene 3: Ginny, her Mom Georgia, and 9-year old Austin are heading north in their convertible.  Georgia shoves her feet into Ginny's face and sings that song that Ashton Kutcher sings in that Cheetos commercial -- wait, it's a real song about catching someone having sex.  I thought it was weird for him to catch Mila Kunis eating Cheetos in the shower.
They have enough money now for Mom to take a break from marrying men.  Maybe she'll even try dating for fun, have sex with someone she actually likes for a change.
Scene 4: They stop for gas at a small-town gas station (Interstate Highways don't exist, of course). A  fat redneck Southern sheriff stereotype sees Ginny pumping gas, stops his car, and walks toward her in slow motion (she's black-ish).  But then he sees that Georgia is white, and leaves them alone. 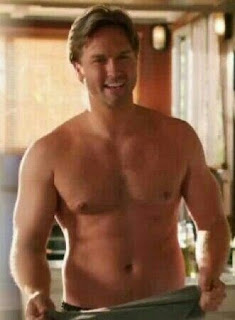 Scene 5: They arrive at ritzy small-town Massachusetts, with yoga studios and Thai fusion restaurants.  Better than Texas.  But this means the hunk from Scene 1 is gone forever.  Georgia sees a campaign poster for the Mayor, Paul something (Scott Porter), and thinks that she migiht want to have sex with him.  They arrive at their fancy federal-style house.
Flashback to a blond woman in a crappy trailer park, being assaulted by a man.  Hey, I thought this was a comedy.  She grabs a knife and slashes him to escape.  He calls: "I'm going to kill you. Mary!"
I'm confused. The women are both blond.  Is this another character, or did Georgia change her name? 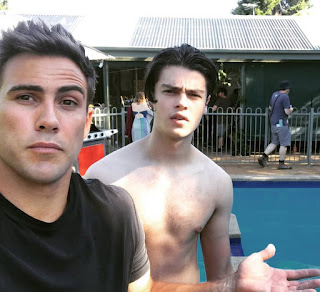 Scene 6:  It seems like I've been watching forever, and there's been only one hunk and no gay references except an assertion that all men are heterosexual.  I'm about to call it quits.
A third blond woman gets out of her car and berates her son for smoking weed (son is played by Felix Mallard, back).  She sees Ginny and Georgia unloading their stuff across the street, and comes over with a plate of  "welcome to the neighborhood" cookies.  This one is named Ellen.  Three blond women in the first five minutes.  Doesn't the director find other hair colors attractive?
Meanwhile, Ginny is talking on the phone to her dad -- apparently still in the picture, in spite of the five elderly stepdads.  She looks out the bedroom window to see the weed-smoking boy climbing ut of his window.  Wait -- Weed Smoker definitely lived across the street.  Is this another boy?
Scene 7: Georgia is dancing in front of a miror, practicing her flirtation and aiming her gun at random objects. 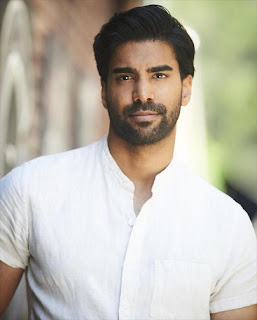 I'm going to stop there.  Fast forward:  Georgia starts dating the Mayor, and starts a blackmail relationship with Joe (Raymond Ablack).  She is a survivor of abuse, which apparently explains her "marry them and poison them" life strategy.  We're supposed to find her endearing, not reprehensible.
Ginny starts dating Marcus (Weed Smoker) and Hunter (Mason Temple, who, when you try to search for him online, you get a lot of photos of buildings).  She also gets a lesbian best friend, but gay men don't exist.
And we never see the hunk from Scene 1 again.
Posted by Boomer