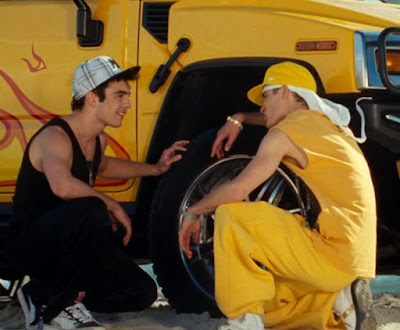 I was in a hurry to get something playing on Amazon Prime before my cereal got soggy, so I click on the first movie with a blurb that I hadn't seen before:  The Tuche Family.  No idea what it is about, except "tush" is slang for "buttocks," so maybe it's The Coneheads, but with butts instead of cones. I fast-forwarded, looking for gay content, and found this:

A teenage boy drives his car to the beach.  A boy named Raphael leaves his friends to check it out  "You can touch it," he says, introducing himself as Tuche Daddy.  They gaze at each other for a long time.

Is this a gay romance?  I'd better watch from the beginning: 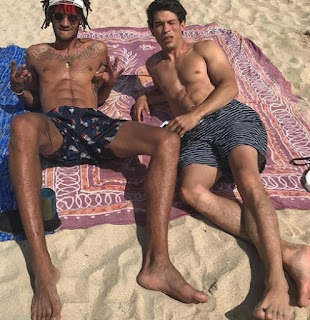 Scene 1: It's a French film, so tuche doesn't mean anything. A young boy named Donald narrates (also called Quack-Quack, or Coin-Coin in French).  He introduces us to his father, the ugly Jeff Tuche, a small town ne-er do well who decorates the town Christmas tree with dirty socks, offers the priest 20 euros to baptize his car, and is constantly coming up with schemes to evade the bill collectors.

His other eccentric family members include: Mom Kathy, who thinks she is the long-lost sister of Princess Stephanie of Monaco; self-indulgent teenage sister Stephanie; teenage brother Wilfred (Pierre Lottin), and Grandma Suze, who drinks "suze" all day and carries around her stuffed deceased dog.

Whoops, Wilfred is reading a magazine with a photo of a big-breasted woman atop a car hood.  Straight!  Could the gay scene be with someone else?

Scene 2: They win 100 million euros in the lottery!  They set out on the road -- wow, that's the sound the gas pump makes when you fill the tank all the way!  -- and reach Monaco, their new home.  Nice establishing shots.  Everyone stares as a crappy car full of rednecks stops at the ritzy Hotel Royale.  The concierge tries to stop them from registering.  The bank manager almost kicks Dad out,  But, as Jed Clampett discovered, money talks.

Scene 3: They move into their 36,000 euros per night suite (really ritzy; most hotel rooms in Monaco go for less than 250 euros).  Sister Stephanie finds that it doesn't stock her bargain-brand hair gel, so she has housekeeping bring some up.  Mom washes clothes and hangs them on the balcony to dry.

Meanwhile, an outraged hotel guests comes to the front desk. Grandma's stuffed dog fell off the balcony into his coffee. 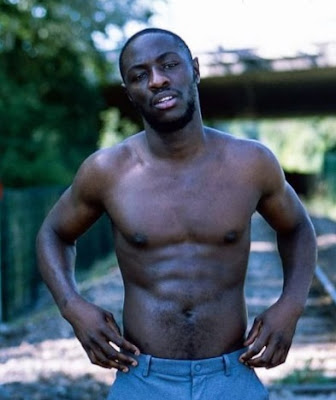 Scene 4: Breakfast.  They discuss how they are going to fit in to their "new homeland" (like the Clampetts in Beverly Hills).

The family goes shopping, and then takes a helicopter tour of Monaco (nice shots, but I'm getting tired of them.  This is like a travelogue).  Then it's off to Princess Stephanie's private club, where flashing 1,000 euro bills around doesn't work: they can only join with a sponsor.

A hot guy (Ralph Amoussou) does a triple-take at Stephanie.  Maybe he'll be their in.

Meanwhile, Dad is house-hunting.  The realtor shows him several palatial villas, but he doesn't like any until finally he says one is "ok.": the view out the window is the same as his wife's poster back home.  He also installs a suze fountain, a photo booth, and a french fry hut.

Scene 6: The next door neighbors get an invitation to the Tuche's housewarming party.  Dad disapproves of noveau riche hicks, so Mom Mouna, teenage Salma, and preteen Jean-Walid go alone. Uh-oh, I smell a love interest for the car-and-boob obsessed Wilfred.  They are the only ones who show up, but they actually enjoy the photo booth and the french fry hut

The teenage girls bond over discussions of Paris Hilton and film, and Dad plays soccer with Jean-Walid.  Both kids seem rather repressed, with "study all the time and don't have any fun" parents; maybe the Tuches will be their salvation.

Scene 7: The head of a private school agrees to admit Donald in exchange for french fries (which you can't get in Monaco) .

While Dad and Jean-Walid play soccer, Mom starts working on Mouna's salvation -- getting her to relax over "bubbly" (non-alcoholic faux-champaign), and Donald reads up on investments.  Maybe he'll be working on their stodgy businessman dad?

Meanwhile, Wilfred drives his new car to the beach. A teenage boy named Raphael leaves his friends to check it out  "You can touch it," Wilfred says.  He introduces himself as Tuche Daddy.  They gaze at each other for a long time.

This is the scene I saw at first.  I thought Wilfred was into cars and boobs because of the magazine.  Could he be into cars and dudes?

Back to Mom and Mouna.  "I'm sure he has a girlfriend," Mouna says. But he means her husband, no Wilfred.  They used to "have it all," but then he made a lot of money, and their relationship is over: "Money is poison." 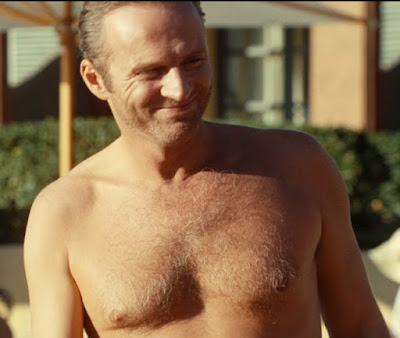 Scene 8:  Mouna agrees to sponsor Mom at the country club.  Old hags clutch their pearls as they walk past the pool (does anyone in Monaco do anything but sit by the pool?)  Suddenly a woman in the water yells for help, and a man named Daniel rushes to the resue.
Mouna and Mom introduce themselves and gawk at his muscles (a love interest for Mouna?).

Scene 9: Mom teaches Mouna how to go grocery shopping,  Meanwhile, Dad test drives a race car.  Could we get back to Wilfred being gay?

Scene 10: Donald narrates: "In 2 months we'd spent 20 million euros."  Ruh-roh. I know where this is heading.  Being rich is awful -- being poor is great.  What the owners of the means of production tell the workers..

Wilfred and his boy friends frolicking in the pool, Mouna flirting with Daniel, the two teenage girls ogling the hot black guy --  Georges Diouf, "Monaca's young hopeful" -- and Quack-Quack decides that he's going to be "true to himself" and reveal that he's smart.

Headmaster calls the parents in and reveals that he's getting A+ grades.  They don't believe it -- he must have cheated.

Later he explains to the Headmaster why he pretended to be dumb for 12 years: he was afraid that he wouldn't fit into a family of underachievers.

Dad goes home to find Mom alone.  The kids have scattered -- they're not a team anymore. (Teenagers having their own lives?  Horrible!) Donald still insists that he didn't cheat.  Everyone has grown apart.

Scene 12: Dad and Daniel at a casino, gambling and discussing the family problems.

Meanwhile, Mouna's two kids are eating dinner and discussing how the Tushes are "a real family."   Salma puts on makeup to go dancing with Stephanie.  Wait -- are they dating?

While she is gone, Mouna announces that she's leaving her husband, and packs up Walid to go stay with the Tushes.  Walid sleeps with Donald who bribes him to get his dad's email address.

At the club, Salma bribes the DJ to let Stephanie perform  (is Stephanie an aspiring singer?  I don't recall her getting an "I Want" scene).  Hot guy gawks at her. Later he approaches with a bottle of wine.

Meanwhile, Wilfred and his boyfriend are on the beach, looking at the stars. They discuss taking a shuttle to Jupiter and whether having rich parents make you happier. (No kiss?)

Mom and Mouna making cotton candy and discussing getting Mouna laid.   Jeff putters around his empty house, being miserable.

Scene 13: Breakfast.  Everyone is miserable.  Donald makes an intelligent comment, and everyone puts him down.  Wilfred: "You talk like a little faggot!"  Homophobic!  I thought he was gay.  Now I'm really confused.

Scene 14:  I thought we were ready for the climax and denoument, but no, more plot is happening: Donald meets with Mr. El Assad (Mouna's father) about his idea for Chinese tungsten interests.

The big charity bazaar.  Mom and Dad sing.  The boyfriends have their arms around each other.

Outside, Hot Guy and Stephanie kiss. "If Dad finds out we're together, he'll kill you." Why would Dad care if his teenage daughter dates?  Because he's black?

Scene 15: Dad has the opportunity of making a business deal, but he needs 100 million euros, and he only has 80.  What to do?  Mortgage his old house back home.

Meanwhile, Donald and Mr. El Assad fail to get enough investors to raise the 150 million euros needed to buy the Chinese tungsten mine.  They still need 80 million.  Donald knows where to get it.

Scene 16: Hot Guy tells Dad that he wants to marry Stephanie. Dad is  opposed because Stephanie is 18, too young to marry, but Hot Guy convinces him.

Turns out that Daniel has been playing the Tuches all the time.  Thugs steal the 80 million he collected from Dad, but not to worry, he and his Mum move on to a new scam in Grenoble.   But they didn't get the money; Donald stole it to invest in the Chinese tungsten deal, which is a huge success. 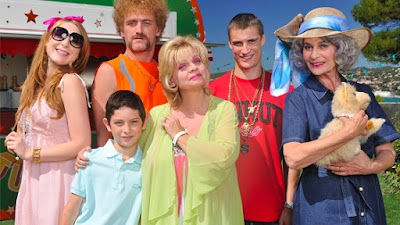 Scene 17: Donald doesn't tell the family that they haven't lost anything, so they think that they are poor again.

There's a final soccer game.  Wilfried is caressing Boyfriend's face. Then they all pack up and say goodbye.  Princess Stefanie has a cameo.  They move home,.

Scene 18: Donald finally tells them that they are actually rich.  But they won't make the same mistakes.  They stay home, and invite all of their Monaco friends for a barbecue.  Finally! Thank God!

Beefcake: Endless by-the-pool scenes with hunkoids, usually at a distance.

Other Sights: At first I liked the vistas of Monaco, but then I started getting swimming pool and beach fatigue.

Gay Characters: Is Wilfred being gay a non-issue, so it doesn't need to be developed?  Did it get lost among the various other characters' stories?  Or did the writers closet him into "ok, touch his face, an then we won't see you again for 20 minutes."

Plot Fatigue:  The interconnectd stories of Dad falling prey to a scam, Mom helping Mouna with her marital problems, Stephanie working on her singing career and getting a boyfriend, Donald pretending to be stupid and partnering with Mr. El-Assad, the other kid being redeemed through soccer, and Wilfred and his boyfriend gazing at each other.  And Grandma learning to speak again.  And Salma photographing everything. It was quite an ordeal.

By the way, Wilfred gets more time to be gay in the sequel.  He and his American boyfriend plan to get married.