When I was a kid in the late 1960s, it was hard to find beefcake on tv.  Wild Wild West and Tarzan were reliable, there were shirtless teens on Maya, and otherwise you had to hope that an episode of That Girl would have Ann Marie befriending a boxer, or Kirk would get his shirt ripped off on Star Trek. 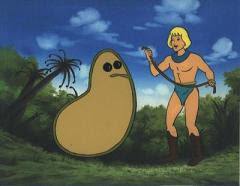 But Saturday morning cartoons more than made up for it, with huge numbers of teenage boys and adult men with muscular bodies on display (mostly spandex and open shirts, however; nothing like the semi-nudity of today).  In the fall of 1967, for example:

At 8:30, The Herculoids (1967-69), about a nuclear family of blond space barbarians who defend their planet from alien invaders.  The kid, Dorno, was about my age, but with an amazing build, like Tommy Norden from Flipper.  The dad, Zandor, was even hunkier. 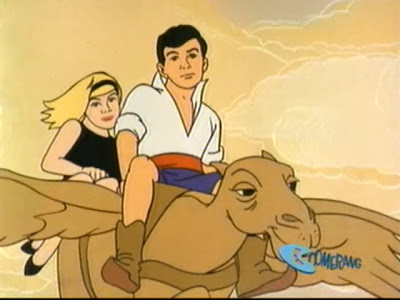 At 9:00, Shazzan (1967-69), about two teenagers trapped in an Arabian nights world with the titular magic genie (not to be confused with Shazam, the Michael Gray series).  Shazzan wore a black vest and no shirt, and the teenage boy, Chuck, wore a white shirt unbuttoned to his navel.  Note: the girl was his sister, not his girlfriend. 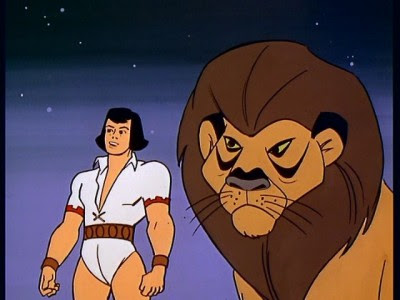 At 9:30, you had your choice of Space Ghost and Dino Boy (1966-68), about a boy trapped in a prehistoric world with a cave man guardian, or Samson and Goliath (1967-68), about a boy and dog who morph into superheroic Samson and his lion, Goliath.  I preferred Samson, who wore another shirt unbuttoned to his navel, plus no pants. 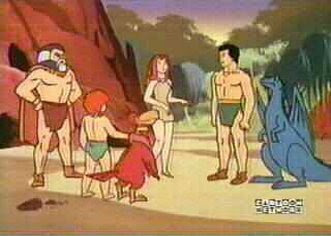 At 10:00, The Mighty Mightor (1967-69).  about a prehistoric teenager named Tor -- super hunky already, and a member of a tribe of bodybuilders  -- who morphs into the superheroic Mightor. Unfortunately, the girl in this picture was his sort-of girlfriend.

Then a quick lunch, a bit of playing outside, and it was time for an afternoon of The Magic Sword or an old Tarzan movie.