A Gay Spider-Man in a Video-Game? 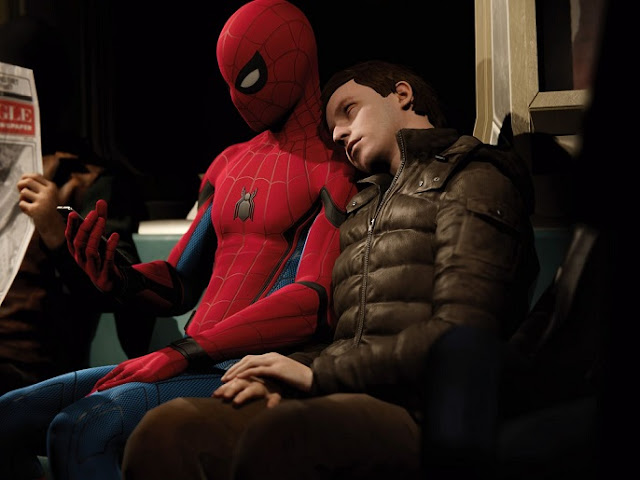 This picture seems to depict Spiderman on the subway looking at his cell phone, while his seatmate leans his head on his shoulder.  A romantic gesture.  Are we seeing a gay Spiderman and his boyfriend?

It's from a September 2018 article in Polygon magazine about the Spider-Man PS4 Video Game.  As Spidey goes about his adventuring, he gets phone calls from family and friends, but his voice sounds different depending on whether he's swinging or standing.  Voice artist Yuri Lowenthal recorded different versions of the same phrases to create the effect.

I don't know anything about video games, but I googled "Spider-Man PS4 Game": it advertises Spider-Man in an "all-new adventure"!  Here Peter Parker is an experienced crime-fighter, not a sallow youth, and the iconic characters have been "re-imagined." 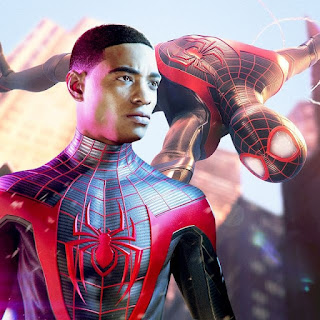 1. Mary-Jane and Peter have a romantic history, but are not dating.
2. Peter has a sidekick. fellow spder-person Miles Morales. He only appears briefly, in a back story.  But apparently neither has a heterosexual love interest, so they could be read as a gay couple.

You may recall Miles Morales from the gay-subtext film Into the Spider-Verse.  He stars in his own PS5 game, with no Peter Parker.  Apparently that game is gay-inclusive

But Spidey's seatmate is Yuri Lowenthal, not Mike Morales. 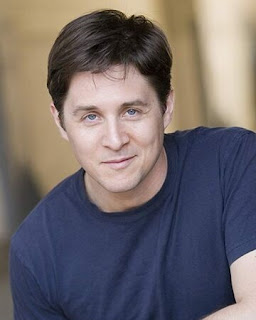 Yuri Lowenthal is a Jewish boy from Tennessee who majored in East Asian languages at the College of William and Mary.  He has voiced many characters in anime and American animation, such as Ben 10.   He's also written a book on voice acting.

As far as I can tell from his "wife and kids" bio, he's heterosexual. 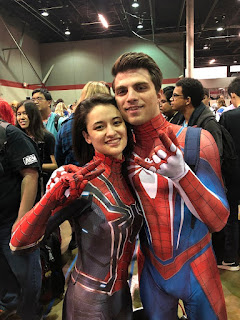 No beefcake photos on his Instagram, but here's a cute guy waiting to see him at a convention.

The word "gay" appears twice in Yuri's Twitter account: first he explains that a three-way involving two guys and a girl "isn't gay" (of course not: it would be bisexual for the guys).

Scond, he responds to an unknown comment by screenwriter Zack Stenz: "What's a gay."

So probably not an ally.

The intended meaning of the picture remains a mystery, but I'll take gay subtexts wherever I can find them, especially with iconic characters like Spider-Man.