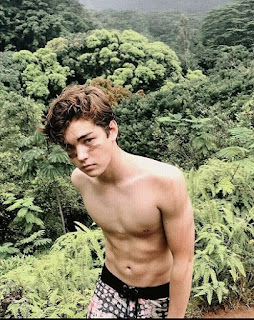 When I reviewed the first episode of the Disney Channel's Doogie Kamealoha, MD, about a teenage doctor in Hawaii, I noticed that Lahela's older brother Kai (Matt Sato, right) was not interested in girls.  He planned to go to the big school dance with his male friends "It's more fun that way."  Lahela's friend Steph kept throwing herself at him, but he rejected her.  So..was he being identifies as gay, or would he ignore Steph for two seasons, then fall in love with her, like Joannie and Chachi? 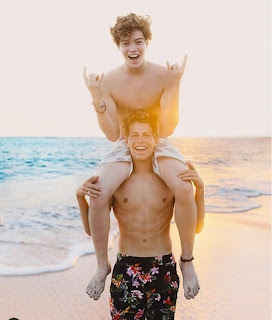 I'm six episodes in, just watching the Kai plotlines.  Steph has all but stopped throwing herself at Kai; they share a scene only in one episode.  And Kai still fails to express any heterosexual interest.  He does agree to go on a "group hang" to miniature golf with Steph, Lahela, and Lahela's boyfriend Walter, but interacts more with Walter than Steph.

Walter is rushed to the hospital for an emergency appendectomy, which Lahela performs.  Afterwards Walter ghosts her.  Concerned, Lahela asks Kai, "Have you talked to Walter?"  Kai: "Sure, we texted a couple of times today."

Kai never mentions anyone else, boy or girl.  His only interactions are with his family.  And not because, as a secondary character, he doesn't get much plot time: little brother Brian is constantly talking about girls and falling in love with girls.  The writers are making deliberate decisions to keep Kai from expressing heterosexual interest. Nor does his family ever mention the possibility of dating girls.  In Episode 6, Kai gets a job working on an organic farm, and announces that he loves it: he wants to skip college and become a farmer after graduation.  The standard sitcom response in this situation is: "What's her name?"  Teenage boys on sitcoms traditionally make every decision, from joining a club to deciding on a career, in order to meet girls or impress a girl.  But Kai's parents never ask that, and in fact the only other worker shown on the farm is an elderly man.  Subverting sitcom tradition so effectively requires a concerted effort.

The show's bible evidently contains the rule: "Kai is not interested in girls."  Of course, there's always the possibility of an Episode 8  meet-cute with "the girl of his dreams," but I'm becoming more and more confident that Kai will soon be added to the Disney Channel coterie of protagonists' gay brothers.

Update: In Episode 8, Kai falls in love with Steph.  Another gay subtext bites the dust.