"Doogie Kamealoha": A Fierce Doctor, a Gay Brother, and Lots of Hawaiian Hunks 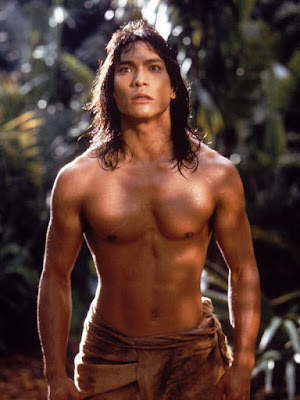 A show called Doogie Kamealoha, M.D. just dropped on the Disney Channel, an homage to the 1990s drama Doogie Howser, M.D.   Doctors were complaining about the ridiculous premise the first time.  No way a 16 year old will be admitted to medical school, let alone commence a career in medicine. I don't care how smart you are, you don't have the emotional maturity for the job.  Or the bedside manner.

But it's set in Hawaii, so maybe there will be some shirtless hunks.  I watched the first episode.

Scene 1: I was right.  On her sixteenth birthday, Doogie (real name Lahela) and her hot dad go surfing. Dad is iconic 1990s hunk Jason Scott Lee, still reeling in the years!  And we see a lot more of his body than hers. 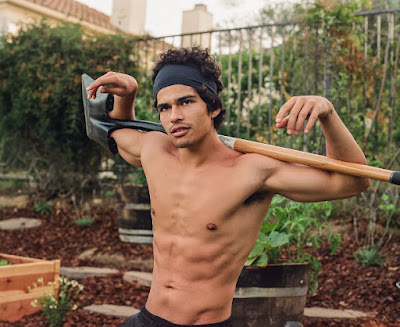 Scene 2: Doogie taking her driver's test, but driving so slowly that a speed walker passes them.   Helicopter parent Dad is in the back seat.

Suddenly they come to the scene of an accident.  Doogie rushes out, shows her credentials to the cops, and rotates the victim's broken leg so he doesn't lose it due to blocked circulation.  "Who is this kid?" the driving instructor asks.  "My daughter."  Apparently she graduated from med school at age 14, and has completed her residency.  Now for a 70-year long career in medicine.

Scene 3: At the hospital, Doogie and her fiercely feminine associate, Charles (Jeffrey Bowers-Chapman), negotiate a patient who disapproves of being diagnosed by a kid.  He threatens to sue, but she points out that there's no federal or state law requiring doctors to be of a certain age. 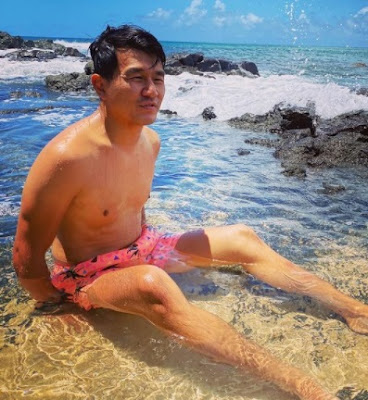 Scene 4: The boss, who is also Doogie's Mom (nepotism alert!) calls her out for...um, posting a risque dance on TikTok. Is she being a boss or a mom?  The hot Dr. Lee (Ronny Chieng) drops by to show his "Magic Mike moves"   (Lotsa Asian beefcake on this show).

Scene 5: Dad working at his Shave Ice and Lei Truck.  He explains that he gave up a high-pressure job in finance to "do what he loves," which is selling shave ice and flowers. I guess.  Mom drops by to talk to their other two kids: the "straight C' dreamy teen idol Kai and the "eats only pizza rolls" chubby kid Brian.

He discusses the first time he danced with a woman and "tried a few other things."  Inapprop, dude!  But Doogie decides that she needs "a night of firsts," too., like her first date, her first kiss, and her first...um, whatever.

Scene 7:  Doogie, hot Dr. Lee, and Boss Mom argue over the best course of action for treating the Hippie. 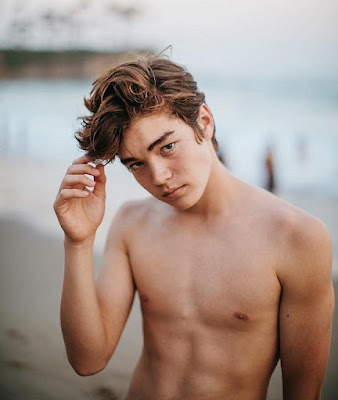 Scene 8: While dad cooks an octopus, Doogie talks to her podcast followers.  Her wacky best friend Stef leaps in through the window, and invites herself to dinner.

Doogie asks Mom for a later curfew for tomorrow night's dance, since they're all going to Zippy's (the iconic Hawaiian chain restaurant).  Mom refuses.  They argue, and Doogie storms off.

Meanwhile, Stef throws herself at dreamy Kai, who ignores her.

Stef: "Who are you taking to the school dance?" Flutter, flutter, hint, hint.

Kai: "I'm going with some male friends.  It's more fun that way."  I hear you, brother.  Who needs a girl messing things up?

Scene 9: At the Shave Ice and Lei Truck, feminine Charles, hot Dr. Lee, and some other doctors joke around.  Mom discusses the problems of being a boss and a mother at the same time (then maybe don't hire your daughter?). .

Scene 10: Walter from Scene 1 arrives to pick up Doogie for the dance.  Dad glares at him with distaste, but is mollified by a gift of Spam (you have to be from Hawaii to understand).  Walter's entire extended family arrives to meet his date and her family!

Steph talks her way into riding to the dance with Kai. She squeals "I got to apologize ahead of time for frontal grinding your brother."  Whew, this isn't your mother's Disney Channel!

Scene 11.  The dance.  Looks like all boy-girl couples.  Sreph keeps throwing herself at Kai, while he tries to ignore her and looks embarrassed.

Meanwhile, Doogie and Walter confess that this is their first date.  Really?  At age 16?   They start their first kiss, but then Doogie gets a text: she has to go to the hospital right away.

Scene 12:  Doogie rushes into the hospital, but it's too late.  Dr. Lee explains that the Hippie went into V-Fib Arrest. "We worked on him for an hour, but couldn't save him."  Did they call Doogie at the end of the hour, or did it take her an hour to get to the hospital?

Mom comes in and gives her a heart to heart about the first time she lost a patient: a family man who had been cooking dinner with his wife an hour before.  Dead husband instead of the cliche dead wife?

Montage of Doogie being depressed at breakfast and at the hospital, then getting comforted by her dad and Walter, while a sad song plays.  It keeps going on forever.

Gay Characters:  Charles is "openly gay," according actor Jeffrey Bowyer-Chapman, a former judge on Canada's Drag Race.  But being a minor character, I doubt that he will do any dating.

I'm not sure about Kai.  The utter lack of interest in girls (going to the dance with boys is "more fun") sounds indicative of gay identity, but more likely we have the standard sitcom trope of an unrequired love that turns requited in Season 3 (examples that come to mind: Joannie and Chachi on Happy Days, Niles and Daphne on Frasier,  Urkel and Laura on Family Matters, Thelma and the Reverend on Amen).

Kamealoha:  Interesting fusion of the two Hawaiian words that almost everyone knows: Kamehameha and "aloha"

Medicine:  I hate medical dramas.  I don't want to hear about blocked arteries and V-Fib Arrests for entertainment.

Will I Keep Watching: Not unless Kai turns out to be canonically gay.