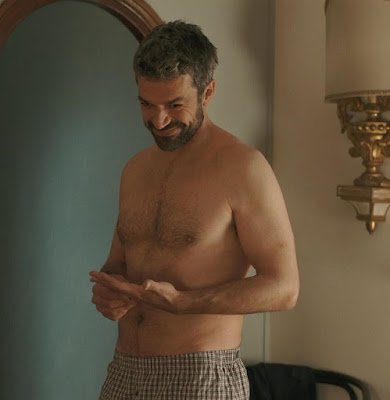 Why did the 2022 Italian tv series Le Fate Ignorante  ("the ignorant fairies" get translated into English as The Ignorant Angels?  Maybe because the term "fairy" is perjorative slang for gay men, and there are several gay characters?  The premise: after the death of her husband, Antonia discovers that her husband was having an affair with Michele.  They become close.  If they fall in love, I'm leaving. I reviewed Episode 1.

Scene 1:  Establishing shot of Rome.  Massimo (Luca Argentero) calls his wife and says he has something important to tell her, but it has to be in person.  He gets on his scooter and rides past the Coliseum.  He is distracted by "a beautiful woman" and crashes and dies. Then he tells us that "Death is a new beginning." 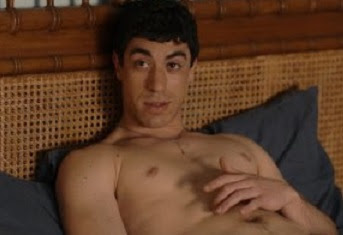 Scene 2: One year before.  Hunky Michele (Eduardo Scarpetta) climbs out of bed in his bohemian-squalor apartment.  The voice over tells us that this is the story of "two people who thought they had nothing in common, and later on find that they are very much alike."  It continues ad nauseam: Michele "can't imagine that he is soon to meet someone he'll become extremely attached to."

The voiceover continues, broadcasting the plot in infuriating detail, as we switch to Wife Antonia waking up Massimo (more beefcake!).  He pretends to be asleep, so she leaves, stopping to tell Nora the Maid to clean the outdoor decks.  We pan out -- there are 300 outdoor decks on the estate of this Richie Rich-style super-mansion!  Nora will be working for weeks!

Scene 3: Back in the bohemian squalor, Michele has a "he's a nice guy" conversation with his grandmother and her biddie friends.  He invites them to brunch on Sunday, but they refuse.  Then he goes to work: back stage at the opera, where apparently his job is painting sets.  He's currently working on a 40-foot backdrop of ballet dancers.

He invites all of his coworkers to brunch on Sunday,. Sandro (Samuel Garofalo) glares at him: this will become important later.  Then he and the elderly Atillo tell each other things that they already know, like "I was your mentor when you first started out in backdrop-painting."

Switch to Wife Antonia, who works as a doctor.  As Mrs. Richie Rich,  you'd think she'd spend her time shopping, doing lunch, and planning charity benefits.   Her regular patient asks her out, but she refuses, as she's married.  "Well, bring him along."

Scene 4:  At home, Wife Antonia's Mom criticizes her for being boring, "not interested in life," "anti-social.  You don't do anything.  You're not living."  Um...she's got a career?  Mom then criticizes Nora the Maid for dating a guy from Ghana -- his penis will be too big for her.  Gee, that's a selling point in gay communities.

Scene 5: Lots of young, attractive people, both boys and girls, helping Hunky Michele prepare Sunday brunch.  With lasagne?  Everyone wants to hear the Big News:  he's in love with Massimo, whom he met at the bookstore!  "We were both looking for the same book, a wonderful book of poetry by Nazim Hikmet." (A famous Turkish writer who died in 1963).  Hunky Michele got the last copy, so he offered to photocopy the poems he wanted and then give the book to Massimo -- a clever way to see him again!  Wait -- you didn't even make a date? 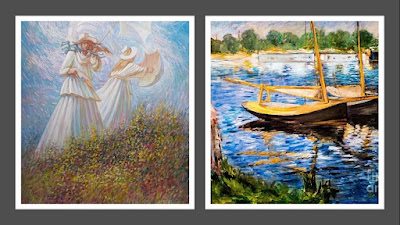 Scene 6:   Massimo gives his Wife Antonia a book -- not the Hikmet, a book on Manet. I don't understand. What was the point of the Hikmet?  She's a bit disappointed; she's actually a fan of Monet, not Manet. What's the difference?  Two French impressionist painters.

Meanwhile Sandro is storming out of the brunch because he can't stand Hunky Michele's story.  They've never dated; it's just an unerequited crush, but still....  Then Massimo shows up with a bottle of wine.  But Michele just told them the story of their meeting at the bookstore, and bragged that he strategized a way to see him again...has there been a time jump? 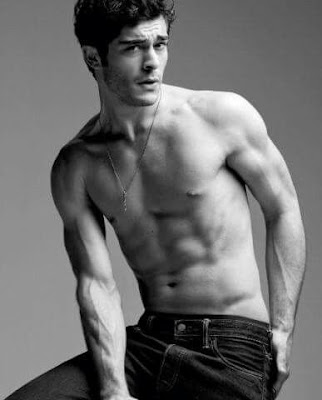 Inside the bohemina-squalor apartment, Michele and Massimo discuss how much they love each other.  They kiss once (no fair!  Antonia got ten minutes of kissing!)  Then they go out to brunch, where Massimo is introduced to the gang: two straight women,  a lesbian couple, a gay couple (one may be Burak Deniz, left), Atilla his art mentor, and his grandmother.

Grandma explains that they aren't nine individuals: they are a single entity, a single mind, a shared soul.  This seems a little extreme for a group of friends.   But not to worry, they are happy to absorb Massimo into the group consciousness.  "We accept him!  We accept him!" Instead of running away screaming, Massimo is touched.

Scene 7: After sex, Michele (still naked on the bed) and Massimo (getting dressed).  Michele gives him a house key.  Then Massimo goes home and spends 10 minutes of screen time having sex with Wife Antonia (no fair!).  Afterwards they cuddle.

Scene 8:  Wife Antonia's Mom suggests that Massimo is away so much because he's having an affair with a woman.  Antonia dismisses the idea, but Mom continues: All Italian men have affairs, so why should Massimo be any different?  There's nothing wrong with it.  You're still the wife; she's just the side action.

Scene 9: Hunky Michele's group mind is having the same idea: Massimo comes over only during the daytime, never at night.  You always stay in the apartment; you never go out.  Obviously he has a boyfriend.  Michele dismisses the idea, but the group mind continues: All Italian men have affairs, so why should Massimo be any different?  There's nothing wrong with it.  Being the side action is great, all of the fun and none of the work of a relationship.

Scene 9:  The group mind gives Massimo a cake and sings "Happy Birthday."  Then jealous Sandro has a big reveal: he's been snooping around, and discovered that Massimo doesn't have a boyfriend, he has a wife!  Hunky Michele angrily excommunicates him; he skulks away.  The group mind doesn't care: gay , straight, bisexual, whatever, side action is side action.  Michele isn't so sure, but he goes along with the groupthink.

Scene 10: Massimo suggests leaving his wife to be with Michele full-time.  Michele hates the idea: he likes being the side action.  They argue; maybe they break up.  Massimo storms out.  He makes The Call from Scene 1 anyway.  If he's broken up with Michele, why bother?  Is he going to tell Wife Antonia that he's coming out as gay?  We'll never know, because he gets onto his scooter, gets distracted by a beautiful woman, and crashes.  The end.

Beefcake: Both Massimo and Michele take their clothes off.

Other Sights: Streets of Rome.

Gay Characters:  Most of the group mind.

Heteosexism:  We see lots of Massimo kissing and having sex with Antonia.  Massimo and Michele kiss once, and have sex only off camera.

My Grade:  I don't like any of these people, especially the annoying Michele.  And I don't understand his motive: he's ok but not ok with being the side action, but when Massimo decides to leave his wife for him, he has a fit.  At least, according to the plot synopses, Michele never hooks up with the Wife.  She joins the group mind and begins dating someone else.  C