Out Our Way: Teenagers Before Girl-Craziness 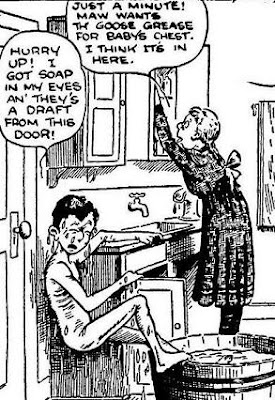 When I was a kid in the 1960s, I was jealous of the comics they got across the river in Davenport, Iowa.  They got Peanuts, we got Winthrop.  They got The Wizard of Id, we got Apartment 3-G.  I sort of liked Alley Oop and Prince Valiant, but what was up with the single-panel strip, Out Our Way?

They spoke in nearly incomprehensible slang and had bizarre customs. There was an "ice box" instead of a refrigerator, a gigantic radio instead of a tv.  They bathed in a tub in the kitchen. 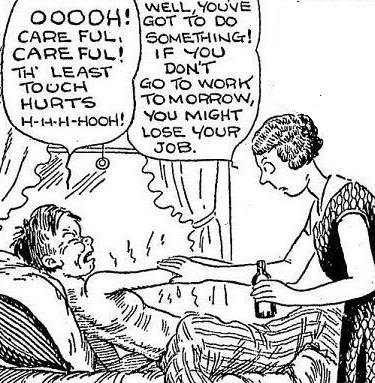 The older son had a job, though he looked barely fifteen.

Confused, repelled, yet fascinated, I tried to decipher the strips day after day, week after week.  The world they portrayed was vastly different from the world I knew. 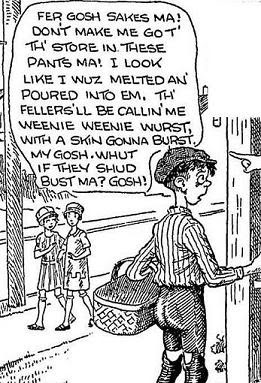 Boys in my world were always fully clothed, except in locker rooms, but in Out Our Way, they stripped down for baths and for bed and to swim.  They were naked in front of each other!  They displayed a remarkable physicality, an awareness of the way their bodies looked and felt and moved.

Boys in my world did not touch each other, except during sports matches and fights. We were expected to find physical contact abhorrent.  But in Out Our Way, boys un-selfconsciously pressed against each other, draped their legs over each other's bodies, hugged, slept in the same bed 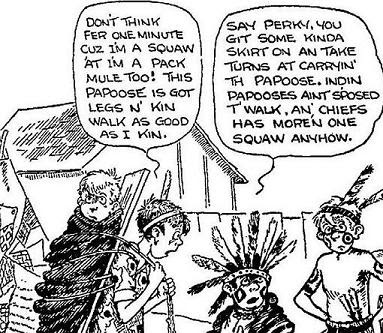 In my world, every trait, interest, and concern was gender-polarized.  Boys carried their books at their waist, girls across their chest.  Boys said "p.e." but "gym class," and girls "gym" but "p.e. class."  And the punishment for transgression was severe. But in Our Our Way, boys un-selfconsciously wore dresses.  The teenager performed "women's work," cooked (in an apron), cleaned, tended to his young brother. 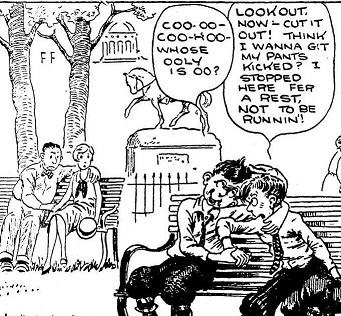 Boys in my world were expected to groan with longing over the girls who walked in slow-motion across the schoolyard, their long hair blowing in the wind. They were expected to evaluate the hotness of actresses on tv, discuss breasts and bras, and claim innumerable sexual conquests.  But boys in Out Our Way never displayed the slightest heterosexual interest.  Instead, they consistently mocked the silliness of heterosexual romance.

What sort of world was this?

Many years later, I found that the comics I read in the 1960s were reruns from the 1930s and 1940s,  and even then, many had been nostalgic, evoking the author J.R. Williams' childhood at the turn of the century.

I was gazing into a time capsule, into a era when heterosexual desire was expected to appear at the end of adolescence, not at the beginning, so teenage boys were free from the "What girl do you like?" chant.