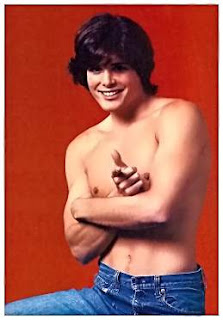 In 1982, I got my B.A. in English and Modern Languages and moved to Bloomington, Indiana, to study for a M.A. in English.  I wasn't planning on an academic career; I thought the M.A. would assist me in reaching my career goal in publishing.

I was taking courses in Old English, Victorian Literature, Fiction Writing, and for some reason Chinese, working in the dormitory cafeteria, listening for gay subtext songs on the radio, and reading the Gayellow Pages, so I didn't have much time for tv.    In 1982-83, I watched a few old-standby sitcoms: The Jeffersons, One Day at a Time, Alice, Taxi -- plus The Powers of Matthew Star (with Peter Barton, left) and Madame's Place (1982-83). 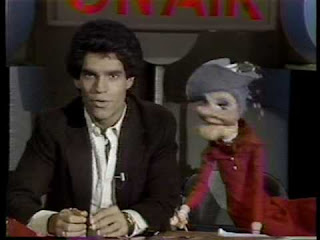 Gay actor and puppeteer Wayland Flowers (1939-1988) began voicing Madame in the 1970s.  She was a new twist on the drag queen persona, an elderly former movie star who had a potty mouth and told outrageous stories about her exploits with men.

Baby Boomers used to thinking of the older generation as skittish, easily-scandalized, and sexually repressed found Madame's bawdy humor mesmerizing, and soon she became the most famous puppet since Charlie McCarthy. 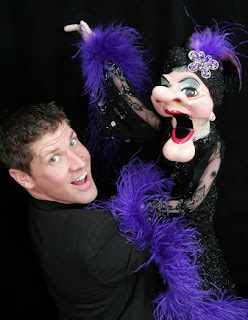 Wayland and Madame were everywhere in the 1970s and early 1980s, on  Andy Williams, Merv Griffith, The New Laugh-In, The Chuck Barris Rah-Rah Show, Playboy's Roller Disco and Pajama Party, and Solid Gold.  They hosted the 1982 Macy's Thanksgiving Day Parade.  They were regulars on the Hollywood Squares game show. 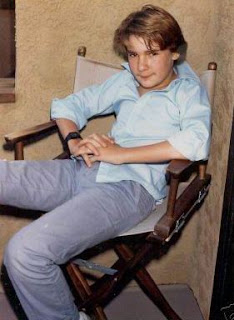 A tv series was inevitable, a throwback to the old "celebrity home life" sitcoms of the 1950s, with Madame as a talk show host asking inappropriate questions of real celebrities like William Shatner and Peewee Herman.  At home, she interacted with her butler (Johnny Haymer), uptight assistant (Susan Tolsky), dumb-blond niece (Judy Lander), and kid next door (Corey Feldman, left).

There were no references to gay people, but it was easy to imagine Madame as an aging drag queen.  In fact, it was expected.

It's not on DVD, but you can see clips on youtube.

Wayland never actually came out, for fear that a public statement would end his career. 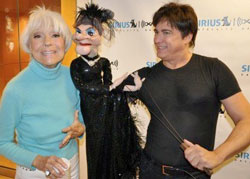 He died in 1988, but Madame has recently begun a new act with drag entertainer and Liza-specialist Rick Skye (who is out).