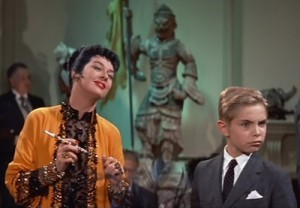 Auntie Mame was one of the best sellers of 1955, about the irrepressible, exuberant, bon vivant Mame who must raise her young nephew Patrick during the Depression and World War II, and in spite of the turmoil in the world, vows to introduce him to all that life has to offer.  And it offers quite a lot: art, literature, music, eastern mysticism, existential philosophy, and gay people. 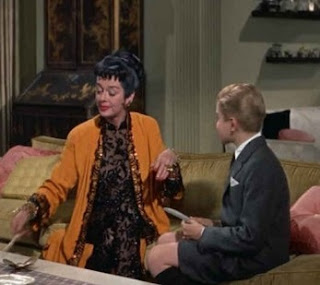 The novel is loaded down with casual gay references; there are transvestites at a party; Patrick overhears the word "lesbian"; Mame reads Andre Gide's gay classic The Counterfeiters, and receives "intimate letters" from lesbian poet Sarah Teasdale. 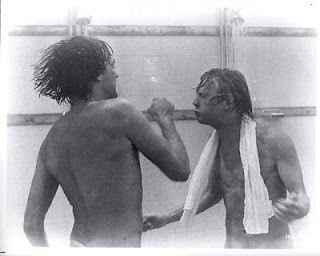 Mame may like transvestites and lesbians, but she rather dislikes gay men.  She throws the word "faggot" around a few times, and is relieved to discover that Patrick isn't "that way."  In the sequel, Around the World with Auntie Mame (1958), she cautions Patrick's young son to avoid "men who kiss each other too much," since they might be....you know.

But the author (nom de plume Patrick Davis) rather liked men: he describes male bodies in ecstatic detail, rhapsodizing over handsome faces, muscular chests and well-turned thighs.  With women, he describes the clothes. 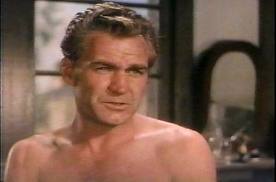 Unfortunately, the beefcake does not translate to the screne (although Forrest Tucker was rumored to have the largest penis in Hollywood), and the gay references were deleted, leaving only a lesbian subtext in Mame's friendship with hammy actress Vera Charles.

But the absence of gay reference means the absence of Mame's homophobia, making her seem not only tolerant but expansive, celebrating difference and diversity.  The movie Mame would not only hang out with gay men, she would joyfully host gay weddings.  And if little Patrick told her that he was gay, she would plan a fabulously expensive "coming out" party to introduce him to the sons of her celebrity friends.

Paradoxically, censoring the gay content made the movie more gay-positive than the book.
Posted by Boomer