Searching for the Gay Characters on "On My Block" 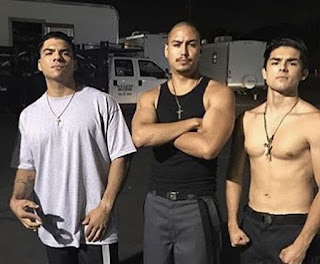 Netflix keeps pressuring me to watch On My Block, about four high school friends in a Hispanic neighborhood in Los Angeles.

"You like quirky comedies with gay characters, right? Then watch On My Block."
"You watched Special, right?  Then you'll love On My Block!"
"All of the cool kids are watching it.  You want to fit in, don't you?"
"If you don't watch it, we'll raise your rates."

Surely there must be some gay characters for Netflix to be pushing it so aggressively.  But, I recall, Netflix also pushes endless dramas with descriptions beginning "After the death of his wife....", so I'm wary.

I watched one episode, entitled "Chapter Fourteen," about the Valentine's Dance.  If there are any gay characters, they'll certainly be out here. 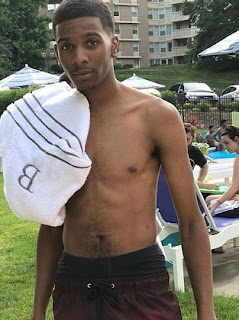 1. His older friend Cesar (Diego Tinoco) has just become homeless, so Jamal (Brett Gray, left) takes him in.  They share a bed, which results in a humorous montage of problems: snoring, feet in face, and so on.

No gay subtext here, but at least the two aren't homophobic.

Later Cesar is trying to make out with his girlfriend, but they have problems meeting all of Jamal's rules, like "you can't wear outside clothes on the bed, too many germs." 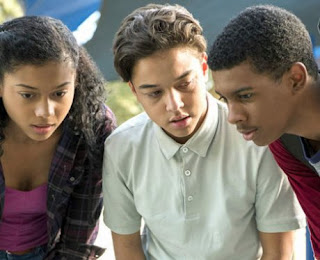 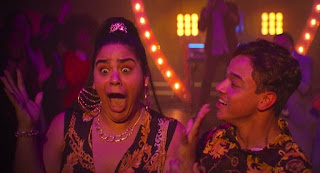 3. A big,boisterous, lesbian-coded girl  appears and tells Ruby that she has some potential dates lined up.

Oh boy, a whole roomful of cute guys for Ruby to choose from.

Except it's a roomful of girls.

Ok, is Big Girl unaware that Ruby is gay, or are same-sex dates not allowed?

Ruby rejects all of them.  He would like to have sex with the girls, he explains, but in order to win the dance contest, he wants to go with Big Girl

Foul!  Ruby is straight!  Big Girl might still be a lesbian, though.

4. Jamal is watching football practice, when the Coach appears and says "I need you tomorrow night."

"Are you asking me to the dance?" Jamal asks.

No, the Coach wants him to work off his debt by chaperoning.  Jamal doesn't have a date, so why not?

No date, awareness of same-sex relationships, no outrage over the possibility that a guy might be asking him out -- .Jamal must be gay! 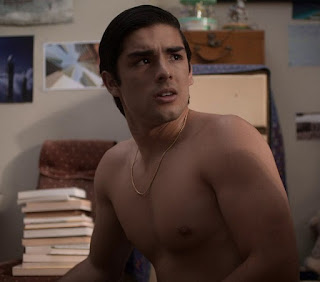 5. Monse's Mom, who is white, shows up and wants to take her away to Brentwood because South Central L.A. is too dangerous.

6. Monse and her boyfriend, who looks like Cesar, discuss what to wear to the dance.

Lots of male bonding on this show,but does it always have to be adult-teen, thus precluding gay subtexts?

9. The Dance. One of the dance contest pairs is Javi and Javier, but I don't think they're a gay couple, since one grimaces when the other kisses his cheek.  We don't actually see their dance.

10.  Jamal accidentally breaks the Coach's cell phone.  Then he runs into Tyrone in the hallway and hugs him.

Wait -- he's hugging a guy?  Definitely gay.  Even if the hug is just an excuse to plant the phone on Tyrone, so he'll be blamed for stealing and breaking it.

11. Ruby has a flashback to when he was shot at another party.  Everyone is upset.  Monse says "One day the world's a dream, the next day it's a nightmare.  I can't believe she's gone."  Cesar is crying.  Jamal hugs him.

Wow, bummer.  This is definitely not a comedy, it's a drama with jokes.

So, is Jamal gay for real?  According to fan wiki, he's never been in a relationship.   In an interview, Brett Gray states that he hopes Jamal finds a special someone this season.