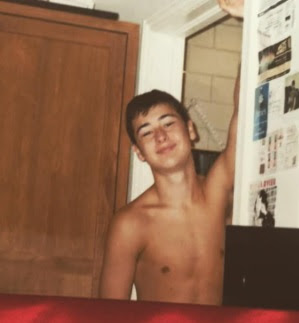 Bob always chooses the movie for Friday Movie Night, and it's almost always post-apocalyptic, garbled sci-fi, or Marvel Comics Universe.  But last night, he chose a musical: Everybody's Talking About Jamie on Amazon Prime.
Newcomer Max Harwood plays Jamie New (great name!), a 16-year old gay boy in Sheffield, England who dreams of becoming a drag queen because performing in drag always means instant fame and fortune.  (Um...no.  Most drag queens perform as a hobby; only a few make a living from it). 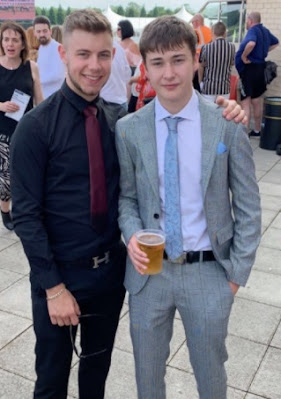 He has the full support of most students, including his best friend Priti (the only Muslim girl in school), plus his Mom and her best friend, a woman named Ray.
His only detractors are a group of homophobic, Islamophobic bullies led by the boorish Dean Paxton (Sam Bottomley, top photo and right, who is 20 years old and a gay and Muslim ally in real life).
Plus the Career Education Teacher, Miss Hedge, who claims that she's opposed to drag because it won't lead to a successful career, but actually just disapproves of feminine boys. 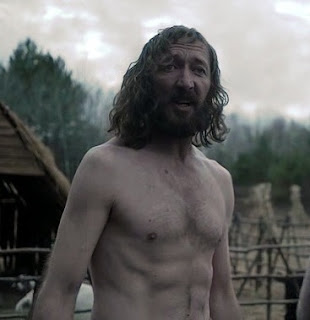 Also, in a subplot, Jamie's father (Ralph Ineson, but without the scraggly hair and muscular chest) wants nothing to do with him, but Jamie's Mom has been sending him cards and presents under Dad's name.  When the deceit comes out, Jamie has a meltdown and angrily breaks up with his Mom (yes, they have a quasi-romantic relationship, most evident when Mom sings about a "lost love" who broke her heart when he left, and she means Jamie: "my man...my son...my man!").
Turns out that Jamie was traumatized early in childhood, when Dad caught him trying on makeup and called him "disgusting," "a freak," and so on.  Ever after, he's considered himself "nothing," and he thinks that becoming a drag queen will make him "somebody." 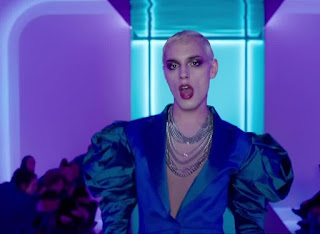 Seeking out a dress, Jamie goes to a drag shop in Sheffield (Sheffield, England has drag shops?), where he meets Hugo, aka legendary drag queen Loco Chanelle (Richard E. Grant, who is not a drag queen in real life, but he has starred in Twelfth Night, My Fair Lady, Doctor Who, and some Marvel Comic Universe movies).  Hugo demonstrates that drag is not about being famous, it's about fighting homophobic oppression.  With his mentoring, Jamie performs as Mimi Me at the local drag club (yep, Sheffield has drag clubs, too), and gets a standing ovation.
Now all that remains is to go to the prom in a dress.  Miss Hedge, who apparently has full power to dictate proper prom attire, absolutely forbids it, but gives in when the students rebel en masse.  Even the bully Dean Paxton promises to be nice "just for one night," and he and Jamie go into the prom hand-in-hand.
Beefcake: None.
Gay Characters:  Jamie and the drag queens, presumably, although here "gay" really means feminine.  Jamie never expresses any same-sex interest.
Heterosexism:  None.  No one but Ray expresses any heterosexual interest, unless you count Jamie's Mom being in love with "my man."
Implausibility:  A drag store and a drag club in Sheffield, but no other gay kids at Jamie's school.  Are 16-year olds admitted to bars in England?
Soundtrack:  Some of the songs are annoyingly repetitious.
My Grade: B.
Posted by Boomer