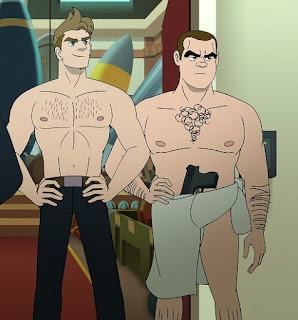 I heard that Q-Force, the new animated series on Netflix, was horribly homophobic, brashly portraying screaming-queen stereotypes from 50 years ago, girlfriend.  One would expect blatant homophobia in a series produced by the Devil...um, I mean Sean Hayes, the Uncle Tom who set gay rights back 50 years with his screaming-queen stereotype Jack on Will and Grace.  I wanted to review an episode to complain about how homophobic it was, but I had to wait until I was in a very good mood.  I'm in a good mood today. 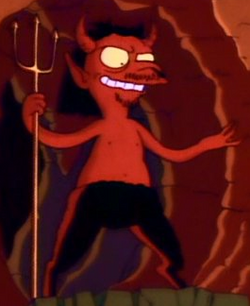 Switch to the secret agent graduation ceremony.  Limp-Wristed Muscle Guy, Steve Maryweather (the Devil...um. I mean Sean Hayes), is the valedictorian.  He comes out during his speech ("I want to thank the Marky Mark videos for making me gay." ) I hate it when people say that seeing a hot guy turned them gay.  It feeds into the homophobic belief that we all start out straight, and then something goes wrong. And, of course, if you turned gay, you can turn "back to straight" through conversion therapy.
Everyone recoils in disgust at the gayness revelation, and the headmaster quickly names the straight guy Buck (David Harbour) valedictorian.  "Agent Mary" was expecting a plum assignment tracking down terrorists or drug lords, but because he is gay, he is assigned to the backwater agency branch in West Hollywood.

Why ON EARTH would anyone name a character Agent Mary, evoking an ancient slur that makes older gay men cringe?

Scene 2:  2021, 10 years later. Agent Mary gets up and exercises, while listening to news stories about all the terrorist activity he could be fighting.  Agent Buck calls to be homophobic.  After 10 years?  Why do you keep harassing the poor guy?

Agent Mary goes to work at the West Hollywood Agency, which is staffed by a team of homophobic stereotypes: two butch lesbians and a drag queen.  Role call: butch bodybuilder Agent Deb has designed a flying car; dour Agent Stat has located the Malaysian airplane that went missing several years ago; and drag queen Twink shows off his new "old lady" disguse.

In spite of all their expertise, they never get a case, so they all go home, depressed. Agent Deb is quitting the agency to work at Pep Boys.

Scene 3: Agent Mary in his underwear, preening before a mirror. He finds a gray hair!  Ahh, he's old, and he hasn't saved the world yet!  He calls the Deputy Director and asks for a case, but she says that she's powerless.

A humorous scene with Agent Mary and the naked male-female couple who are staying at his Air B&B.  He maintains his cover by pretending to be an interior designer, but he complains about the homophobia that has kept him from getting...um...an interior design job for ten years.  "Is there a lot of anti-LGBTQ prejudice in the world of West Hollywood interior design?"

The agents decide to go rogue and find their own cases.  Agent Twink reveals that last night, during her drag act, she met a guy with a briefcase chained to his wrist and a Kazakh tattoo that said "Anarchy will grow from the blood of the uninitiated."   Sounds suspicious! They look up his profile on Grindr. 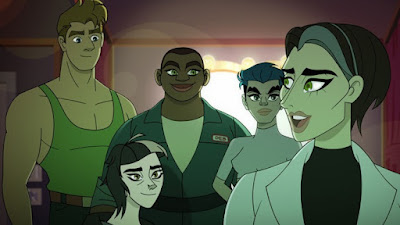 Scene 4:  The Director (Gary Cole) calls Deputy Director V to berate her for assigning a case to Q-Force.  She has no idea what he is talking about. "I told Agent Mary that there were no cases available."  "Well, the queers are in the field! They'll screw everything up with all their swishiness!  Fix this!"  She groans and jumps into her helicopter.

Scene 5:  Agent Stat hacks into Kazakh Guy's phone, and read two texts: a church emoji and the sign for Robertson Boulevard.  It's not hard to figute it out: he's going to the Abbey, an iconic gay bar! 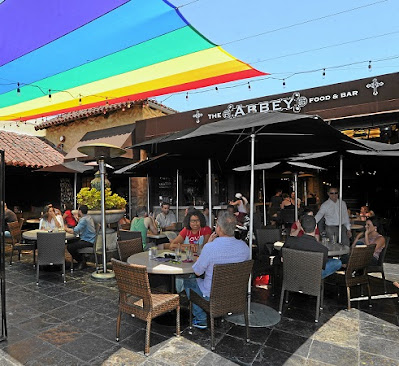 Scene 6: At the Abbey.  Lots of underwear guys on poles and screaming queens drinking cocktails.  As far as I know, the Abbey never had underwear dancers.  It is an upscale place for the A-Gays.

Agent Mary flirts with Kazakh Guy to put a tracker on him.  The Kazakh dialogue is sort of funny.  But this prove unnecessary, as they can see Kazakh Guy getting a zip drive from one of the screaming queens.

Twink, disguised as Ariana Grande, distracts the crowd while Agent Mary intercepts the zip drive.  They fight; Kazakh Guy gets his zip drive back and escapes.

Scene 7: They jump in their flying car and chase him down San Vicente (sigh -- a memory of home!).  After another fight, they capture Kazakh Guy and bring him back to headquarters -- where Deputy Director V is waiting!  She fires them.

But Agent Stat has deciphered the zip drive: a lot of top-secret nuclear stuff, delivered by a guy who is an intern at the Senate. The Q-Force has uncovered a nuclear weapon deal with ties to the federal governemnt!  Deputy Director V re-hires them.

She gets the Director to ok the re-hire by saying: "You hate women in power, right> If they screw up, you can fire me."

Scene 8:  Agent Mary gets up, exercises, and goes to work at their new headquarters, disguised as an office in the Pacific Design Center.  He flirts with the bear from the office next door, Benji, who will apparently become a regular character (Good grief, even bears have limp wrists!).

Nice new high-tech office.  Ulp -- but their new boss is Agent Buck, assigned to "go babysit the sodomites."  Very odd slur.  There no indication that Agent Biuck is religious.  How would he even know it?

My Grade:  The story was actually not bad, and I liked the references to West Hollywood.  But every single gay man, except for Kazkah Guy, is a limp-wristed, "oh, Mary" queen.  Surely at some point in his life, Uncle Tom Sean Hayes has met a gay man who doesn't swish?  Presumably all lesbians are grunting, beer-guzzling butch stereotypes, but we don't see any except for the two Q-Force members.

It would get a D, except that anything with Sean Hayes in it makes me physically ill, so F.