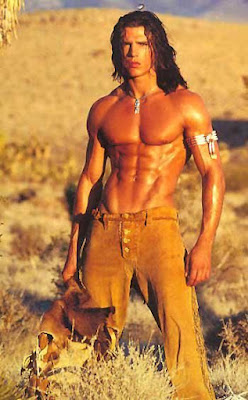 Someone recommended Reservation Dogs, on Hulu.  I doiubt that there will be any gay characters, but I wouldn't mind seeing some Native American beefcake.

Scene 1: In Indian Country, Oklahoma, some Native  teenagers steal a truck hauling Flaming Flamers Potato Chip (flaming flamers? Gay reference?).  They drive it to a salvage yard overrun by "meth head zombies."  Kenny is waiting for them.  The leader  and a girl discuss what to do if things go bad: "I'll kick him in the nuts, and you grab anything nearby and throw it at him." 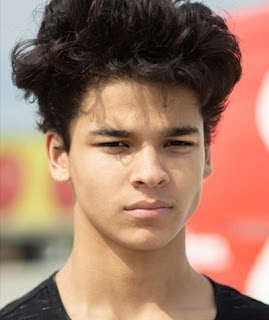 While Bear (D'Pharaoh Woon A Tai, left), Willie Jack, and Elora negotiate the payment for the truck heist (and ask to keep the chips), the remaining boy, Cheese (Lane Factor), introduces himself to a meth head, and gives his pronouns.

Scene 2: Carrying big boxes of chips.  Later, in class, Bear shows a video he made introducing the gang and their delinquent activity.  The teacher nervously cuts him off.

Scene 3: They're selling the bags of potato chips at 50 cents each.  Various colorful characters drop by.  A gang of three is watching them from across the street.  They decide to alert Whtie Dave.

Scene 4: Bear sneaks some of the money they made into his mother's purse (aww, the delinquent is helping out).  Mom is going out to night to find him a new Dad, someone better than that "low-down out-of-work Indian rapper." (Foreshadowing?) 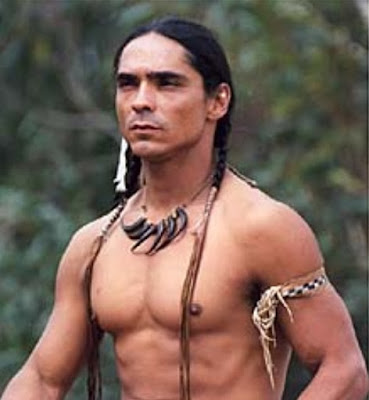 Scene 5: Back at the chip stand.  The tribal cop Big (Zahn McClarnon, left) drives up to interrogate them: "A chip truck was stolen earlier today, and last week we had two cars stolen, and someone pulled the copper out of 20 street lamps and stole the steaks from Patterson's Grocery."

Flashback to Bear's gang doing all that, plus stealing marijuana edibles and spray-painting pictures of penises and boobs.  Very busy gang!

There's also been a sighting of Deer Lady, a spirit of some sort.

Scene 6:  On their way to eat some catfish. Uh-oh, the gang from Scene 3 drives up and shoots then all!

While "dead," Bear has a vision: An old-style Indian warrior rides up.  "You've had a taste of the white man's lead."  "It's just paintball."

Turns out that he's no one famous, just an "unknown warrior" who fought at the Battle of Little Big Horn.  Well, actually, he didn't fight, he got squashed by his horse.   Anyway, he has a message: "You and your thug-ass friends aren't helping our community.  Find something to fight for." 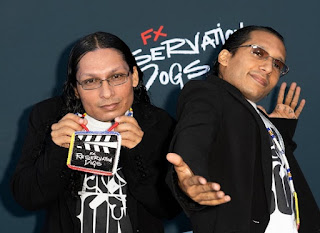 Scene 7:  They recover from the paintball attack.  Two rappers, Mose and Mekko (Lil Mike, Funny Bone), approach to tell them that it's a new gang run by a girl named Jackie.  They heard that Bear's gang ruled the rez, so they plan to take them out.

Scene 8: Rob n Cleo's Market to get the catfish.  Uh-oh, Miles, whom they stole the truck from, comes in.  They overhear him complaining about being fired.  Then his wife left hm, and took all the money, so he's bankrupt, so he had to eat sugar, and now he has diabetes.  That's a lot to happen since this morning.

Scene 9: Back at the hideout, Bear feels guilty, and wants to give the money back.  "Fuck that shit.  We got that money fair and square."  They argue.  They talk about Daniel, who died last year.  "This place killed him!  I'm not letting it kill me!" Elora storms out. 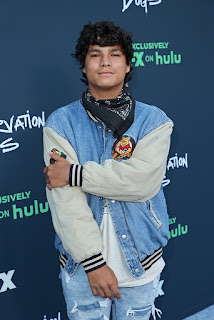 Scene 10: Elora looking at a picture of Daniel (Dalton Cramer, left).  Meanwhile, Bear is on the way home, when he sees Daniel watching him.

Scene 11: Morning.  Elora stops by with meat pies.  She's ok with buying the truck back from the meth heads and returning it to Miles.

Scene 12: At the chop shop.  The truck has been stripped, but the meth heads give them what's left of it.  Not much.

Scene 13:  Daniel's memorial service.  The gang in suits, rubbing smoke on their faces.  They hug and say "Love you, bitch."

Jackie's gang drives by and threatens them again.  The end. 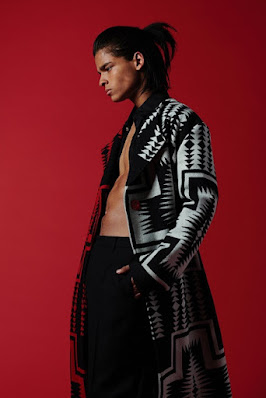 Beefcake:  Bear climbs out of bed in his underwear.  Daniel is rather attractive, but as a ghost he won't appear much.

Heterosexism: No one expresses any heterosexual interest, at least not in the first episode.

D'Pharaoh doesn't reveal much about his personal life.  We know only that he's from Toronto, he's proud of his indigenous roots, and he's a fashion maven.  Maybe he's gay, too.