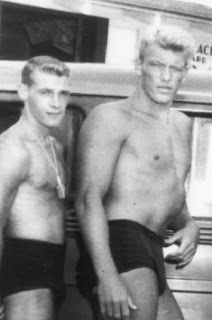 The 1950s was obsessed with marriage and reproduction. Movies, tv programs, presidential speeches, school textbooks, and Sunday morning sermons all pushed the heterosexual nuclear family with salary-man dad and cake-baking mom as the pinnacle of societal perfection, not only the way everyone should live but the way everyone did live (In the U.S., anyway).  But there were critiques, carefully-worded inquiries about whether everyone in every nuclear family was by definition deliriously happy, and every single person by definition miserable. 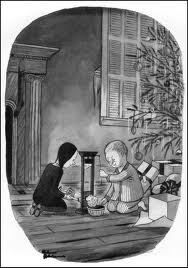 Cartoonist Charles Addams offered one of the most popular critiques.  He began publishing macabre cartoons in The New Yorker in the 1930s.  By the late 1940s, most were gently skewing the nuclear family experience.

On Christmas morning, two kids play gleefully with a guillotine.  Or they start a fire in the fireplace in anticipation of Santa Claus's visit.

A boy brings models his scout uniform, while his disgusted parents look on.  "He certainly doesn't take after my family," the mother exclaims. 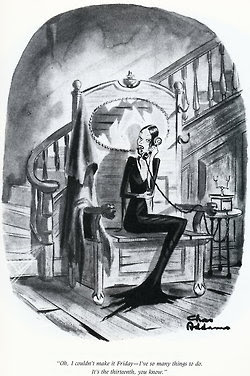 A woman dressed in a black shroud dissects the mania for civic holidays: "I couldn't make it Friday -- I've so many things to do.  It's the thirteenth, you know."

Addams never intended for his unnamed characters to be taken as a single macabre family, but they appeared together so often, and in so many different contexts, that readers assumed that they were related.  Eventually he gave in and called them the Addams Family. 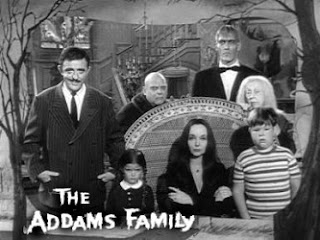 During the monster mania of the early 1960s, they spun off into a tv series, The Addams Family (1964-66).  Now they had names: Gomez (John Astin), Morticia (Caroline Jones), their children Wednesday and Pugsley, Uncle Fester, Grandmama, their butler Lurch, and "It," a sentient hand. They were not quite as homicidal as their counterparts in the New Yorker cartoons; indeed, many episodes involved them helping neighbors, friends, or strangers with their personal problems. They were as close-knit and supportive, and as aggressive in promoting heterosexual romance, as any sitcom family of the 1960s.  But still, they constantly blurred the boundaries between "normal" and "abnormal," making them a favorite of gay kids who felt "different."

By the way, if you remember the series, you might be interested in seeing Ted Cassidy, who played the Frankenstein-like butler Lurch, in a swimsuit (top photo).  Apparently he was quite a hunk.