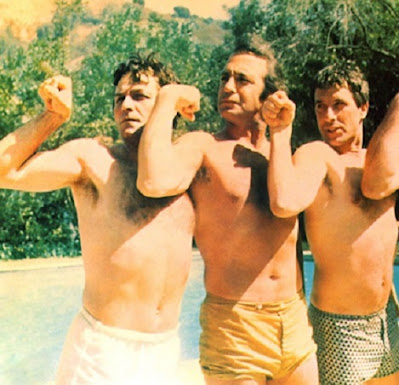 I never watched Columbo, or as we called it, Clod-Dumb-bo, when it first aired in the 1970s.  It was on Sunday nights, when I was usually in church or, later in the decade, watching hip sitcoms (All in the Family, Alice, Rhoda, One Day at a Time).  Besides, I wasn't interested in detective shows, and it wasn't even a show, it was a series of movies -- The NBC Mystery Movie, airing every three weeks, alternating with the cases of a cowboy detective (McCloud, aka McClod) and a sleuthing housewife (McMillan and Wife).

But with only three channels, everyone in the 1970s knew everything about every show: we see the murderer's intricate scheme carried out in the first scene.  The clever murderer thinks that they've gotten away with it.  Then  Colombo (Peter Falk, far left, during his his muscular youth), disheveled, crumpled, and absent-minded, ruminating over tiny inconsistencies in the story: "There's just one thing that bothers me. Why were all the lights off in the apartment?  I go out for the evening, I leave a light on."

Recently Columbo has appeared on Amazon Prime -- all upteen cajillion episodes.  Bob and I have watched the first two, actually pilots: 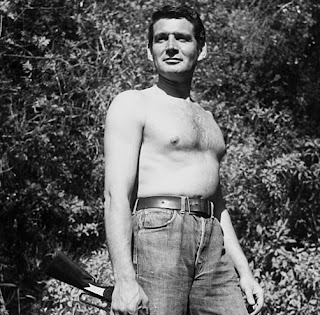 Prescription Murder (1968): Extremely wealthy psychiatrist Dr. Fleming (1970s staple Gene Barry) comes up with an intricate plot to murder his wife and blame it on a burglar: he was on vacation in Mexico at the time!  Columbo wonders why he didn't say "Honey, I'm home" when he came into the apartment, and why his luggage on the way to Mexico was 13 pounds heavier than on the way home.

Ransom for a Dead Man (1971): Extremely wealthy attorney Leslie Williams (1970s staple Lee Grant) comes up with an intricate plot to murder her husband Paul (Harlan Warde)  and blame it on kidnappers. Columbo wonders why, when Paul called from the kidnappers' lair, Leslie didn't ask "Are you ok?"  And why he was standing up while the murderer was sitting  -- that doesn't make sense for a kidnapper. 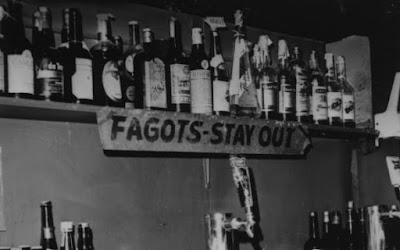 This one makes Leslie an amateur pilot, so she takes Columbo on a flight across the nearly empty San Gabriel Valley.  Plus there's a scene set in Barney's Beanery, the West Hollywood eatery with the infamous "Fagots Stay Out" sign that caused gay rights activists like Troy Perry and Morris Kight to protest in the 1960s and 1970s. The sign didn't come down until 1985, when the City of West Hollywood adopted an anti-discrimination ordinance.  The episode doesn't mention the sign or "fagots," but one has to wonder if the setting was deliberate. 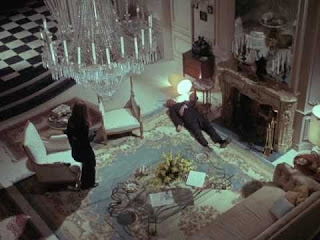 Both murderers live in huge, ornate apartments that would shame Versailles,  dripping with Ming vases and Louis XIV chairs, everybody and everything so bright and glittery that it makes my eyes hurt.  Everyone is white, upper-class, middle-aged, and well-connected. Oddly, the 1960s counterculture does not exist.  Even Leslie's teenage daughter, home from boarding school in Switzerland, does not wear mod clothes or listen to groovy music or mention student protests. 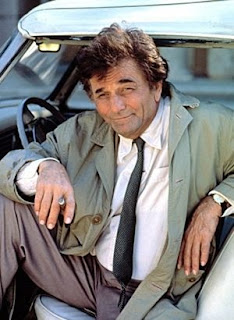 Columbo is not conventionally attractive, and his incessant tales about his wife become annoying, but still, you can't take your eyes off him. I found myself focusing on his gigantic hands, fingers as thick as sausages.  You know what they say about big hands.

There will be no other characters who appear in more than a few episodes.  It is all about Columbo. 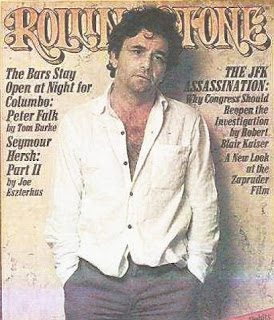