"Diaries": Junior High Hassles on the Island of Capri. But Which of the Kids is Gay? 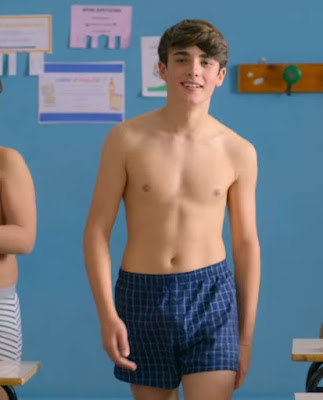 Diaries -- but you'd better stylize it as Di4ries to avoid getting your keyword search bogged down in The Vampire Diaries and The Andy Warhol Diaries -- is an Italian series on Netflix about a boy who records dirt, scandal, and secrets into his diary.   No doubt there will be some gay scandals and secrets.

Prologue: Pietro (Andrea Arru), a dreamy Italian teenager,  "almost 13" although the actor is obviously old enough to get drunk and sign contracts, addresses the camera as he goes about his day.  First he gets annoyed by Mom and Dad's constant battling, so he puts salt in the sugar to sabotage their morning coffee. 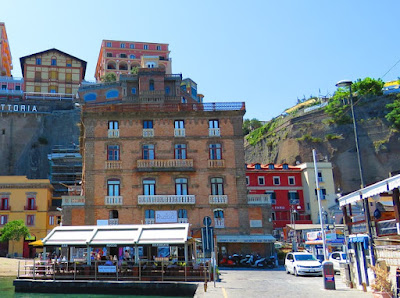 Then he rides through town -- Marina Piccola, on the island of Capri.  "the best part of my day -- everything tastes like freedom."

Opening Credits: Shots of Pietro's two friends, Livia and Giulio.  I wonder which he has a crush on?  Whoops, we're not done: Ariana, Isabel, Monica, Daniel, Grimo, Mirko...a lot of choices!

Scene 1: At school.  Pietro hates it there: too many rules, no freedom, and his classmates are all jerks.  He criticizes them as he passes:  It-Girl Ariana. Miss Perfect Livia.  Dumb-Ox Bully Grimo. 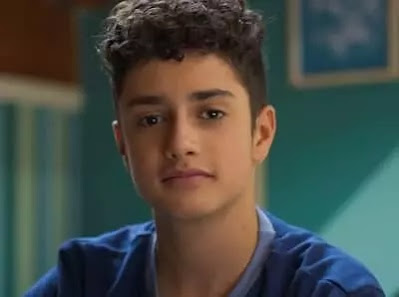 But Pietro isn't all snark: he rescues the long-haired, feminine Michele (maybe gay?) from Dumb-Ox Bully, and gets a hanger-on for life.  Next BFF Giulio asks him to cast his vote for the hottest girl in school.  Everyone else has voted except for Good Kid Daniel (Biagio Venditti, left), who doesn't want to get into trouble with the teachers. All these character names will be on the test.

Scene 2: In class, the boys argue over tabulating the "hottest girl" votes.  Whoops, the girls grab the scorecard, and are horrified by the sexism.  Especially It-Girl Ariana's Fat Friend, who got no votes!  The boys gaslight: "You're overreacting! Learn to take a joke!" and so on.

Scene 3: After school.  Bff Giulio wants to know who Pietro voted for. "Who cares?  I don't like any of these girls."  Do you like girls at all?  Maybe you're gay?  But Giulio persists, so he says "It-Girl Ariana."  Giulio scoffs: "Dude, you don't have a chance with her!  She's got a crush on me, like every other girl in school!"

"You wish!" Pietro counters.  "Every girl in the school has a crush on me!  I'll prove it by kissing  It-Girl Arianna and Miss Perfect Livia both!"  Giulio turns it into a bet.

Scene 4: Pietro and Giulio playing basketball.  Dumb Ox Bully want to play, and tries to bully them off the court. When that doesn't work, he challenges Pietro to a "five-on-five" game, your guys against my guys.  The losers will be outed as worthless garbage, and ridiculed for the rest of their lives.

Meanwhile, the girls are practicing for the upcoming triathlon.  Miss Perfect Livia's cousin Silverio watches.  They aren't very good. The coach asks him to compete instead, but he refuses, due to a Dark Secret (finally, we get to one!)

Scene 5:  Pietro needs five players for the game with Dumb Ox Bully.  He persuades BFF Giulio to play by claiming that if they win, Arianna, the Girl of His Dreams, will certainly melt into his arms.  Good Guy Daniel agrees to play; Feminine Michele offers, but they reject him.  Athletic Isabel, still fuming over the "hot girl" list, refuses: she wants to see him and his boys humiliated forever. 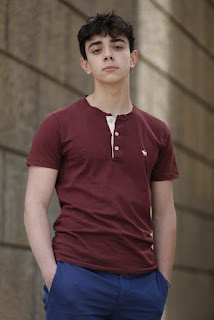 Scene 6: Math test.  Good Guy Daniel helps Quiet Boy Mirko (Pietro Sparvoli, left) cheat, even though their desks are on opposite sides of the room.  Afterwards Quiet Boy Mirko thanks him: "No problem, but next time sit next to me, to make it easier."  I hope you're taking notes.....

Scene 7: The Principal announces that the school is closing due to low enrollment.  They'll all be transferred to Marina Grande, the big school on the other side of the island (only 1.8 km away) and split into different classes.  Do I see a "Save our School" plotline ahead?

Scene 8:  Pietro playing basketball with BFF Giulio.  He contradicts what he said in Scene 1: now he loves the school and all of his classmates.  They can't be separated!  How can we Save Our School?  Good Guy Daniel arrives with Quiet Boy Mirko, whom he talked into playing.  They still need one more player, so they take Feminine Michele after all.  Montage of them playing, badly.

Scene 9: After triathlon practice, Miss Perfect Livia and her Cousin Silverio (Lorenzo Nicolo), who has a dark secret, are walking home. Pietro insults her in passing.

Scene 10:  The next morning. Feminine Michele has designed team jerseys for the big game.  Pietro and Giulio hate the prototype, but Cousin Silverio likes it: "I'd totally join your team if I knew how to play basketball."  "That's ok, you can be our cheerleader."  He jumps at the chance. A feminine coded activity.  Maybe Silverio is gay.

To get even with Feminine Michele for...um, wanting to join their team? -- Giulio pranks him with a laxative-laced muffin.

Scene 11: Remembering the kiss-bet from Scene 3, Pietro approaches Miss Perfect Livia. The best way to get a girl to kiss you is to insult her, righti?  That doesn't work, so he challenges the triathlon athlete to a bike race: if he wins, he gets to kiss her.  Livia wins easily.

Scene 12:  Morning.  Now Miss Perfect Livia is narrating.  She criticizes her sister for not being perfect, but agrees to make her bed so Mom won't get mad.  Mom comes in mad anyway: "I expect you to be perfect. That means doing all of your sister's chores when she slacks off. Get busy!"

While she is working, Livia tells us that Dumb Ox wants to take her to the movies on Saturday.  She'll have to ask Mom for permission when she's in a good mood, which is almost never.

I think this is a second episode crammed into the first, so I'll stop here. 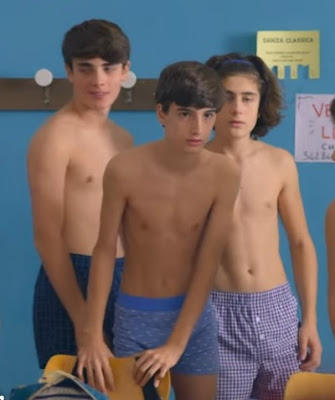 Beefcake: The boys parade around in their underwear, but they're a little on the young side.  I thought Andrea Arru was in his 20s, but he's actually only 15.

Other Sights:  Lots of exteriors on the island.

Dark Secrets: None so far.  The plotlines are all about junior-high problems, like basketball games that will seal your fate forever.

Diaries: None.  Not even a blog.

Abusive Parents: All of them, so far.

Heterosexism: All of the boys except Daniel rate the girls.  Then all of the girls rate the boys.

Gay Characters:  I read ahead in the episode list.  Good Guy Daniel comes out in Episode 2, when a girl puts the moves on him.  He crushes on Mirko, who wants to be "just friends," then gets a new boyfriend (in just one episode, but at least they kiss).

Will I Continue to Watch: Maybe.  The plotlines seem a bit banal -- the Save Our School cliche dates back to the Mickey Rooney-Judy Garland barn musicals of the 1930s -- but seeing events from different characters' points of view might be interesting.  And the island is breathtaking, making up for the lack of beefcake.