Lil' Abner: Backwoods Adonis with No Interest in Women 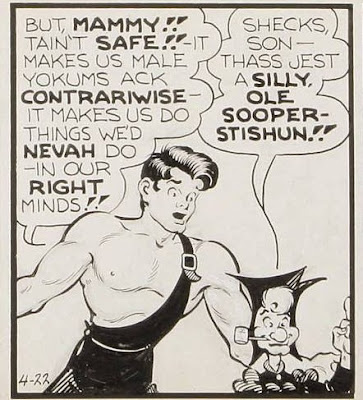 During the 1930s and 1940s, gay kids could pick up any daily and Sunday comic strip to see a muscular, usually shirtless teenager who was not interested in girls, plus a committed same-sex couple.

Al Capp's L'il Abner, started in 1934, chronicled the adventures of 19-year old muscleman Abner Yokum, his elderly parents, and the colorful residents of Dogpatch, U.S.A.  It was part of the contemporary hillbilly fad.

Books, movies, and radio programs were presenting the hills (Ozarks or Appalachians) as an untouched wilderness, an Eden inhabited by rustic Adonises whose muscles and rude manners provided a remedy for the ultra-sophistication of Cary Grant and Clark Gable.

The backwoods Adonis became a common image, extending through Jethro of The Beverly Hillbillies to The Dukes of Hazzard.

The prelapsarian state had one drawback, at least for heterosexual readers: no place for heterosexual romance.  So uninterested were the men of Dogpatch that Al Capp instituted a Sadie Hawkins Day, an annual festival in which man-hungry spinsters chased "skeered" bachelors, and whoever got "ketched" had to marry. 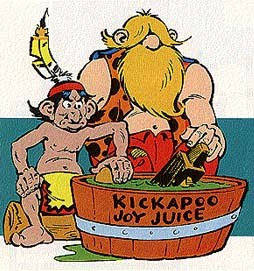 But there was plenty of room for same-sex romance, notably the man-mountain Hairless Joe and his diminuitive Indian companion, Lonesome Polecat, who live together, embark on various money-making schemes together, and even count themselves as a "married couple" on their census form.

Their soft drink brand, Kickapoo Joy Juice, is still being sold in Asia. 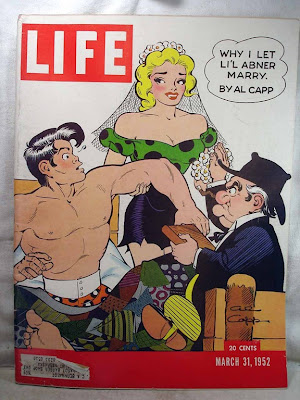 In 1952, changing sociocultural mores -- such as the increasing awareness that a man who is not interested in women may be interested in men -- prompted Al Capp to marry off Abner.  Soon he became a father.

Increasingly conservative and unfunny as time progressed, the strip pushed forward in a dwindling number of newspapers until 1977. 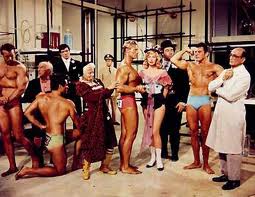 There were two movie versions of the strip.  Everyone remembers the 1959 version, with Peter Palmer as Lil' Abner, and a plot about a "yokumberry tonic" that turns ordinary men into bodybuilders but has the side effect of making them uninterested in women.

See also: Li'l Abner, the Musical; and I Go Pogo: The Gay Possum of Okefenokee Swamp