Frasier: The Gayest Show on TV, or the Most Homophobic? 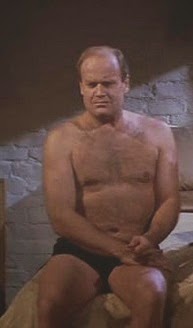 In 1993, Frasier Crane (Kelsey Grammer), the stuffy, elitist psychiatrist who hung out at Cheers (1982-93), moved back to his hometown of Seattle, Washington, where he hosted his own radio program, offering psychiatric help to callers.

Very few episodes of Frasier (1993-2004) involved the wacky mental problems of callers -- the producers thought that concentrating on the radio station would make it too much like WKRP in Cincinnati -- although producer Roz (Peri Gilpin) became a regular, and there were occasional appearances by leering, hetero-horny sports show host Bulldog (Dan Butler) and swishy food show host Gil (Edward Hibbert). 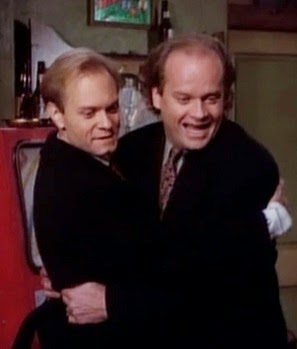 It had a huge gay fanbase.  Many gay men could relate to conflicts with their macho, working-class fathers over their interest in fine art, show tunes, wine-tasting, and chick flicks.

Plus Frasier featured the most intense, passionate, and open gay romance on tv during the period.

Frasier and Niles were boyfriends.  Ok, they were scripted as heterosexual brothers, but come on...brothers simply do not act like that.

Their relationship was deliberately written as quasi-romantic.  Even other characters commented on it.

But, to keep it from crossing over the boundary into over romance, the writers gave Frasier any number of hetero-romantic conquests, and Niles a wife plus an ongoing crush on Daphne (Jane Laneves), Martin's live-in physical therapist, who remained oblivious (or pretended to be).

And they drew pitiably few gay plotlines, and all of the most simplistic, 1970s type.

In the fifth season, Niles and Daphne are mistaken for gay, and Frasier is embarrassed when his friends discover him in bed with a man, and conclude that he is...you know (shades of Three's Company!). 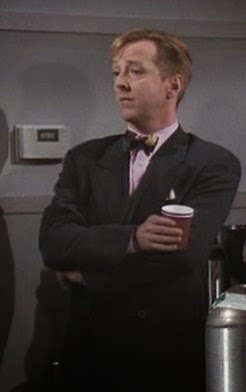 In the seventh season, Martin pretends to be gay to get out of dating a woman he dislikes, only to have her set him up with a gay man (he ends up going through with the date).

The most substantial gay plotline involved Gil the Food Critic, who was assumed gay throughout, and often ridiculed for his effeminacy,

In the ninth season, he reveals that he is actually heterosexual, married to a butch woman named Bev, and is rather offended by the gay rumors: "honestly, just because a man dresses well and knows how to use a pastry bag, people jump to wild conclusions!" 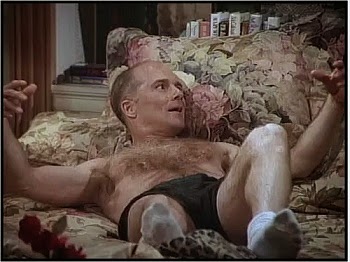 The retro, borderline homophobic storylines are particularly surprising when one realizes that David Hyde Pierce, Dan Butler (left), John Mahoney and Edward Hibbert were all gay.  That's the entire male cast, except for Kelsey Grammer.

To recap: an entire cast full of gay men playing heterosexuals, the focus character involved in a same-sex romance barely hidden under the "brothers" label, and no gay references except for a few retro "mistaken for gay" excursions.

Was it the gayest show on tv, or the most homophobic?

See also: Cheers, Where Nobody Knows Your Name; and WKRP in Cincinnati
Posted by Boomer