Are the Pantos Gay? 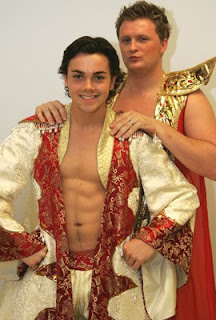 I have studied English literature, watched British tv, known people from Britain, visited several times, but before last year I had never heard of a pantomime, except as something mimes do.  Apparently people raised in Britain have fond memories of going to pantos at Christmastime, but nobody ever talks about it.

It's is a type of musical comedy performed during the Christmas season, using well-known stories.   Next winter, for instance, you will be able to attend the pantos of Cinderella, Jack and the Beanstalk, Peter Pan, Puss in Boots, Aladdin, Dick Whittington, Treasure Island, and Robin Hood (prices range from $12 to $30 U.S.)

IThe basic plot must be familiar, since it will be skewed, augmented with satiric bits, slapstick, references to current events, and ad-lib scenes.  The audience, mostly children, will interact with the cast, boo the villain, ask questions, shout "He's behind you!", and even argue: "Oh, no it isn't!" "Oh, yes it is!." 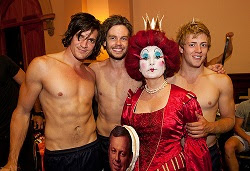 There are five standard characters, plus a chorus and various comedic players:
1. The Principal Boy, traditionally played by a girl in drag, but now more often a tv star, such as Ray Quinn of The X Factor as Aladdin (top photo), or a boy band hunk.

That explains why, when I saw Peter Pan back in the 1960s, Peter was played by Mary Martin.  And why the audience had to shout "I believe in fairies" to save Tinker Bell's life.  Panto roots.  But it doesn't explain the creepy dog in the nanny cap, or why people who aren't sick need to take "medicine."

2. The Dame, usually the Main Boy's mother, traditionally played by a man in drag. 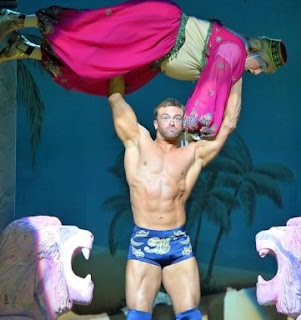 3. The Comic Lead, the Main Boy's zany friend or servant, often played by another celebrity, such as  wrestler Nick Aldis as the Genie in Aladdin (left).

4. The Love Interest, an attractive woman with whom the Principal Boy will fall in love. If the original story lacks hetero-romance, not to worry, one will be added.  For instance, in the Wizard of Oz panto, Dorothy falls in love with someone named Elvis.

5. The Villain, male, female, or a drag performer. 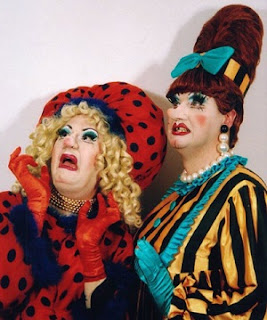 Questions immediately arise: why the drag?  What does it mean to watch a woman in male drag fall in love with a woman?  Does it ameliorate the heterosexism of the boy-and-girl plotline?  Are the pantos gay?

Maybe not.  Maybe the drag serves to accentuate rather than challenge gender norms.

Although there have been pantos for adult gay audiences, such as Peta Pan (a lesbian version of Peter Pan), Get Aladdin, and Snow White and the Seven Poofs, some gay writers who grew up with the pantos felt that they weren't "for us"

And attempts to incorporate gay characters or situations into the traditional panto have met with hysterical hand-wringing of the "It's for kids!!!!" sort.

If you still haven't met your beefcake quota after seeing a panto, check out the Boxing Day Dips, hundreds of people -- mostly cute guys -- dashing into the ocean nude, or at least wearing as little as the censors will allow.