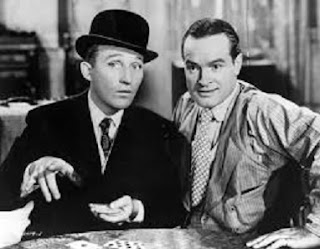 He was known for his snide, snarky one-liners -- over 500,000 through his career, contributed by an army of over 100 writers on his payroll.  Most commented on current fads, fashions, Hollywood stars, and politics.

Eisenhower admitted the budget can't be balanced and McCarthy says the communists are taking over. You don't know what to worry about these days ... whether the country will be overthrown or overdrawn." 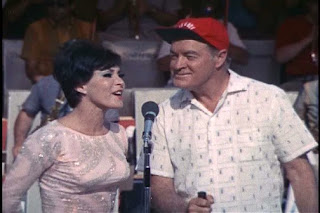 During the 1970s and 1980s, gay activists often complained about the raw homophobia in his jokes, but Hope shrugged them off: "They're threatening to get together and hit me with their purses."

Hope was performing at a dinner to commemorate the hundredth year anniversary of the Statue of Liberty.   The aging entertainer told the audience of patriotic Liberty enthusiasts, who paid $1000 apiece to be there ($2000 today):

I just heard that the Statue of Liberty has AIDS.  No one knows if she got it from the Mouth of the Hudson or the Staten Island Fairy.

Ronald and Nancy Reagan laughed, but the rest of the audience sat in stunned silence, horrified by the slur against Miss Liberty's sexual habits.  The Los Angeles Times said:

Hope's "joke" was worse than obscene. It was abusive and unworthy...It is both sad and shameful that a man who many have considered a national treasure should think it would be funny to besmirch Miss Liberty on her 100th birthday. 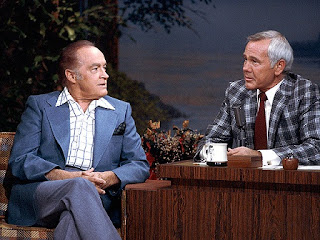 Hope continued to make homophobic jokes until 1988, when a reference to "fags" on The Tonight Show prompted GLAAD to demand an apology.  Hope agreed to participate in an PSA, which aired only on local gay tv programs:

He was amazed to discover that anti-gay violence exists?  Really?

Gay people are not mentioned in the 2015 biography, Hope: Entertainer of the Century.